Help us create Until The Quiet Comes and bring a unique story to the big screen. 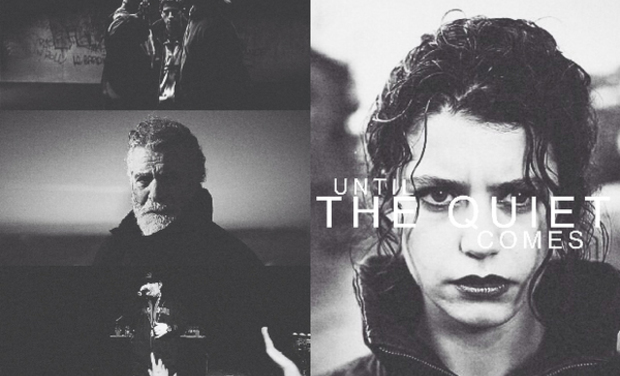 The lives of a group of Iranian/Canadians- a young drug fiend, an obsessive musician, a vengeful father and his cash-strapped protege- collide in a brutal tale set in the festering underbelly of Vancouver.

Connecting the storylines is the alleged rape of a daughter(Sarah)of an Iran-Iraq war veteran named Jamshid, who upon hearing of his daughter's rape takes matters into his own hands and decides to kill the

Linking up with Jamshid’s narrative is the story of PJ. An idealistic ex-boxer who runs a failing boxing gym where local kids train. PJ fails to distance himself from Jamshid’s plight and is eventually sucked into the whirlwind of impending drama when he decides to step in and help him

Another interweaving storyline concerns Jamshid’s teenage son--Pasha--who, onflicted by his strict upbringing and at a loss about his sexual orientation, has to contend with being constantly goaded by his friends to avenge the rape of his sister. The emotional drama is so befuddling that Pasha has become an addict. He routinely numbs himself to the hysteria that pervades his life by taking copious amounts of painkillers and shutting the world out.

Completing the arc is Pedram's story. A struggling musician who's told by his pregnant girlfriend that she wants to have an abortion. When a friend gets him a once-in-a-lifetime gig to perform at a famous venue, he convinces his girlfriend to hold off and promises her a better life.

The fate of these characters culminates in a dramatic climax with calamitous ramifications for all involved.

UNTIL THE QUIET COMES is an account of displacement highlighted by the massive 1990s migration of Iranians to Canada. It is a multi-strand story told through the eyes of a group of Iranian-Canadian characters who have been uprooted from their heritage and struggle to build new lives. At its core, the story is that of disenfranchised youth and disenchanted families on the cusp of disintegration. Misunderstandings lead to alienation, and alienation to lost innocence and slip-ups. The project is particularly original in its discussion of how an Iranian-Canadian family would react to their daughter’s alleged rape and how cultural hang-ups can be the Achilles heel of an entire generation in limbo.

A STORY WITH REAL SOCIAL IMPACT

Even though the narrative depicts the lives of Iranian-Canadian characters, the trials and tribulations at its heart speak to the universal drama that lies in the fight against cultural stigmas and the battle for self-realization. As such, the narrative will resonate across a wide spectrum of cultural backgrounds.

In addition, the film broches the complex topic of immigration.

Cinematically, this is a story that depicts a very specific generation of Iranian expats. A generation that's never been afforded a real voice.

The film's mission?  a)To confront the stigmatized social space occupied by immigrant working class in Canada and the difficulties they face in their attempt to assimilate and build new lives in their adopted country. b)To expose the eventual impotency that lies await youth who’ve been cordoned off from society through distorted cultural and familial expectations.

Our hope? To draw the attention of audiences worldwide to a dynamic community that is grossly misrepresented in contemporary world cinema.

Excerpt From The Screenplay:

*Italic dialogue is spoken in Farsi.

Iranian wartime Public Alert System can be heard on a TV somewhere. The date, 22 September 1980.

Warning! Warning! This is the Wartime Broadcasting Service. The siren that you’re about to hear is the Red Alert and means that an Iraqi air assault is imminent. Leave your place of work or residence and take shelter.

The shrill of Air Raid Sirens slowly rises to a deafening crescendo.

It's going to be alright, Pasha. Sarah, stay by my side. Get away from the window.

The sound of fighter jets flying across the sky followed by utter silence, then...

CUT on the sound of explosions to...

...the thumping sound of a HEAVY PUNCH precedes the image of an Iranian kid, PASHA (19), dressed in baggy jeans and billowing t-shirt. His eyes glazed over, Pasha appears transfixed on an object in front of him.

PULL OUT to reveal Pasha’s posse standing next to him: DAMOUN (19), taller than the rest and with a slight hunch, he wears running shorts with a white button-up shirt and looks incredibly unassuming from head to toe. ALI (19), shaved head and thick eyebrows, he wears a T-shirt with “PEACE” written across it, and finally, SAMAN (19), fair- skinned, blue eyes and straw-colored hair, he’s dressed very much like Ali and Pasha.

You call that a punch, asshole?

You go on taking those fucking

pills at this rate and we'll have to place you in nuthouse soon.

You gonna try again or what? Don't be a pussy. Make your pops proud.

An arcade style punching bag is revealed situated in the corner of the pool hall-- totally out of place-- and across from the Iranian contingent. Pasha is standing dead-square in front of the bag.

TRACK IN on Pasha as he blinks his eyes-- almost in slow motion, making it appear as if one eye blinks before the other. He staggers back a few steps, stops, gathers himself, clinches his fist and is about to throw another punch...

The  € 5,000 will be used as development money. The money we need to form (a package) suitable for presenting to investors and capable of attracting production financing. It will cover travel expenses to film markets to arrange pre-sales financing, from investors, and location scouting and camera tests. It also covers the cost of administration and overheads until the film is officially in pre-production.

Our most sincere gratitude.

Our sincere gratitude and a 'thank you' shout-out on our Facebook page and a personal thank you tweet from the director.

You will receive a high quality download of Until The Quiet Comes poster. PLUS above reward.

Signed pre-release Until The quiet Comes DVD as well as a special film post card. PLUS above rewards.

Official Until The Quiet Comes T-shirt as well as a special thanks on the credit roll of film print & DVDs and IMDB. PLUS above rewards.

A singed copy of the film's original soundtrack CD, two tickets to the regional premiere of Until The Quiet Comes and an exclusive invite to our Premiere Party where you'll get to hang out with the cast & crew. PLUS above rewards.

You will receive two tickets to the World Premiere (travel not included) or premiere of Until The Quiet Comes in your city as well as a special day-on-the-set where you'll get to see the process in person. If you don't reside in Vancouver to visit the set, you will instead receive the limited edition Behind-the-Scenes documentary. PLUS above rewards.

You are invited to exclusive pre-premiere screening of the film. Meet Director Meysam Motazedi over drinks and discuss the film during an intimate Q&A following the screening. For you and one guest. PLUS above rewards.

A special gift customized for you from the filmmaker. PLUS above rewards.