47 is a short film about the character made famous by Hitman, the internationally acclaimed franchise. 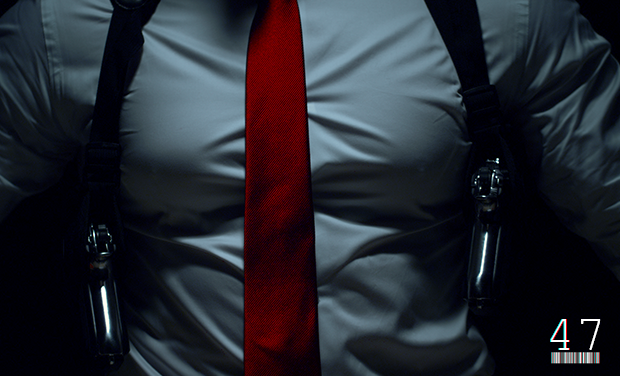 47 is sent by the Agency to carry out a hit ordered by a mysterious silent partner. However, the mission goes awry. This time, the professional killer’s impressive skills may not be enough to get him out of this predicament alive.

Created by IO Interactive and launched in 2000, the Hitman franchise has, during its evolution, been inspired in its artistic choices by many films. Throughout five instalments, the saga has developed mature and complex plots, and has gradually conquered the hearts of gamers worldwide and earned critical acclaim thanks in particular to a fascinating and highly charismatic main character.

When it comes to 47 himself, the main character of the games will obvisouly be the main source of inspiration, several film references come to mind when such a protagonist is mentioned, films like Michael Mann’s Collateral, Luc Besson’s Leon or even Joel and Ethan Cohen’s No Country for Old Men for both the character’s very meticulous side, and his violent modus operandi.

This short film aims at faithfully recreating the very distinctive atmosphere that has been a staple of this saga since its inception and to which it owes its success, and intends to show its main character as seen by the players all along the episodes. However, whether long or short, a film must not restrict its audience to people having previous experience of its source material. Consequently, this project’s other great challenge is to succeed in building a story likely to engage the fans as well as all those who have never had the chance to play the games, or who would not even know about them. Therefore, the goal is not to make a straightforward fan film, but to create a film as dark and clever as the games' screenplays, that would be accessible to a broader audience than the games' fan base.

In terms of narrative structure, direction and score, the film will intend to recreate with great accuracy the series’ gloomy, mysterious and tense universe, but the aim is also to give the short film its own unique identity. The direction will use works that have had a strong echo in popular culture over the past years as a point of reference, films such as Road to Perdition and Drive for instance, as well as TV series like Breaking Bad and True Detective.

The photography will be done with the greatest care, as it is a key element to the games' atmosphere.

This short film wants to make the most of the ideas and the codes of a gaming franchise which, since its origins, has constantly displayed a real love and obvious links with cinema.

Making this film a success would be a great way to honour a character that is now one of the most famous amongst the gaming world, and whose ever-expanding universe keeps fascinating gamers everywhere.

After having obtained a degree from the Georges Méliès film school, Samir worked on numerous projects for ads, short films, and more recently on an animated series ordered by Disney. He tried his hands at directing with two projects of animated short films that are currently in production. 47 is his first live-action short film.

With a Production/Distribution degree from the ESRA Paris film school, and a longtime ambition to become a director for quite long, Pierre has had a go at directing several times over the past few years. 47 marks his first real professionnal project behind the camera.

Charles has been a professional actor for several years. He played many parts in short films such as La Bête, A balle perdue and Paradoxe. He also played an illegal immigrant alongside Omar Sy in Eric Toledano and Olivier Nakache’s Samba, and will soon play a role in the third Season of the French TV series Falco. He recently wrote and directed his first short film, Ailleurs, in which he also played one of the main characters.

After having been part of a theatre company for four years, Laurène was trained to become an actress at the Acting International Paris school. She played various roles in short films that were presented in festivals – Anna, directed by Emerson Lefrançois, being the most significant of them – and in Les Souverains, a web series that was broadcast on the KZTV channel. The actress is also tackling new projects as a writer and director. She recently directed her first short film, Une Vie Tranquille.

Bastien played various parts on the stage, in television and in several short films after having attended the Cours Florent Paris acting school. He also appeared in advertisements.

Having studied at the EICAR Paris school, David started out in 2008 in the music video, with almost 200 videos to his credit as a cameraman and as a director of photography, before turning to short films afterwards. He likes dark universes, as seen for instance with Apoplexie's Pimpon music video clip, on which he was the director of photography, and which was nominated for the Berlin Music Video Awards in 2013.

After getting a degree in audiovisual sound in 2005, Jeff worked on several short films, documentaries and feature films. Among others, he managed the sound on two films entitled Secret d’hiver and Sous le pont d’Avignon.

Other technicians will be added to the team later on.

La Grande Table is the collaboration between two passionate composers, Tom Laporte and Louis Villain, brought together by the will to explore new musical horizons.

Thanks to his father who was a musician, Louis was immersed in a musical environment throughout his chidlhood. He then had the opportunity to be trained by Claude Samard (Rayman, Jean-Michel Jarre), and to learn from numerous experiences in this field.

Tom received an education in communication and sound techniques in order to set up a professional project around his music. Enthralled by the richness of the sounds that surround people and the new musical composition tools, he has decided to dedicate his life to it.

Therefore, it was natural for them to set up La Grande Table, as they share a common vision of music. They like to say that any object whatsoever can become a musical instrument, that one can make a drum kit out of aluminium foil. They want to create ever more hybrid music, to break the boundary between classical and electronic music, and to keep feeding on as many musical genres as possible.

47 aims at recreating in the most faithful manner the world and the atmosphere of a franchise which is liked by many people throughout the world. This obviously requires important financial means.

First of all, the making of a film is the work of a team, a team that gives its all so that the project is properly brought to completion. Therefore, the collected sum will be used for settling the technicians’ expenses, renting some filmmaking equipment (lights, camera lenses, Steadicam…) which is often very expensive – some team members have already their own -, and insuring the production department.

Part of the money will be used for renting the locations in which the film must be shot, which will be costly. Moreover, the costumes, the props and the weapons will have to be rented or tailor-made.

Finally, the short movie cannot be finalized without postproduction work. The fundraising will thus allow to finance the sound editing, the sound mixing and the composition of the original soundtrack.

If the requested sum can be seen as considerable, here is, in detail, what will the collected funds will be used for.

Renting the film sets, renting or tailor-making the costumes and the props : 1200€

The production department (transportation and food) : 1250€

For three days of shooting

The grip equipment, the choregraphies, the bullet holes : 1950€

Other expenses are to be allowed.

If the total amount that is asked is exceeded, and that the sum reaches 15 000€ for instance, this will allow to have more means for every afore-mentioned aspect of the production.

The directors have a real vision for the character of 47 and his world, a vision they hope to share thanks to you.