We want to carry out the post-production of ‘‘A Louer’’ from Peeping Tom, to keep a record of this unique and singular spectacle. 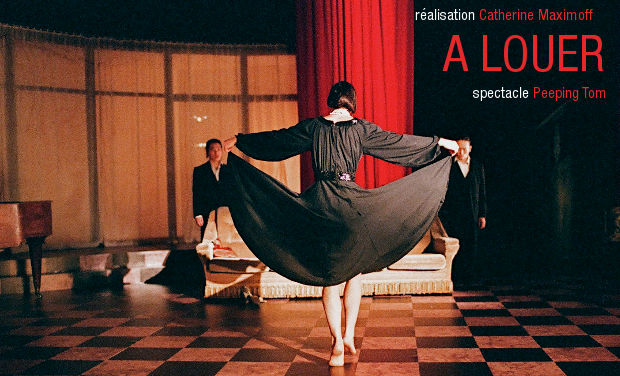 ‘‘Between melancholy and daily jokes, Peeping Tom sets up his emotional world, served by the creative energy of the dance.’’ Le Monde

‘‘Everything is true, interpreted correctly and brilliantly’’ Libération

"This inspiring performance by Gabriela Carrizo and Franck Chartier is not to be missed." Scotland on Sunday

We wish to support Catherine Maximoff in a work of audiovisual adaptation of the play ‘‘A Louer’’, one of the major shows of the dance theater company Peeping Tom, who is nearing completion of its international tour. For Rent portrays a middle class family, that has lost its prestige, and is guided by strange obsessions in a world of memories, hallucinations and nightmares.

With ‘‘A Louer’’, the company Peeping Tom invites us in an improbable place. On stage, the interior structure that appears behind large red curtain outlines an endless cavern, imitating the imitating the famous outlines of impossible constructions. A great place, that seems to abolish time and space for a better welcoming the permanent comings and goings of unusual characters, guided by strange obsessions. They play, sing and dance with brilliance and virtuosity, bordering the real world and the artistic representation. They depict a middle class family that has lost its prestige with its economic usefulness and perceived the precariousness of its privileges. The characters seem to invest in their actions, until losing many of their marks in a place that doesn’t want to freeze but perfectly reveals the challenges of theatrical space.

“A Louer” delightly raises the curtain of artistic creation and reflects the decline of representation. Desires, fantasies and anxieties crystallize on stage and breed occasionally. Peeping Tom evokes the tumult of passionate relationship while leaving the throes of creation speak on stage. Because all artistic creation is ephemeral, because the boards of the theater are rented.

For more than ten years, Peeping Tom, a group of friends who met during a production of Alain Platel and revolves around two artistic leaders Gabriela Carrizo and Franck Chartier, only to realize an surprising production, with very limited resources (Caravan, 1999), has become a dance-theater company recognized nationally and internationally. The trilogy The Garden (2001), The Salon (2004) and The Basement (2007), as well as 32 Vandenbranden Street (2009) are international co-productions, acclaimed by the press and the public, with whom the company has toured extensively. Their vast sphere of interests associated with the specificity of their dancers, gave birth to an interdisciplinary choreographic language quite singular. Result: a work intimately linked, with a unique identity. Given their dancing background, the movement and the image are the two main tools they use to ship the public in the privacy of their game. Gabrielle Carrizo and Franck Chartier define this intimacy as the act of making visible - and amplify - what is not, what seems trivial at first, which is essential but ignored or concealed. Peeping Tom puts the human condition at the heart of the project by creating productions that display parallel worlds and discontinuous universe in which the usual logic of time, space and mind is disturbed.

I have known Gabriela Carrizo and Franck Chartier since 2002, when I filmed an extract of their first play, The Garden, for my short film UZES QUINTET. These brilliant artists met when they were dancing in Alain Platel's major plays and managed to create their own world, Peeping Tom, seducing the five continents.

Nowadays Peeping Tom is one of the most important companies of the choreographic scene, and I want to share their work with as many people as it is possible.

What is at stake?

Times have become harder and harder to finance projects that aims at promoting the contemporary creation. Because of the economic crisis, more and more actors of the audio-visual industry no longer want to take risks: they mostly work with already well-known artists and therefore put a limit to the artists' freedom of creation.

In such a context, there is not much place for innovation and discovery.

That's why we hope to achieve this project, so that the contemporary creation of a talented company that talks about the world of today can be seen.

We believe that cultural diversity is really at stake here. Help us to enable independent artists express themselves!

How to support this project?

Obviously we need money to finance the postproduction of the project. But you can also support us spreading our campaign and taking part of the promotion of our project. If you want to get involved but you can't give money, you can spread the word on Facebook, Twitter, etc. This would be a really effective way to help us.

How are we going to use the money?

We need you to help us fund the post-production of the film. Filming an exceptional dance piece requires a top quality team.

As much for image editing as for sound editing, calibration or mixing; we would use a highly experienced professional tem, recognized for its rigor, its sensitivity and its ability to carry a relevant critical. These steps are considered differently depending on the production. For us, these are crucial elements in the path of an audiovisual creation. Editing for example, is a key issue that we cannot emphasize enough. Space for both reflection and orthopedic laboratory of a film, it takes time: a luxury these days, but a guarantee of quality work and expertise that cannot be reduced to a single technical aspect.