Abney Park on stage in Paris... a crazy challenge faced by the Steam Rocket, but we need you to succeed! 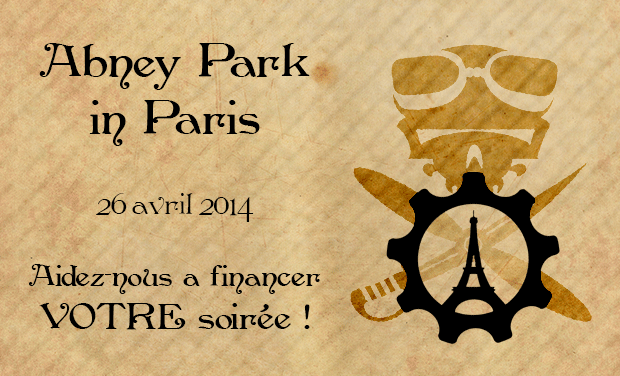 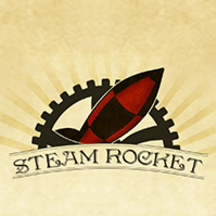 Having Abney Park performing on stage in our country has been a widespread wish since the steampunk culture took off in France thank to the passion of its community.

No matter how much you like them or not, these Americans from Seattle indisputably are the reference band in the genre to this day. Bringing them to France was a real challenge because of distance, limited budgets of associative events and other material difficulties.

And then the occasion showed up, we discussed a long time with the band, and… They decided to support the Abney Park in Paris project!

Within the framework of the Steam Tour, the Steam Rocket and Abney Park present to you their first concert in France, in Paris, on the 26th of April… With your contribution!

Steampunk is a cultural movement taking the Industrial Revolution era as an historical inspiration and background and mixing it up with invented technological devices, events and societal elements. It proposes a kind of imaginary XIXth century, and uchronic reality, a science-fiction in the literal sense.

Jules Verne is considered a spiritual father of the genre. His novels about extraordinary explorations, inventions and machines are a great source of creativeness for the whole subculture, and are especially favored in France.

Abney Park is a music band which officially joined the steampunk culture in 2006, quickly becoming the musical icon of the community. With a sound mixing rock, pop, electro and world music, Abney Park music is symptomatic of the movement itself, diverse and rich of combinations.

The group portrays itself as the crew of and aerial vessel, HMS Ophelia, led by their captain Robert Brown towards astonishing adventures around the world.

The Steam Tour is a concept created in 2012 by Eva Sally from Chronoxyde and Thibault Hycarius from Steam Rocket. It involves gathering the vaporistes (members of the French-speaking steampunk community) each year and get them to discover new cities from a steampunk viewpoint. It is simple: 3 cities, 3 teams of local organisers and 3 week-end of findings, encounters and festivities!

On the first year, the Steam Rocket got the ball rolling in Paris, followed by Toulouse and Nantes. On 2013, Metz, Bordeaux and Marseille hosted successively the event. This year, Paris is back for the kick off with Abney Park, Lyon is planning to be up to the task and a third city is yet to be chosen…

Greenbrier Provider: our gratefulness + one Steam Tour Paris badge to be claimed at one of our events

Big Button Technician: Greenbrier Provider compensations + an exclusive Steam Tour Paris 2014 card by illustrator Tiffanie Uldry, to be claimed at one of our events

Pedaler Member: your ticket for the Abney Park concert in Paris!

Archivist of the Great Sagas: your ticket for the Abney Park concert + Big Button Technician compensations + a poster autographed by the band

Guidage Guide: your ticket for the Abney Park concert + Big Button Technician compensations + one Abney Park CD autographed by the band + one of the last copy of the Guide Steampunk autographed by Arthur Morgan and Etienne Barillier!

Adventurer of the infinite: Archivist of the Great Sagas compensations + on Sunday, a game of enigmas with the band in Montmartre, organized by our partners from Qui veut pister Paris?

Slayer of Technical Problems: your ticket for the Abney Park concert + Big Button Technician compensations + presence during rehearsals and possibility to see behind the scene + you’ll displayed on our Wall of Fame

Compensation Agent: your ticket for the Abney Park concert + a badge + a card + an autographed poster + an Abney Park CD autographed by the band + a surprise gift from one of our partners + you’ll be displayed on our Wall of Fame

Astrophysicollectionist: your ticket for the Abney Park concert + a diner with the band (food at your expense) a badge + a card + an autographed poster + an Abney Park CD + you’ll be displayed on our Wall of Fame

Sky Walker: all compensations, meaning: your ticket for the Abney Park concert + a badge + an exclusive illustration + an autographed copy of the Guide Steampunk + an autographed poster + a CD + participation in the game of enigmas with the band in Montmartre on Sunday + the diner with the band + a surprise gift from one of our partner + a bottle of absinthe + you’ll be displayed on our Wall of Fame + a card of HONORARY MEMBER of the Steam Rocket allowing free and unlimited access to every event we will be organizing for life!

After consultation with the band, it breaks down as follow:

On top of that there are the expenses for Kiss Kiss Bank Bank and those for the secured payment process allowing us to collect.

We have opted for the risky formula and decided to propose a concert ticket below 20E, because we wanted this event to be affordable for as many people as possible. To reach the goal of 10 000E, we need around 590 persons to buy just a ticket.

12 000E would give us greater security and possibilities, and allow to get a truly great Parisian concert hall!

Every french steampunk voluntary group and association organizing events has to work with limited funds, and we are no exception, and this is why we need you!