Help us to finance a documentary film about the Populus Summorum Pontificum pilgrimage! 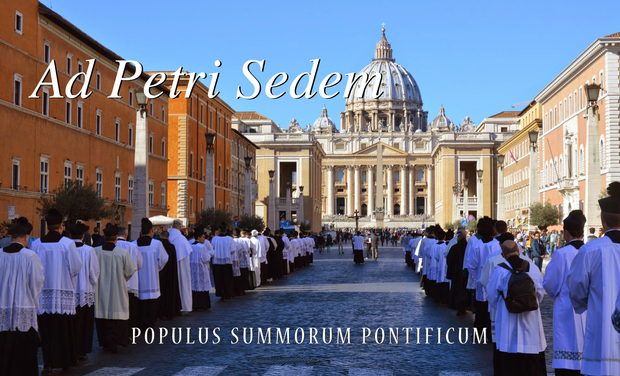 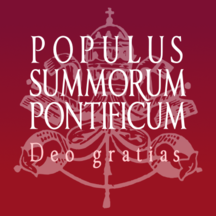 Ad Petri Sedem, the documentary film about the fourth edition of the Populus Summorum Pontificum Pilgrimage, is online!

A pilgrimage to Rome

Every year since 2012, the Populus Summorum Pontificum pilgrimage takes place in Rome and gathers thousands of Catholics attached to the Extraordinary Form of the Roman Rite (Mass according to the Missal of St Pius V).

Organised in a spirit of peace and unity around the Traditional Mass, the pilgrimage attracts many faithful, men and women of all ages, lay people or members of the clergy, from around the world.

This initiative is a way to show the vitality and youth of Tradition.

More than a simple event, this pilgrimage at the heart of the Eternal City is, before everything, an act of devotion and filial piety close to the Pope.

Just as the previous years, the pilgrimage will consist of several ceremonies, culminating with the celebration of a Pontifical High Mass in St Peter’s Basilica on Saturday.

Vespers on Thursday, as well as Friday and Saturday Masses, will be sung by the Schola Sainte Cécile, a Parisian choir led by Henri Adam de Villiers. Sunday Mass will be sung by the vocal ensemble Cantus Magnus, led by Matthew Schellhorn, a recognised British pianist.

Why a documentary film?

Even though it is important for us to promote the pilgrimage, this film will be first and foremost a testimony.

More than a coverage of the events of the pilgrimage, we want this project to highlight the aesthetic and spiritual richness of the Traditional Mass, heart of our commitment. In this way, in agreement with the director, the formal approach will play a crucial part.

This film will enable the particpants, simple pilgrims, celebrants or members of the organisation, to speak and help others to understand the fervour and devotion characterising this pilgrimage which, at the origin, was supposed to be a one-time event.

The film will be produced by Les Films du Lutrin, a new French production company currently producing a documentary film about the Schola Sainte Cécile. The DVD of the film is planed to be released in September 2015.

Thanks to this fundraising, the director will be present during all the pilgrimage and the film, of an approximate length of 15 minutes, will then be broadcasted on the Internet.

The footage will also be used to make a trailer announcing the 5th edition of the pilgrimage which will coincide with the closing of the Holy Year proclaimed by pope Francis.

If we quicly reach this first goal, we would have the possibility to reinforce the film crew with a second cameraman.

With a second cameraman, the director would have more camera angles choices. This would bring to the film a greater richness at the aesthetic level, especially for the ceremonies.

Moreover, due to the better coverage of the pilgrimage, the editing could be extended to 26 minutes, corresponding to TV broadcasting standards.

In the event that our goal is not met, all contributors will be automatically reimbursed.

Do not hesitate to talk about the project, without your help this fundraising will never succeed!

For the personal prayer intention during the pilgrimage, you can send us specifications at cisp@mail.com. Please, indicate "Intention" in the subject of your message.

Concerning the T-shirt, you can choose between man or woman style, as well as the size (S / M / L / XL). We will do our best to satisfy your demand subject to availability.

This fundraising is supported by REGINA MAGAZINE.

Our most sincere thanks

Our most sincere thanks + Personal prayer intention during the pilgrimage

Our most sincere thanks + Personal prayer intention during the pilgrimage + Schola Sainte Cécile album "O Felix Roma" + Name in the "special thanks" end credits + DVD of the documentary film about the Schola Sainte Cécile + Book "Remaining in the Truth of Christ" signed by H.E. Cardinal Burke (EN, FR, IT, ES, DE & PL)