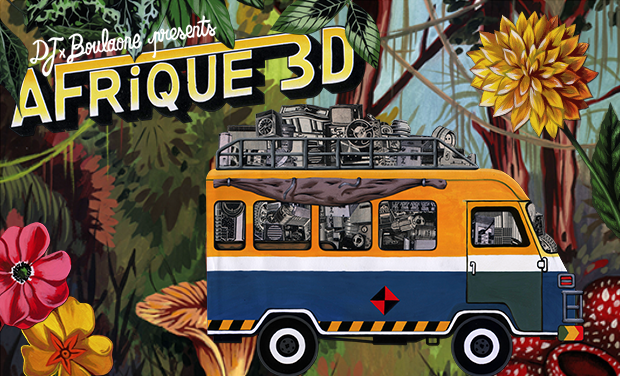 Afrique 3D suggests a three-way multidimensional travel through continents related by common history : Europe, Africa and the Americas. Revisiting traditional and contemporari ages, the record is a real journey in space and time.

The project presents simultaneously a musical and a visual exploration of the oral African culture. The three dimensions of time and space are chronologically represented by ancient samples, recent vocals and sounds of futuristic instruments. As lyrics are written in English, French, Swahili, Lingala, Yoruba and Wolof, we oscillate between modernity and tradition.

"The idea of this spatiotemporal trip came up along with the encounters I made during my lasts tours" (Amazigh Kateb, Gnawa Diffusion, Aka Moon, Sandra Nkake, Ronny Jordan, Grazzhoppa's dj Big Band, Trans West Africa ...). From Mauritania to Kenya, stopping by Senegal and Congo, the concept of this record naturally unfolded itself : Afrique 3D was going to be the first "Coast to Coast" of the African continent.

Afrique 3D also features great artists from Philadelphia and Los Angeles, invited to endorse the "Coast to Coast" concept that, in the history of American rap music, once referred to the pacification projects led between the West and the East coasts. As the record does, they embody a return to the Afro-American roots and advocate peace between the different communities.

Even though musical issues and artistic question are detached, I thought it quite relevant to gather French and English speaking artists who sometimes shared the same ancestral dialect. This creative process mixes everything up, creating new bridges between these continents and erasing a little more the existing land boarders.