After "The Ballad of Genesis and Lady Jaye", Marie Losier makes a film about Alan Vega. Join the adventure! 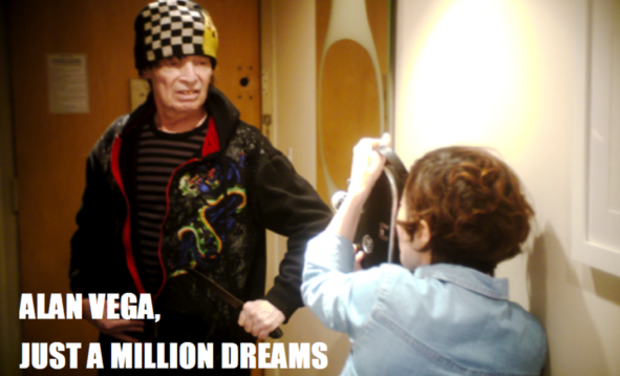 We are delighted to present to you, Marie Losier's new project and short film - Alan Vega, Just a Million Dreams

It is an intimate portrait of Alan Vega and his family, his wife and collaborator Liz Lamere, and their talented son, Dante.

Alan Vega is the singer of the mythical electronic protopunk duo band SUICIDE. He is also an established artist, known for his his neon/light sculptures.

Marie's film was mostly shot in NYC in their apartment in Wall Street. She also shot his recent concert in Paris, this past April with Liz, Dante and Marc Hurtado.

We are about to start the editing of the film for the film will be screened by october in many festivals already (Bordeaux, Athens, Coppenhagen, Seville...)

This is the reason we need your help!

We are grateful to get the support of the Centre Pompidou thanks to Geraldine Gomez, and be able to edit the film in their space. Yet we really need a budget to be able to make the film come to life and finish it.

Please help us supporting this beautiful project for the film to see the light!

Thank you so much

PRESENTATION  OF THE PROJECT

I first saw Alan Vega eight years ago at the Knitting factory where he was playing with Suicide. Watching him perform was enchanting and provocative; I was screaming the lyrics with everyone in the room full blast!

Funnily, I came to see Vega but ended up meeting Genesis P-Orridge; I accidentally stepped on Genesis’ foot. S/he was watching as well, before performing with her band, Thee Majesty. I knew nothing about Genesis at that moment. But that fateful night started a seven-year adventure during which I created a feature film about Genesis, his partner Lady Jaye and the band Psychic TV.

Alan Vega’s aura sparked my collaboration with Genesis and my first feature, The Ballad of Genesis and Lady Jaye. The gift goes around. Eight years have passed and, in a typically miraculous New York City coincidence, I met Alan. I am now making an affectionate portrait of Alan, his wife and collaborator, Liz Lamere, and their son, Dante.

I am a filmmaker who shoots, directs and edits portraits of New York-based artists. My interest is in work that transcends traditional boundaries between music, painting, film and theater. I have collaborated with Guy Maddin, The Kuchar Brothers, Tony Conrad, Richard Foreman and Genesis P-Orridge among others—artists whose subversive spirit inspires my films. These “autobiographical portraits” defy the conventions of classical documentary, addressing the unique and personal relationships that develop between my subjects and myself. In surrealist fashion, I collect, deconstruct and playfully reassemble the stories and images I capture, employing animation, superimposition, décor, costume and song in an attempt to reveal hidden personal truths. My most recent film portrait, The Ballad of Genesis and Lady Jaye, premiered at the 2011 Berlin International Film Festival. The Ballad won eight awards and screened in 73 film festivals. It is currently in theatrical release in the U.S., Germany, France, Canada and Mexico.

These portrait films are not traditional, chronological accounts of the artists’ lives, but intimate and whimsical glimpses into their past and present, reenactments of crucial moments in their lives, and revelations of aspects of their personalities that are largely hidden from view. Inspired by the filmmakers of the silent-era, as well as experimental filmmakers like Jack Smith and May Deren, I use techniques such as superimposition, reenactment, tableau vivant and animation to draw out the hidden, the magical and the touching. I shoot (on16 mm film with my Bolex), direct and edit my film portraits—on my own always.

I sense a lot of tenderness and vulnerability in Alan; this is what immediately moved me and compelled me to bring my camera into our friendship right away. After a heart attack, Alan walks with difficulty and sometimes struggles to find his words. Yet his brain is still acute, stubborn, rebellious and hilarious. Alan speaks about death often, a mundane topic, part of his daily routine. But his presence is attentive, thoughtful, funny, calm and centered. This is what I am capturing with my camera: his incredible being, our friendship and my deep respect for him.

You can watch the teaser of the project:

We need money to finalize the post production of this film.

The film will be at the Bordeaux film festival the next 4th October at a party special Marie Losier and Jonathan Caouette.

- The Finishes (mixing and calibration)

If by a miracle our campaign exceeds the proposed budget of 10.000 Euros, and come close to 15.000 Euros, we will be able to output the film on DCP! All participants who will support the film above 400E, will have their name in the final credit with the name of the producers.

YOU HAVE YOUR NAME AT THE GENERIC

A PRINTED BAG WITH A PHOTO OF THE MOVIE + PREVIOUS REWARDS

PHOTO SHOOTING OF YOU BY MARIE LOSIER + THE PACK 50 euros