With a little help, Balaphonics will be able to record its very first album. A unique, soulful sound you can’t hear anywhere else! 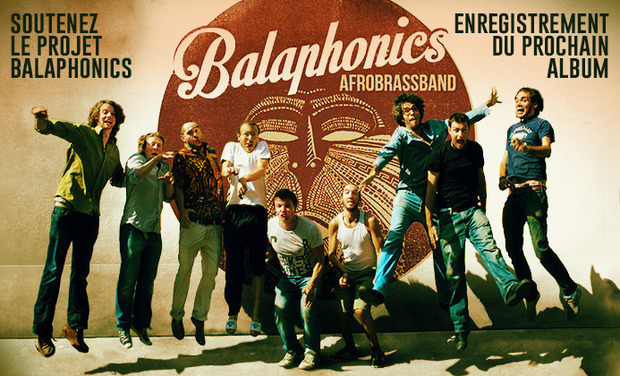 For those who don't know us, the Balaphonics idea was born 3 years ago around Mathieu’s dinner table. Half-drunk, we started talking about balaphone- these West African wooden xylophones. We imagined mixing the power and energy of a brass band with the magical resonance of the balaphone. And Balaphonics was born. The first rule was to make original compositions; the second one, to be inspired only by the African music; the last one, to have fun! Each musician’s background is different but we fall into two main categories: the "brass band players" and the "jazzmen". The "brass band players" are used to performing on the street; they’ve come from a handful of groups- Ouiches Lorènes, Grizz-Li, Omega, the Fines Pôlettes, the Gros Tube and Ratamar. The "jazzmen", on the other hand, have busted their chops in Paris’s rich jazz scene and played in festivals from Reykjavik to New Orleans. We have members from Arat Kilo, Zarbituric, Julien Daïan, Abdul & the Gang and Blitz the Ambassador.

Two busy years have flown by: a bunch of concerts, some videos, a 6 track EP record, an aborted 4 track, the production of a mobile balaphone system, and an awesome music video still in the works. We have twenty kick-ass compositions- equal parts hypnotic groove, scorching brass, and bombastic balaphone. Equally comfortable on the streets and in the concert hall, Balaphonics has grown into a tight, cohesive unit.

Our first EP was recorded at Studio BO by Maxime Monin in 2012. At the time, we needed to record something quickly and cheaply, so people could get a taste of our sound. The result is a unique, soulful record but falls far short of what we are capable of.

It's time for us to make the quantum leap by recording an album that we can all be proud of. Our tunes deserve professional treatment: A state-of-the-art studio, microphones, sound engineers, and whatever else it takes.  Balaphonics has grown up since our first EP- in the way we play, compose, and arrange. Now we need to find the right technology to let our music shine. We’re experimenting with different microphones and recording techniques, learning to give each element of our sound its proper color and balance.  We’ve decided to record at Studio Midi Live, the old Vogue Studio. A lot of French 60s hits were produced here- the work of legends like Serge Gainsbourg, Jaques Dutronc, and Johnny Halliday- even Marvin Gaye.

We are still deciding who has the right touch for mixing and mastering our tracks. One very appealing choice is Grant Phabao from ParisDJs, an expert who has our trust and full respect. We have already spent one year preparing for this recording. We’re waiting now, We are more than ready to spend an entire week in a studio and craft the album we were all born to make and give to posterity the essence of our music.

In the meantime check out this live music video:

As you can hear, the sound is not really good...

We plan to record at least 7 tracks, and possibly more. Depending on the time and the quality of the recording we’ll see how many tracks we are going to include on the album (we have about fifteen tracks in stock anyway). One of the tracks will provide the soundtrack to an animated short. What we’ve seen so far- funky gazelles, hyperactive kaleidoscopes- looks incredible. We’ve already begun production with, lucky us, the consummate professionals at ParisDJs. Remixes are already planned, and we’ve talked to a few incredible singers about potential collaboration on album tracks.

And here is a preview of the soon-to-be-released animation:

Here are some mouth-watering previews of what we plan to record. The sound quality is not ideal here, but that’s why we need a studio!

This money is a necessity for the recording process. We’re a big band- 9 people with large instruments. We need a large studio to fit the whole group! Then, a long process: Mixing the recorded tracks, balancing every sonic element. Mastering, optimizing the mixes to suit all kinds of audio devices- from headsets to your uncle’s flashy living room hifi system. And finally, printing the CDs themselves, complete with striking packaging.

Obviously, those are approximate prices and may vary according to whom we will choose to do each step. But from our experience with other groups, we’ve learned that quality is well worth the money. Of course, if we find a less cost recording studio, we would have more money to make a better mix or press more Cds or be more generous with those who support us.

Balaphonics has earned this chance! Help us distill our hard work into a professional album, the masterwork of funk that we were born to make!

Get the digital album on WeTransfer! Easy to hear everywhere + acknowledgement on our balaphonics.com website as well as in our Facebook page.

Get the real Cd at home* as soon as it’s ready with your name in the special acknowledgements on the booklet. *Shipment payment supply if not in France

Cd* + a concert ticket + limited edition exclusive poster (to collect after the concert or by shipment*) + acknowledgement on our balaphonics.com website as well as in our Facebook page. *Shipment payment supply if not in France

Cd* + a concert double ticket + limited edition exclusive poster (to collect after the concert or by shipment*) + official acknowledgement on the Cd booklet. *Shipment payment supply if not in France

Cd* + lifetime concert access! + limited edition exclusive poster (to collect after a concert or by shipment*) + official acknowledgement on the Cd booklet. *Shipment payment supply if not in France

Cd* + private concert ! + limited edition exclusive poster (to collect after a concert or by shipment*) + official acknowledgement on the Cd booklet. *Shipment payment supply if not in France