Allumez le feu by Mansara, a french project of steampunk music clip, in the dream world of the singer Mansara... 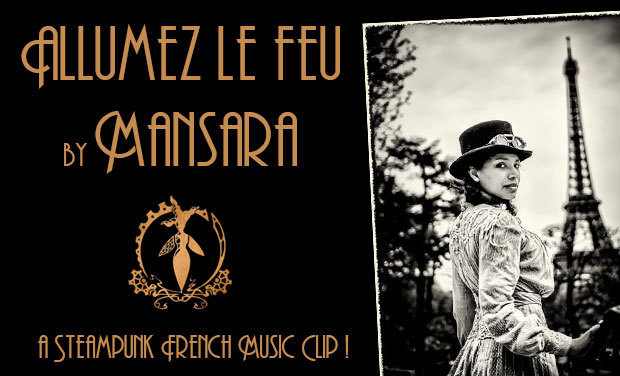 Realizing legitimate and ambitious Steampunk videos in France has very rarely been done before, but it's not impossible!This is the crazy challenge my team and I have taken up …

The cover of the French song « Allumer le feu » (lit up the fire), by Johnny Halliday, is part of my new artistic path. I have decided to take full ownership of my style, even more than I have ever done before, and really go Steampunk all the way, becoming a part of that artistic movement.

Our goal as a team is to manage to tell the story of Mansara, through different ways: the album, first of all, but also through concerts, events, videos, and others productions in the making.

This project is also dear to my heart because it's when I got the idea for that video that I really discovered the Steampunk movement, so it's a very symbolic move for me, a new step in my artistic life.

That said, we really need your support to make this music clip !

The Steampunk movement in France is still in expension, and although we have found a solid team to join us, we need funding to pay for the all the technical expenses that cannot be reduced.

We would like to shoot the video right after we collect the money, in June 2015. That will also allow us to see the result sooner !

This video is also your video, we need YOU !

It's the story of a perfume... a perfume of love, or shall I say, the perfume of Love itself. In those days, Love is  gone, it cannot be found in the hearts of men anymore, but in some places you can still find traces of it... A strange scientist has decided to synthesize it and give it back to mankind... Starting with a perfume and a voice, he will try to find this lost essence...

Meanwhile, at the Johnny's Club, the crowd forgets for a moment, for a night, the ongoing class warfare.Together, people will suspend time to feel this love again, carried away by the perfume and the voice that fascinate the scientist...

Forced to settle in the 20th century,after many travels through the ages, Mansara passes the time singing, because for her it seems to be a nice way to live.

The DNA of this unconventional artist can be found in the work of Tim Burton, Claude Monet, Jules Verne, and in the music of Bjork, Zazie and Sade. She finds inspiration in everything: daily life, music,painting, movies,history. She's putting songs together,influenced by various styles: pop, electro, jazz,soul, world music and many others.

She's telling the story of her many adventures, the people she met, her doubts, anger, nostagia and the sweetness of life. All this in an « Art Nouveau » atmosphere, a Steampunk cloud. She is charming us with her music.

Discover Mansara in a live session, with a cover of « Nature Boy » by Nat King Cole

They are Mansara's musicians,  multifaceted artists with many talents, they follow her in her dreams... and they also play a little part in them.

Graduate of the prestigious Ecole Nationale Supérieure Louis Lumière, Paul Prache is a young director who is very comfortable with fictional universes. He is very good at telling complex stories and recreating timeless atmospheres, so he was the right person for that project.

He will work with cinematographer Charles Lesur, and chief electrician Raphaël Auger, as well as their respective teams. Morgane Maurel (camera) and Loeiz Perreux (assistant camera) will also be part of the team.

Hydragency specializes in Steampunk and fictional universes. For this project, their Studio department works on creating the sets for the video, and their agency department is a partner.

PRECISIONS ABOUT THE COMPENSATIONS

Badges, Stickers and T-shirts: they are made especially for this occasion, and the models will be revealed during the campaign !

USB Keys: they are in wood, customized by Mansara, and they will contain hours of bonuses of music from the band, live sessions, and many more surprises...

Collector Shooting Pack: the guided tour will allow you to discover how a professional shooting works, what is the role of each team member and their part in this very efficient ballet behind the scenes...

Private Concerts: you will set a date with the artist, costs of transport and housing are not included.

Caracters from the Mansara Trilogy: the Trilogy of books is in the process of being written.It will tell the story of Mansara and her adventures in details.More than just complementing the album, they will be real novels who will be published in the near future!

Many surprises about the Trilogy are to be expected during the campaign also...

The physical compensations will be given during one of our events. We will organize one especially for our crowdfunding supporters don't worry !

The full amount will be used to finance the video as follows :

We would like of course to have ambitious sets, in order to create the right atmosphere,but also high quality equipment, in order to have a finished product up to what we imagined.

If we raise more money than what we've asked, in our wildest dreams,according to the amount, we could reinvest in new equiptment to make the final product even better in terms of quality and finishing touches.