Ten solidarity concerts, multicultural bridges, a sharing space which we invite you to join, thanks for helping us launching Âmes Latines! 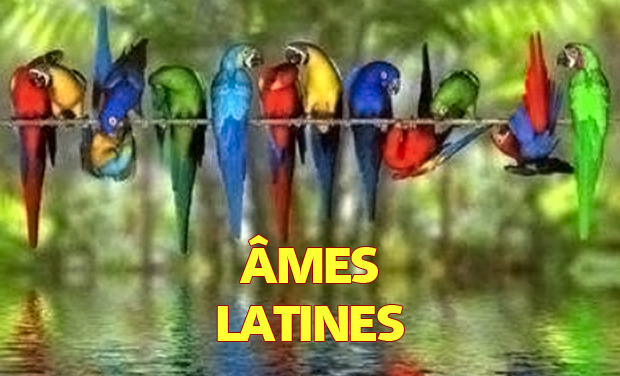 Lusophone music (sung in Portuguese) and its range of influences, in particular African music, is presently attracting increased interest in the variety sector, classical music and jazz, which is perhaps due to the fact that the world is in a changing mood: this music reflects the complexity of the Latin soul. It mixes at the same time rhythm and nostalgia, bringing a desire of partying while generating emotions around the "saudade" which is so specific to the Lusitanian world. This music brings in itself a weight of history, a gathering of Latin souls; it speaks about human feelings, but also about our planet. It is one of the most beautiful examples of cultural, racial and artistic cross-fertilisation. It has influences inherited from African rhythms, from Fado (itself nourished of Brazilian influences originating from the African Lundum); including Samba, Bolero, Bossa Nova; to Nordeste music from Brazil. Numerous South-American artists (in particular Brazilian) also open themselves to songs from the francophone repertoire, which they interpret, translate and arrange, thus creating a cultural bridge which has been reinforced over the years.

The objective of the Âmes Latines (Latin Souls) programming is to develop exchanges between Lusitanian (of Portuguese origin) and other cultures through concerts illustrating the richness of Latin Soul’s music. We want to generate emotions with music and poetry, and exchanges between varied people who would not otherwise meet, in order to share ideas and experiences. In a first place, the programming proposes ten concerts to be organised in professional venues located in Brussels. The musician’s network which is described below largely supersedes the musical dimension. It constitutes a genuine sharing space between Latin America and Europe, which may lead to events open to all publics. If collected funds allow, the project will invite musicians based in Brazil to join the international musical community of Âmes Latines. Each concert will be filmed and a video will be prepared and mounted in the form of DVDs. On longer term, the project will plan to record a CD representing the different bands. For the first part of the project (which is subject to the collection of funds), the 2014 cultural programming will be presented in a leaflet describing the various concerts and musicians on the given dates (one concert per month, excepting the two summer months). This leaflet, with a print run of 10,000 copies, will be distributed from the end of 2013 by the programme’s responsible and the selected concert venues. In addition, posters will be produced and displayed in various public places. For each concert, tickets with the poster illustrations will be produced professionally. All promotional documents (leaflets, posters, tickets etc.) will make reference to supported charity associations and the sponsors (Kissbankers). A communication campaign will be planned from the end of 2013 through emails sent to a private network of 1,500 contacts and a contact network of the European institutions (more than 5,000 contacts). In addition, concerts will be announced on a Facebook page (more than 1,500 contacts) and announcements will be diffused in the Press. It is hoped that the concerts will attract between 150 and 200 (paying) participants at each occasion, which corresponds to a mean audience of the six last concerts (organised in 2012-2013). The estimated budget takes this mean into account.

The multicultural theme of the concerts, solidarity, sharing of ideas, a public originating from international networks, quality venues for private or professional meetings, advantages adapted for the sponsors, these are the many aspects which justify a sponsoring request by the Arte N’Ativa Association for the organisation of ten charity concerts, enabling to raise financial help (based on the paying entrances to concerts) for partner charity associations. In case the amount fixed for the collection is superseded, the programme will finance in priority transport and accommodation expenses of musicians “off Brussels”, including musicians based in Brazil (for an amount estimated at 5,000 euros). It will also be envisaged to record a CD illustrating the programme Âmes Latines (estimated amount of 7,000 euros), which will be proposed for the future programmes if the success is met.

Musicians of the “Âmes Latines” Programme offer a range of musical styles which you will be able to discover in videos through links that are included in the descriptions below.

Renato Martins, Brazilian percussionist of international reputation has chosen to establish himself in Belgium to discover new horizons and musical paths. In his CALATRIO band, he is associated with two musicians, Cláudio Rocha (saxophone and flute) and Victor da Costa (guitar), to play a Brazilian repertoire made of Samba, Baião and Choro rhythms.

The Goiabada Quartet interprets a variety of rhythms of Brazilian music such as sambas, choros and baioes. Baden Powell, Tom Jobim, Edu Lobo and some personal compositions are in their programme. The quartet is composed of Victor Da Costa (guitar), Claudio Rocha (Saxophone and flute), Marat Araujo (bass) and Augusto Rego (drums, percussions).

Artist of international dimension originating from Bahia, Osman Martins has been established in Brussels since 1987. He has performed along with great names of Brazilian music. His band Samba da Candeia illustrates the breeding of Brazil around a repertoire made of South-American rhythms, Samba, Salsa, Pagode, Baião, Afoxé, Chorinho and other Brazilian rhythms.

The band Forró Pau Xêroso has been borne from the desire of showing the traditional Brazilian forró, mixing other dancing music from the Nordeste such as Baião, Frevo etc. It is composed of Maurice Blanchy « Zé Momo » (accordion), Augusto Rego (percussions), Dioni Costa (vocal) and Marat Araujo (bass)

The chôro is a a mix of European music such as polka, mazurca and waltz with African rhtyhms such as lundu and jongo. The Roda de Choro of Brussels is formed by Brazilian and Belgian musicians who interpret music of great composers such as Pixinguinha, Jacob do Bandolin, Valdir Azevedo, etc.

Fusion between Brazilian Jazz, Samba and other Brazilian rhythms

Cíntia Rodriguez gathers several talents: dancer, singer / composer, actress… Her style is a fusion of Jazz, Samba with a touch of Reggae and Pop as illustrated by her CDs Arco Iris (in which Toots Thielemans participates) and Nega Revoltada. She is accompanied by Sérgio Valente (piano), Marat Araujo (bass) and Tony Reina (drums).

Blue Bossa Liberté gathers three artists joined to compose and improvise Brazilian music in all its afro-rhythmic, melodic and harmonic diversity, with jazz influences. The trio is composed of Cecilia Peçanha (vocal, guitar), Matheus Groove (percussion) and Daniel Bartos (bass), who interprets great names of Brazilian music and their own compositions.

Bossa nova and bridges towards Francophony and Jazz

Bossa Flor is born from the passion of Philippe Quevauviller for Bossa Nova and the links which he has established between Brazilian music and the francophone repertoire. The band is open to styles around Brazilian music (bossa nova and samba), jazz and songs from the Anglophone and Francophone repertoire adapted to Brazilian and Jazz rhythms. It is composed of Philippe Quevauviller (vocal), Fernando Barros (guitar, vocal), Wellington Barros (piano), Berny Hoste (horn), Marat Araujo (bass) and Jacques Gillet (drums).

Some Jazz in Bossa Nova, Funk poured in Samba, a mixture which describes well the Tamango Bossa Quartet band which invites you on a musical journey where the instruments underline the sensuality of 2 female voices, Nathalie Defoort and Valérie Lécluselle, accompanied by Frédéric Pluskota (bass) and Olivier Westrelin (percussions).

The Swing à Jo trio expresses Django Reinhardt’s swing and melodies in a subtle mix of guitars and double-bass. It is composed of Gilles Boujo (guitar), Eric Mercier (guitar) and Robertino Mihai (double-bass).

The Orchestre Toubab plays original compositions by Robert Falk, which are inspired by the melodies and rhythms of the tropics (Brazil, Senegal , Congo, etc.). With pleasant and warm melodies as well as inspired improvisations, this is a music for all curious minds. With Robert Falk (Guitar), Benoit Leseure (Violin), Gauthier Lisein (Percussions) and Alessio Campanozzi (Double-bass).

With the mission to promote Lusitanian music, the D’ARTE association has recently produced the ESPELHOS (Mirrors) CD in which the Portuguese poetry is sung by Cristina Rosal and Ana Milena Gaspar and accompanied by the musicians Pierre Gillet (7 strings guitar), Miguel Rosal Martins (Bass and double-bass) and Thibault Dille (Accordion).

In addition to the ”Âmes Latines” musicians described above (all living in Brussels or surroundings), the project gathers artists sharing a similar musical passion who are willing to participate in the project. In order to cover travel and accommodation expenses, additional funding sources will have to be found to enable their participation in the programme, which will be possible either if the crowfunding collection is above the amount fixed for this campaign or if financing out from the campaign are obtained.

Originating from Portugal, Amália Baraona has grown up in Brazil, and charms us with the discrete and rhythmic singing of someone who has Bossa Nova and Jazz in her blood, as illustrated by her CDs Mulheres and Menescantando. She regularly performs in quintet or duo with her husband Dinko Stipaničev (guitar, vocal).

Paulo Costa, originating from Salvador de Bahia, has been nominated as ‘Ambassador of Bossa Nova in France’ since his interpretation of the song Toulouse of Claude Nougaro in Bossa Nova in 2008. He shares his life between Paris and Brazil, and regularly performs in concerts in quartet or solo (guitar, vocal).

Bena Lobo produces a music made of a mix of Samba, Baião, Afoxê and Xote, as illustrated by three CDs in which great names of Brazilian music participate such as Chico Buarque, Edu Lobo (his father), Milton Nascimento, Seu Jorge, João Donato and others. His is currently about to release his fourth CD, Valentia, which includes new compositions.

Born in a family of poets and singers, Jota Veloso is a great composer from Bahia who defends, with his music and culture, the roots and the overall artistic expression of the Bahianese people. With his band “Cavaleiros de Jorge”, he has performed in national and international tours since 2007.

Pierre Barouh has built his life in the audio-visual world. It was the music of the movie of Claude Lelouch Un homme et une femme which has made him famous in the entire world. Prolific author-composer, founder of Saravah Editions, we owe to him successes such as La bicyclette and movies which became cults such as the recently reedited Saravah. He also interprets his songs, accompanied by talented pianists such as Jean-pierre Mas or Pierre-François Blanchard.

Jean Marc Dos Santos is a story teller and a singer. From Lisbon to Rio, through Marseille, its last harbour, this artist who his friends tenderly nickname the “ethnic incident” explores various trends of the Brazilian Popular Music (MPB) and the francophone repertoire.

The Catalan pianist Jean-Pierre Mas has always had a Latin soul close to the one of his friend Claude Nougaro. His CD LATINALMA unites Pierre Barouh, telling poetry, and two singers: Elvita Delgado, Venezuelan, and Sheyla Costa, Brazilian. They transport us in a universe made of tangos, boleros, rumbas and sambas.

The funds will enable to cover expenses related to the organisation of concerts and ensure that the entrances will be integrally used to support partner charity associations. The mean budget for a concert is 4,000 euros, covering:

• Renting of concert venues, amounting to 600 € per concert as a mean, covering sound equipment, lighting and assistance of sound engineer and technician

• Musician’s fees, estimated at 1,800 € as a mean for concerts involving between 10 and 15 musicians (based in Brussels or surroundings)

• Filming and mounting videos, and recording concerts for an estimated amount of 800 € per concert

The fund collection aims to cover the expenses of 10 concerts, thus an estimated total amount of 40,000 euros. Taking account of the fact that the networks of the Arte N’Ativa association and of the different musicians involved in the programme reassemble more than 5,000 contacts, that we estimate at 20% the rate of response of these contacts, and that the mean contribution of the “Kissbankers” is 40 €, the overall collection of the funds should be made possible.