A California girl and a French band are recording one stellar album together. Your advanced purchase will bring beauty into the world! 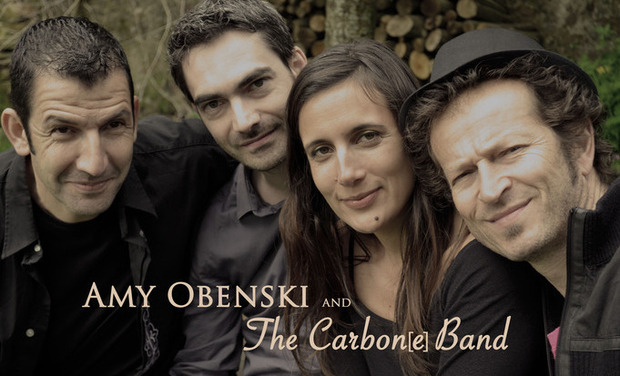 Our current goal in Part I of our project is 2180 euros.  That goal will get us a digital version of the album.  Once we reach 3780 euros, we can also produce the CD.  If  3780 euros is not reached during Part I of the project, we will launch a Part II in 2014 to finish the CD.

"Clearly Today" from the Amy Obenski & The Carbone Band 2013 Demo:

Two years ago I made plans to visit Europe for one month to play my music. Before my trip I had a concert in San Francisco (where I live). A French gentleman came up to me afterward to talk to me about the show. Since I was headed for Europe soon I asked him what he thought of me performing in France. He was very intrigued by the notion and said he would introduce me to his friends and family there. He told me he knew some musicians…

Before I knew it I was being taken in by an extraordinary musical community in Nantes, France.

My first visit to France was only a week. I met Philippe Crochet (multi-instrumentalist), Josselin Sebille (Bassist) and Mourad Aït Abdelmalek (Percussionist). They were the members of my new band! I also met Christophe Loquet (Sound Engineer and brother of my French/San Franciscan friend). I met everyone in their families and it's just too many people to mention! But I quickly became to feel included in their group. During this week we had two rehearsals and two concerts and it was an unforgettable experience for me.

The music exploded into a lush, multidimensional, energetic concoction that I could have never imagined on my own.

Three days after my return to the U.S. I couldn’t get the new sounds out of my mind. I made the unprecedented choice to return to France seven months later. During that visit I spent one month with the band, who began calling themselves The Carbone Band. We played many concerts in and around Nantes, France, and recorded a demo. It was clear at that time that there was more music to create together.

My visit with The Carbone Band this year is four months long. It’s hard to believe I’m here. Playing music with a band in France is something I never would have predicted for my life.

During my lengthy visit we have three different projects: Playing as many concerts as possible; participating in an Artist in Residence at Maison des Arts; AND recording our very first album together!

And thus, now, we’ve created this fundraising project to make our album possible!

If you haven't heard my music before you can listen by visiting my official website:

We feel that the confluence of French and California culture is the real special part of our music.  However, the logistics of crossing the world to create music together is expensive and time consuming.  We truly need your financial support to make this happen.  Otherwise, it is virtually impossible.  If you have heard the music and want to see and hear more, please consider helping fund our project.  Thank you so much!

Receive the Digital Download of the Album as soon as it's finished, before it's release!

You get the "I believe in you" Package! This includes the Digital Download of the album plus the limited edition 2013 Amy Obenski & The Carbone Band Poster, signed by the whole band. You will also receive an I.O.U. letter from Amy, good for one copy of the physical CD when it is released.

Amy will call you anywhere in the world to personally thank you. You will also receive the "I Believe in You" Package! (Described above under 25€)

You get the "True Fan" Package! This includes the limited edition Amy Obenski & The Carbone Band DEMO, with a personalized autograph from the whole band. The demo includes a previously unreleased version of "Clearly Today" and the English/French song "English Melodie" written by Amy Obenski and Phil Crochet. Plus the package includes the Poster, the Digital Download of the album, and an I.O.U. letter from Amy, good for one copy of the physical CD when it is released.

Amy will record a personalized "Thank You" video just for you. She will send it to you in an email and post it on Facebook (unless you request to be anonymous). You will also get the "True Fan" Package! (Described above under 75€)

Amy will send you her hand written French translation of your favorite Amy Obenski song. You will also get the "True Fan" Package! (Described above under 75€)

Amy Obenski will record a video of your favorite song and send it just to you with a big thank you at the end. You will also get the "True Fan" Package! (Described above under 75€)

Join Amy for a personal Skype Concert! The time of this concert will be mutually agreed upon. You will also get the "True Fan" Package! (Described above under 75€)

Amy will write a song for you about the subject of your choice. She'll record a solo version and send this to you in MP3 format. You will also get the "True Fan" Package! (Described above under 75€)

Amy will write a song for you about the subject of your choice. She'll record a solo version and send this to you in MP3 format along with a live video performance of the song with a special "thank you" at the end. You will also get the "True Fan" Package! (Described above under 75€)

Have Amy Obenski & The Carbone Band do a private house concert for you and your friends within 150 kilometers of Nantes, France. The timing of this concert will be mutually agreed upon. You will also get the "True Fan" Package! (Described above under 75€)