Back the project, and receive the first 100 % plant-based antiperspirant ! Modern, efficient, and perfectly safe... 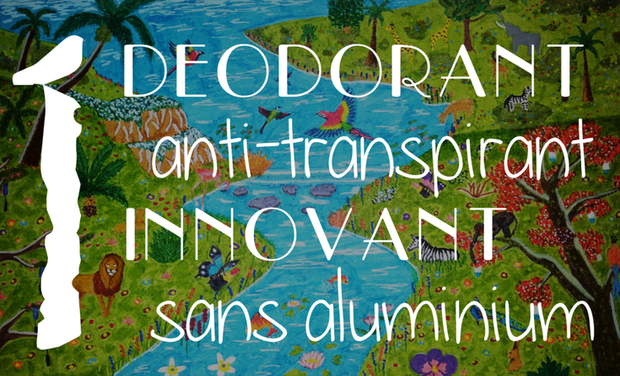 A new wind blows through the world of deodorants… Here and there can be seen a new claim on some labels: “aluminium free deodorant”. Why this commercial argument?

Why… Due to some articles coming from scientific research, having rung the bell regarding the safety of aluminium salts in cosmetic products, thus raising the awareness of consumers. One article has especially raised concerns about possible links between breast cancer and the use of underarm cosmetics containing aluminium salts [1]. The accumulation of aluminium in the body is furthermore suspected to be a contributing factor to the development of Alzheimer’s disease [2]. This is of particular importance when you consider the fact that it has been proven that the sole underarm application of a formula containing aluminium salts leads to the absorption of small aluminium doses [3].

Moreover, three national agencies (France in 2011, Norway in 2013, and Germany in 2014) in charge of the safety of cosmetic products, each concluded that "based on the current knowledge, aluminium in cosmetic products cannot be considered safe" [4].

So… Ready to try an antiperspirant at the cutting edge of research, and benefiting from a breakthrough innovation? :)

Bees are foraging… Flowers smell delightfully good… We are in the Garden of Eden, everything is perfect here… Animals are basking, while Eve and Adam just finished their morning jogging. They have sweated, and although they could just go under the waterfall to wash, impossible for the moment, they have to take care of the elephants! They nevertheless jump in a special area of their property: the cosmetic Garden of Eden…

Here, an explosion of smells and colours…make-up, soaps, creams, perfumes, shaving foams, toothpastes, deodorants, everything can be found here! Everything, but the original couple would like to see its garden be enriched with new species, especially on the periphery, so that the boundary becomes more blurred between the garden of cosmetics, and the garden of plants… What a wonderful creation it would be, having new hybrid species, between cosmetics and plants! A biodiversity to carefully preserve, so that it can develop even more…

Today, surprise! Eve and Adam discover a new species at the end of the garden… The plant is graceful, and the fruits reveal a myriad of bottles with an intriguing name: “plant antiperspirant”…

In the world of antiperspirant, essentially two types of products can be found:

Some consumers are looking for non-aluminium cosmetics, willing to limit the aluminium absorption by the body, or willing to apply a precautionary principle (see the heading “For further information” in the end).

This project concerns an innovation in the field of antiperspirants respecting this choice of non-aluminium products, without compromising on the antiperspirant performances.

A scientific project needs funds, all the more difficult to find that the effectiveness is not yet proved. But demonstrating the performance of an innovative concept demands also important resources, because of the laboratory equipment and the raw materials needed to succeed. So, how can it be done?

How??? By appealing to your help, you who is perhaps waiting for more non-aluminium cosmetics, or who is simply wanting to contribute to more diversity in the field of cosmetics! :)

Figure 1: the research and development for the creation of a non-aluminium antiperspirant

I am working on the research of the ideal non-aluminium antiperspirant solution (stage 1 of the figure) for more than a year. Numerous avenues have been explored, forming little by little a coherent, innovative, and promising whole. This stage 1 is thus complete.

What’s next is creating the formula, and test it (stage 2 of the figure)! But this stage 2 demands several steps requiring money…

First step, the production of the plant-based active substances, for a first experimental validation of the deodorant and antiperspirant properties of the formula (green on the figure). This step requires on its own 39.000€ of investments, corresponding to this crowdfunding campaign.

The next step (red on the figure) is the master key of the project: the safety and in vitro performances evaluation of the formula. If the fundraising goal is reached before the end of the campaign, the extra funds will allow the financing of this new step :). The remaining needed sum will be raised from investors and/or bankers, to who your contribution will carry weight!

I am asking tor your help at this step of experimental validation of the concept. As all research programmes, the concept still has to be validated, even if the results of my research have convinced me of its relevance. The project is based on a non-conventional approach, and on innovative plant-based ingredients. It is furthermore a starting point for many more applications that I can reveal for the moment, but that will lead to a new generation of cosmetics.

By contributing to the project during this second stage of development, you will receive before everybody the antiperspirant that you will have helped to materialize! Of course, this will be done in compliance with the European legislation (rewards only sent once the safety tests are done, once the labelling is in accordance with the rules in force, etc.). You understand that all of this takes time, that is why I commit to sending your rewards in March 2016 at the latest, that is to say a year after the end of the crowdfunding campaign.

My name is David Ménétrier (see here my Linkedin profile). I am a chemical engineer (French equivalent to a Chemistry MSc). Having a passion for plants and natural therapeutics, I have had the opportunity to discover in companies and laboratories the world of medicinal plants, essential oils, and plant-based cosmetic actives. I had the good fortune to be trained by people passionate about their fields, and that have initiated me to the mysteries of their know-how and of their science.

I noticed the scarcity of cosmetic products using essentially plant-based products, and not only a small percentage in the formula to make it look “green”. Referring to my readings, my training, my experience, and my encounters, a coherent whole gradually appeared in what could become a new generation of cosmetic products: Products that show that an alliance between mankind and plants is not only possible, but also allows the arrival of safer and better cosmetics for us, and more respectful of the Earth.

Near the city of Lyon. I am accompanied in my entrepreneurial project by one of the 29 “PEPITE” in France. PEPITEs are student centres for innovation, transfer, and entrepreneurship, spread throughout France. They offer personalized guidance to students and young graduates in their project, after selective entry. I submitted an application in the PEPITE of the University of Lyon “Booster l'esprit d'entreprendre BeeLYS” [translation: boosting entrepreneurial spirit], which selected my file.

A new fundraising campaign will be launched among investors in order to finish the second stage, and begin the next one (see figure 2 below), namely the conduction of a clinical study to assess in vivo (that is to say on healthy volunteers) the performances of the antiperspirant formula. The success of this study will allow the use of the “antiperspirant” claim for the product.

A company will also be created, consisting in a laboratory and a cosmetic production plant, with a team having complementary skills and competences, for an industrial production and a distribution on the market of the non-aluminium antiperspirants.

Figure 2: evolution of the project after validation of the safety and performance of the plant-based actives

The funds will allow the conduction of the seed stage of this project of non-aluminium antiperspirant, namely the experimental validation of the discovered concept.

Several items of expenditure have been identified, with a total cost of 39.000 €.

Figure 3: distribution of the costs for the seed stage of the project

Your contribution will allow the purchase of the laboratory equipment and raw materials necessary for the validation of the concept. Thanks to you, I will be able to elaborate the plant-based actives of the antiperspirant according to my preliminary research (stage 1 of figure 1), and thus have a first validation of the dual deodorant and antiperspirant properties of the actives of my research efforts.

For your contribution, thank you from the bottom of my heart…

Your gift will allow the project to take a great leap forward… Your support is invaluable!

[5]       EUROPEAN COMMISSION, consulted on 04 December 2014, List of the antiperspirant actives authorized in Europe: