At the age of 97 Marthe Cohn is ready to share her extraordinary story with the world in this documentary. Join the making of "An Unusual Spy"! 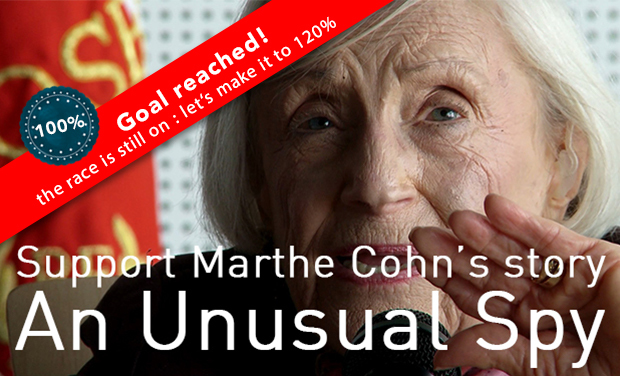 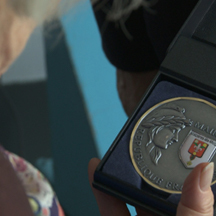 An „Aryan“-looking Jewish lady spies on the third Reich for the French army!

After the war, she doesn't speak to anyone about her experiences. Now, 60 years later, she tours around the world with her life story.

Only 1,40 meters of size and snow-white hair: That is Marthe Hoffnung Cohn. She is a superstar among the „WWII-witnesses“, she is living history. Her lectures are booked out, the organizers kiss her hand and her Facebook posts get thousands of „likes“.

Marthe story sounds entertaining and is prepped with punchlines, she had not let tragedy rule her life: Four years, she flees from the Nazis throughout France. After the liberation of Paris, she enrolls in the French army to contribute officially to the fight against the Nazis, who killed her fiance and sister. Due to her German skills, Marthe is transferred to the French Secret Service and is smuggled into enemy's country where she provides important information about German troop movements and helps to shorten the war.

Then, Marthe remains silent for 60 years. Now, at the age of 97, she tours around the world with her life story in an almost obsessive way. Marthe has a new mission, a message to spread: “It's always possible to fight injustice.”

Marthe was brought up in a large Jewish family in Metz (Lorraine). In 1939 her family flees to Poitiers and in 1942 further to the South of France. During this time her fiance gets shot by the Nazis and her sister is deported. After the liberation of Paris in 1944, Marthe enlists as a nurse for the French army. When her German skills are discovered, she is transferred to the French Secret Service and sent to Germany. After 13 failed attempts, she finally manages to cross the border. To stay undercover, she assimilates with the enemy.

Her investigations about German troop movements finally help to shorten the war and Charles de Gaulles rewards her for her achievements. After the war, Marthe meets the striving doctor Major L. Cohn. The couple moves to the USA in 1956, where they get married and have two children.

For 60 years she keeps quiet about her past. After receiving the French „Medaille Militaire“ in 2000, she publishes an autobiography and starts traveling around the world to tell her story.

The film consists of three entwining and alternating storylines:

The first layer shows Marthes public appearance. This includes her lectures, her interaction with the audience, her invitations, and honors. Additionally, private situations will expand insight beyond the public figure. Marthe talks in everyday conversations about her past. These are moments when the live action image turns into animated scenes to illustrate the narrative.

The animation will be the second layer. It visualizes the significant pathways in the protagonist's life. Through the animation, Marthe's stories will be transformed into the present.

The third layer contains footage of calm and personal interview situations. By looking into her face and the vivid eyes, the audience will get another perspective on Marthe's personality.

The animation technique uses a mixed material method combining hand drawn figures with oil and acrylic paint, worked on with the images of Marthe's past. The animation takes Marthe's memory and the historical layer of the film and develops into moving images. Marthe's experiences and the connected feelings like fear, humiliation, anger, and bravery get beyond the historical context and become “timeless”.

When I met Marthe in Los Angeles 2015, I immediately noticed her sparkling eyes. This small, 97-year-old woman spread more energy than some 20-year-old and I knew: I need to make a film about her!

Marthe's story is one of flight, loss and the daily battle to survive. But she never let the tragedy rule her actions and she kept it all to herself to start a new life. She has a very strong character and yet a young spirit and constant curiosity. Something in Marthe's personality touches me deeply.

I believe that Marthe's unique story in connection with her vivid being and her sharp humor will bring up universal life themes and touch many people.

Marthe is doing all she can, at the age of 97 touring non-stop, but we can bring Marthe's story to a wide audience and with a beautiful artistic interpretation. As a group of ambitious filmmakers, we are gathering all the support we can get.

The support of some major film funds is already secured, but now we want to make it at the best possible level, the way that Marthe deserves. For that, we require just a little bit more and that is why we make this campaign. Support us bringing this story to the big screen.

The animation is a complex process, it takes much time and many talented people working on it. As a low-budget feature length film, we try to make the most of what resources we have. Thanks to the support of the different film funds and partners, we have been able to make the film come so far. And now we ask for your help with the last parts:

- Drawing by hand with watercolor and acrylic paint

- Frame by frame photography of images

With the money we raise in this campaign, we will be able to deliver Marthe's memory in animation which will form the film's unique character.

Thank you for helping us make this a reality!

Every little bit helps! We will list your name (or pseudo if you prefer) on the Website of the Film.

First step forward! We will send you a digital postcard of the film to thank you for your support. And your name will be added on the website of course.

The "name dropper" - Great! Your name will appear in the end credits of the film under "our crowdfunding supporters". Plus previous rewards

The "collector"! You will receive by (regular) mail a printed image from the animation in the film, in a 10x15 format perfect to be framed and decorate your desk, wall or bookshelves.

The "DVD limited edition collector"! Once the film is on DVD, you will receive a unique copy, personally signed by the film's team and including a printed animation frame made by Aline Helmke. In addition we will send you a digital 'thank you' postcard of the film, and your name will be added under our "Thanks to our crowdfunding supporters" credit.

The "fine collector"! That is a very generous support and we have something unique for you : we will send you a one-of-a-kind original image from the film's animation work by Aline Helmcke + previous digital rewards.

The "Behind the scenes supporter"! You will be invited to a private screening of the film during the post production process. + previous digital rewards.

Organize a private screening for your family & friends (or members of your association) ! We will provide you with a HD screening support and depending on where you are located, some of the crew members could also show up and make an introduction speach.

Welcome on board as an "Executive Producer", this credit will appear independently from the crowdfunding group in the film's credit roll, and you can consider yourself as a patron of the arts!