AND EVERYBODY LIKES TO STOP AND SPEAK 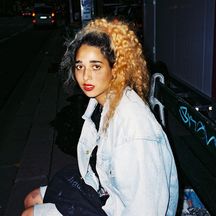 AND EVERYBODY LIKES TO STOP AND SPEAK

AND EVERYBODY LIKES TO STOP AND SPEAK IS a 30 minutes experimental documentary, written and to be directed by Tabita Rezaire.

The film will be shot in Maputo, capital of Mozambique from mid December 2013 to mid January 2014.

The project has the support of le Comptoir Général (ghetto museum) and the Collective 35A (association of artists-filmmakers).

And everybody likes to stop and speak is an essay, a poem, a scream of hope. The film takes place in Maputo, capital of Mozambique, and explores as much as it questions the place of cinema in this country. The film also intends to share the intimate but radical struggles of the young generation.

And everybody likes to stop and speak pays homage to the revolutionary Mozambican film movement of the 70's KUXA KANEMA and looks in contemporary society what remains of this political cinematic enthusiasm. By considering the screen as a site for social and political engagement, my film explores the hopes and despairs of Mozambican militant movements notably focusing on issues of gender and LGBT rights, questioning also the place of the camera and the filmmaker in this country and its combats.

Fragmented identities mirror the broken narrative of the film, which aims to create a dialogue between history, fiction and reality.

And everybody likes to stop and speak, which takes its title from Bob Dylan’s song Mozambique, shows us a nuanced landscape; it is not only pretty girls and an aqua blue sky but a delicate dance between tradition and modernity.

And everybody likes to stop and speak relies on an aesthetic at the boundary of art, and documentary practice, where these two disciplines meet, and the boundary in between collapses.

This film is not only capturing a reality but is creating one, and modifying it constantly by playing with cinematic codes. The narration is broken, fragmented, alternated, superimposed, thanks to lying subtitles, full texts on the screen, silent dialogues, close-ups on a screaming mouth and on dancing butts, tinted by ideological criticism, grotesque metaphors, the images laugh at your face and bewitch your body.

And everybody likes to stop and speak creates a dialogue between image, sound and text so as to produce different layers of narration. This film will ask questions without giving answers, it is ‘a film which thinks’ (Godard) but which criticises its own thinking.

The film is to be understood as a pamphlet, a glimpse into some lives and personal struggles with yet a universal character. I believe in a socially engaged cinematographic art, which, far from excluding fantasy and spectacle, seeks to bring the viewer into an intellectual reflection by simultaneously provoking a tactile and sensible experience. With its bewitching, caressing and aggressive images, And everybody likes to stop and speak, wish to bond aesthetics with politics.

The visual aesthetic of this film is crucial, each scene is visually thought depending on the sound or text corresponding so as to create a dissociation or amplification of the filmic language. The search for sensuality in the image guides And everybody likes to stop and speak, towards images that talk to the senses first, and through the senses, reach the intellect.

The visual universe of And everybody likes to stop and speak is colourful, the aesthetic of the film is pop and conscious of all the paradoxes that this choice produces. Pop politics? Pop Africa?

These questions traverse the film, combining elements of geopolitics and postcolonial theories with the resisting bodies on the screen. The use of sound and text makes the relationship towards images more complex as they take a different meaning, often critical. A dialectical relationship operates between the three languages. Sound, text and images are in conflict.

Confronting the image, attacking discourse, multiplying the voices, to bring into being various layers of understanding.

As Michael Renov wrote, the essay film is known for its ‘tendency towards complication _ digression, fragmentation, repetition and dispersion _ rather than composition.”

And everybody likes to stop and speak does not look for any truth; it is a thought of images in between art and criticism.

MO-ZAM-BIQUE who are you?  Your help will enable me to make this film, so as to explore a rich cinematographic and historical past along with burning contemporary issues. Through my film you will have an insight into Mozambican culture, a glimpse of its atmosphere. It is the occasion to fund a cultural and social initiative.

As I recently invested in the camera with which I will be shooting this film (Camera Sony NXCAM HXR-NX30E), your ££££ will help me finance the cost of :