A performance art film, fiction on a journey, a tragedy, a universal history, a return to the greedy past ... Participate in the project 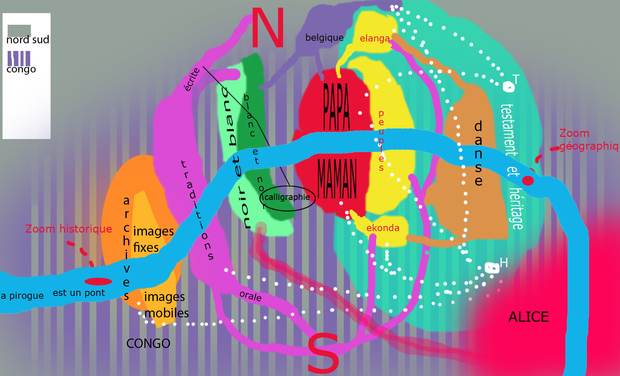 Presentation of the artist
Christian Botale works to create links between various fields of knowledge and thoughts of the North-South network. The architecture of the drama, the colonial traces, the emission and the reception of the current worlds. The study of instability and chaos. Christian Botale appropriates different forms of expressions and languages ​​of life. It brings together techniques from experimental research and different mediums. He claims the actualization of inheritance transmitted by word of mouth by the South and the writings of the North. Every day, he gets up with an inexhaustible rage, to shout the aesthetic farce that runs through his organs. The modern world of machines, digital interpersonal, political, cultural, social and media feedback. It's about finding the source of my burns. To dialogue with the original practices, to bring back their substance in an electronic amplification.
ART
http://http://www.b-fies.it/2018_supercontinent2/christian_botale_molebo.html
PRESS
https://www.poly.fr/retour-par-anvers/
Model of the pirogue. wood, rubber, nails, wheels, 1m x 17 cm
© Anne Derivière
THE FILM  (Synopsis)
A film, fiction of a journey, the return on board a canoe, a collection of objects, Nkisi, masks of the Congo ... A canoe leaves empty from Strasbourg to Brussels-Tervuren, to the Museum Royal of Central Africa. She is then in charge of the objects. She moves to the port of Antwerp, and berths at the port of Boma (Congo). She goes to the port of Matadi then leaves for Kinshasa. Restoration and installation of objects at the National Museum of Kinshasa. Performative actions take place during the making of the film. The canoe, the objects, Nkisi, are carved, adapted to the staging. Fiction generates the reality of the questions asked by Congolese. They talk about their heritage that must certainly return to the origin. They ask themselves questions about the survival of their visible heritage in Belgium. Is it important that these objects continue to be where they are? Do they think they are well preserved? If these objects were not deported, would they be visible? In which state ? Who do we have their status as works of art? I decide to carve my own versions, I put them at the heart of my work. I am searching for the truth between what is written in the North and what was transmitted to me by word of mouth from the South. I position myself between a memory, a tragedy around a culture. I discovered the huge collection of Congolese objects ceded to Belgian settlers in Tervuren. A nonexistent heritage in my country.
PORFOLIO
http://christianbotale.org/wp-content/uploads/2018/05/2015_2018.pdf
Model of the pirogue. wood, rubber, nails, wheels, 1m x 17 cm
© Anne Derivère
Studio visit residency. Live Works at Centrale Fies, Dro, Italy 2018.
© Roberta Segata
Studio visit residency. Live Works at Centrale Fies, Dro, Italy 2018.
© Roberta Segata
http://   http://www.liveworksaward.com/

IS SUPPORTED BY THE REGION OF GRAND'EST AND THE DRAC, CITY OF STRASBOURG, ASSISTANCE TO THE INDIVIDUAL CREATION 2018 OF AN AMOUNT 8 000 euros (ACQUIS)

At first, I launch a goal to 5000 Euros, to support the progress of the project, if the goal is exceeded, it will join the total cost of the budget ...

Remain to Finance 26,348 whose distribution is:

(See detailed budget at the bottom of the page)

From the workshop © Christian Botale.

The different places of residence include research time: documentary archives, interviews, meeting with restorers, actors of the circuit of works of art, craftsmen and artists. Historians and sociologists ...

The canoe is carved on a tree trunk, dismountable in 4 parts. Eleven sculptures to make and eleven paddles. The boxes of sculptures for their movements. 2. The departure, the journey. Residence 2, Brussels, 2 weeks. Residence 3, Antwerp, 1 week. From Strasbourg, the canoe is empty on wheels, it moves with a push of hands for an hour on the sidewalk and on the bike path from point A to point B. Micro-performance is achieved. The camera films his journey and the photographer makes stopped images. Arrival at point B the canoe is dismantled, stored in the truck which already contains the boxes with eleven sculptures. Brussels direction 440 km instead of the residence 2. From this new point A canoe is mounted empty, moves an hour with the same operation to point B through Brussels. The canoe is disassembled again, stowed in the truck direction Tervuren 13.4 km. Arrival at Tervuren, the canoe is again up from point A, moves empty to the main entrance of the Royal Museum of Central Africa. With the authorization of this institution, the sculptures in the crates will be lowered from the truck to be arranged in temporary spaces in the Museum. The camera turns, the performance is to take these boxes out of the Museums and place them on the canoe with choreographies, costumes and rituals. From this same point, the canoe travels one hour on Tervuren to point B in the same city. The canoe will be dismantled, stored in the truck with the crates of sculptures direction Antwerp 49 km. Arrived at Antwerp residence 3, the dugout is mounted again, this time with the crates containing the sculptures, and moves from a point A closest to the seaport, at point B, the water. The camera is spinning, the performance is an attempt at symbolic launch without risking drowning. The camera is cut off. End of the achievement part Europe. The canoe is dismantled, stowed in the truck with crates direction Strasbourg 474 km. It's back in the workshop.

A new canoe is carved in a tree trunk, removable into 4 parts. Eleven new sculptures to make and eleven paddles. The new boxes of sculptures for their travels. All pretty much the same. A workshop with students of Fine Arts 4. The departure, the journey. Residence 5, Boma, 2 weeks. The canoe and the crates with the sculptures leave from Kinshasa city, to the port of Boma in a truck, 444 Km. Arrival at the port, the canoe is mounted with crates on it. The camera is spinning. The performance is the fact of removing the canoe from the port in order to bring it back to town with an hour's drive into Boma-city. From there, she will perform a ritual flash passage at the nearby port of Matadi. The camera turns to visit this historic port, part of all river transactions in the DRC. From this point, the canoe is disassembled again, stowed in the truck towards Kinshasa 444 km, to the town of Gombe, administrative center of the colonial era to the present day. The canoe is mounted, the crates are placed. The camera is spinning. The performance is to move the canoe to the National Museum of Fine Arts, host structure, through the symbolic streets of colonial powers. Arrival at the Museum, a time of restoration, rituals, dances. The performance is opening the boxes, removing the pieces and installing them in the Museum, or returning them to the people, to restore their status as traditional objects of everyday life. To recount the project, the action, the journey, to collect the intentions of the population, the impressions on this idea of ​​the return. The camera cuts. It's the end of the shoot. Assembly table, preparation of the restitution, large exhibition composed of the film, small films, photographs of the journey, sound recordings, objects, performances, texts ... Discussions ...