Thank you for supporting "Arachnées", a dance-theater play, for our upcoming performances at the Avignon "Off" Festival this summer. 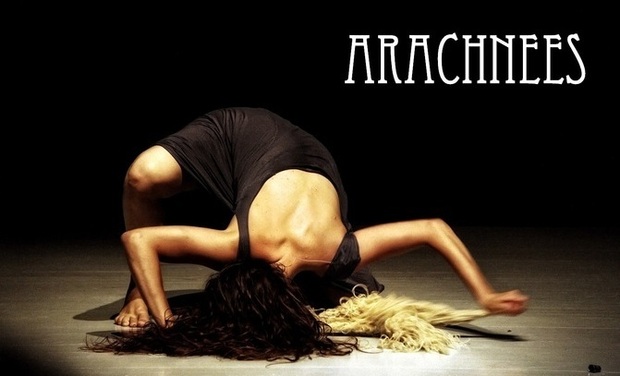 A dance-theater play for two interpreters

After having been presented in Paris and in Athens during 2013-2014, « Arachnées » will be performed at the Avignon "Off" Festival (Chapelle de l' Oratoire) from 15th to 27th of July.

Argument of the play

narrow place away from light and life and condemned to spin for the eternity. Discontented and exhausted, they painfully try once more to go back to work; however, a window – a way-out? – opened, perhaps, towards an infinite still unknown, is imposed progressively at their eyes and grows into their soul…

"Arachnées" results from the desire to transpose the themes and the atmosphere, which are present in the symbolist theater of Maurice Maeterlinck (Belgian poet and dramatist), in a more accessible way that borrows elements from the dance theater. Having as background a revisited myth – the one of Arachne, the Spider Woman-weaver–, the story is unwinded while some of the themes that were dear to Maeterlinck emerge; among them the enclosure, the waiting, the horrific and impassable threshold or even the inevitability of fate and the indefinite anxiety hanging over the characters. "Arachnées" invites the spectator of the XXI century to dive into a strange world of uncertain times, and observe as through a keyhole, secret and isolated creatures, almost unreal, helpless and tragic, sometimes funny and awkward, between human and insect, without being able to reach them.

The amount collected will be used to fund our participation to the Avignon Festival in 2014.

Here's how the collected money will be spent:

-400 euros for all the communication material (posters, flyers, programmes)

-300 euros for the transport of the company (Paris-Avignon)

If the amount collected at the end, exceeds our goal, we will use the supplement to provide us with equipment (such as a dance floor, the sound system which is not included in the rental, additional lights ...) and everything else needed in order to embellish the performance.

A thimble of the performance and a public thank you on our internet pages.

An invitation to "Arachnées" in Avignon this summer or any subsequent performance in France or abroad, a thimble and a public thank you to our web pages.

A double invitation to "Arachnées" in Avignon this summer or any subsequent performance in France or abroad, a poster accompanied by a little note, a thimble and a public thank you to our internet pages.

A CD with the music of the performance, a double invitation to "Arachnées" in Avignon this summer or any subsequent performance in France or abroad, a poster accompanied by a little note, a thimble and a public thank you to our internet pages.

A thank you on our posters, programs and internet pages, a DVD of the performance, a CD with its music and a poster, accompanied by a note, a double invitation for "Arachnées" in Avignon this summer or any subsequent performance in France or abroad, and the famous thimble.