Give your support to an open source educational software controlling an open-hardware (3dprinted) robotic arm. 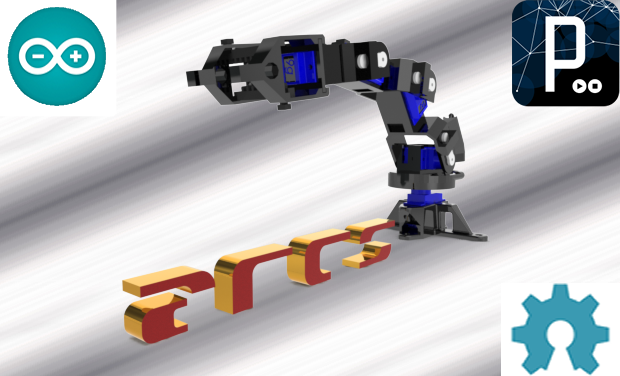 Everything starts from an open-source project found on the net that included a printable robotic arm and a basic firmware (program of the hardware) for Arduino boards. after the building of this still young project I find an interesting base and realize the huge potential of it:

the use at this stage is to send commands lines via serial containing the positions of the robot.it  is very basic and tedious if we do it manually!

Here is where the ARCS adventure starts, I wanted to create a program with a user interface to control and program the robot from my pc. Thus we can now move this robot by moving sliders on the screen (or joystick, gamepad ...) memorize the position of the robot in a file, and thus create "sequences" or "events" which are transmitted to the robot firmware to execute them. The files created by ARCS can even be reused in arduino code to play a particular sequence based on a particular event, the .arcs file simply being a text file containing the positions to achieve line by line.

I would like to "free" ARCS as my contribution for everyone to use it and discover robotics by the fun way.

Current specifications of the ARCS software:

-written with Processing, easily modifiable for beginner in programming

-configurator tool integrated to assign the axes of any controller or joystick to controls the robot. (in none  or all mode with threshold value)

-simulation mode. (with installation of an optional virtual serial port)

-Firmware with improved management of the traveling speed, movements optimization ...

-what you make it!

Presentation of the Mk1 robot by my biggest supporter, Angie, 5 years:

-Anything that is printed in 3D will be produced by me, in France, as well as packing and shipping. I optimized the print time of a complete kit at all levels from the CAD file,  slicing , to the printer itself that is ready for large series! and the whole with no concessions for good quality parts.

I have developed a manufacturing strategy on demand (what lends itself well with 3dPrint!) Wich venture to manufacture up to 5,000 kits in 4 months. (And even the calculation is reasonable!)I will put additional amount of printers depending on the demand. These printers can be won by lottery at the end of the campaign between contributors as explained in the printer challenge.

-For The electronics, I have a special relationship with a supplier with whose I already worked with.

-Timeline: The longest part is the production by 3dPrinting, but the timing is under control: from the minimum goal reached even if the campaign is not over production can begin on a machine, and I can assemble the second printer that will come as reinforcements and will be to win by lottery.

oo A big thank you!

and your name in the ARCS software

printed in PLA, show your support!

WARNING: Delivery only in metropolitan France.

I will equip myself at least an additional 3d printer if the campaign is funded, and based on the number of kits to make at the end. At least one printer to win by drawing of lots among the contributors to 9 € (or one for the number of contributors chances to win !!!) draw at the end of the funding period, delivery after the production of kits, the Printer (I3 custom) will have printed many Mk1 kits, nothing to be worry about the wear, just prowling mechanics! it will be reviewed and ready for use.

it is the actual size mk1 robot mounted on a hollow pedestal (To ballast) can be articulated as the real one!

the kit of plastic parts only, for those who already have servomotors and Arduinos available.

Here is the complete print of a Mk1 kit:

This is a kit to assemble yourself with detailed assembly and installation instructions. It includes everything you need except an additional power supply (6 to 12V) which is readily available anywhere (universal wall transformer or battery... at your convenience and preferably re-used! ) the robot used in the videos is powered by a small transformer of 7.5v 1.5A.

-The original designs used in the construction of the kit are available at Thingiverse: thing 34829

They have been improved and revised, and I will publish all current files simultaneously with ARCS. PLA is the first choice material for this robot, it is much more rigid than ABS, lighter, and will be just as durable as that keeps dry! (Humidity is his only enemy)

The kit of parts comprises a pinion and rack clamp replacement and a special clamp allowing to accommodate a micro-switch in order to achieve a taken sensor.

-tutorials are in preparation for further and improve of the basic kit, concerning actuators, installing a Bluetooth module, taken sensor ... etc ...

The ideal kit for popular teachers! Everyone can have his robot to assemble and program, courses on electronics, microcontrollers, programming, modeling and impression3d can emerge. This pack contains a total of 11 complete kits + 10 servos in Arduino and 2 extra pieces to compensate for any possible mishandling with confidence. Shipping included for France, add 5 € for neighboring countries, € 10 for the rest of the world.

The perfect kit for popular teachers! Everyone can have his robot to assemble and program, courses on electronics, microcontrollers, programming, modeling and impression3d can emerge. This pack contains a total of 24 complete kits + 20 servos in Arduino and 4 extra parts to compensate for any possible mishandling with confidence. Shipping included for France, add 5 € for neighboring countries, € 10 for the rest of the world.

When goals are achieved collecting small bonus will flow!

€ 15,000 -The chef's surprise! This will affect contributors who have chosen one or more Mk1 kits.

€ 20,000 -Inverse Kinematics! I'll improve arcs for a more advanced robot control allowing it to be positioned in space by absolute coordinates.

€ 40,000 -additional 3dPrinter! to win by lot so chances of winning doubled for participants.

This list is not exhaustive and according to the results of the campaign I will add other bonuses as well.

This project is an opportunity for me to convert me professionally by doing something that I love and serve others, I like to create things and I'd like to do it with more freedom while earning my life, ARCS is a first step in this direction, if this concept works I will be able to continue to develop techno-DIY projects and to fund the same way by offering the community to "buy" them by obtaining rewards related to the projects. I would also like to set up a website that would be a bank of free and quality DIY projects , this website could include a small shop selling complementary products in connection with the proposed projects.

The money raised during this campaign is distributed as follows:

This example is from the mk1 robot, all rewards prices  were established on the same basis in%. (Excluding non-physical rewards) so once ls rewards manufacturing costs and KissKissBankBank paid will remain the ARCS contribution, which includes compensation for your servant for initial development (Level 1 - Arcs is open source--). Beyond level1 the money will be reinvested to create the legal structure and buy basic equipment, eventually pay independent developers as needed to create new, more qualitative projects. this part depending of the final amount collected, it is too early at the time theses lines are written to be able to justify future use to the nearest euro,

however I pledge to keep all my contributors up to date of what the collected money will be used for, and that in all cases it will benefit to the open-source DIY community.

---A BIG Thank you!!!!-- -your name in ARCS (if you wish it) -You support the developpement of an open-source project that will benefit to all the community.

--Supporter kit-- -same rewards as upper. + The ARCS keyring and the official contributor plate. all printed by me. The keyring can be black, translucent, or bronze. The official contributeur plate will always be bronze (like the picture) Include shipping for metropolitan France. Add 6€ for international.

--Printer Challenge-- Reserved for people who can provide a shipping address in metropolitan France. A chance to win a 3dPrinter which will produce arcs rewards. this reward don't include the upper ones. the printer will not be the one in the picture! but it will have heated bed and lcd screen as well.

*Early bird* --3dPrinted parts Kit -- for building the Mk1 robot. You'll be able to download ARCS, in which you contribute too, to complete this kit you'll need 5 servomotors 9G, a 5 ou 6v powersupply, and an arduino compatible board(the one you most like). Include shipping for metropolitan France. Add 5€ for side countries and 10€ for international.

--3dPrinted parts Kit -- for building the Mk1 robot. You'll be able to download ARCS, in which you contribute too, to complete this kit you'll need 5 servomotors 9G, a 5 ou 6v powersupply, and an arduino compatible board(the one you most like). Shipping included for France, add 5 € for neighboring countries, € 10 for the rest of the world.

--Trophy kit-- It'll be a good paperweight or ornament on your desk if you like the object but don't want to use it! the base is hollow to be filled with weight. you'll be able to pose it the way you like and simply glue the axes, Shipping included for France, add 5 € for neighboring countries, € 10 for the rest of the world.

*Early Bird* --The Mk1 kit-- Shipping included for France, add 5 € for neighboring countries, € 10 for the rest of the world.

--Robot Arm MK1 kit-- The complete kit for using a robot arm as scalable in hardware and software, you have a complete kit including: the kit printed parts, actuators, a compatible arduino board of generic brand and a shield to connect servos. Installation and operation detail, the ARCS software is optimized for this kit. Shipping included for France, add 5 € for neighboring countries, € 10 for the rest of the world.

--2 Robots on a common electronic .-- Enough to have one on each side of a keyboard or make lazer sword fighting, a third intelligent hand ... I let you figure out even more crazy stuff to do with it! Shipping included for France, add 5 € for neighboring countries, € 10 for the rest of the world.

--2 Robots Mk1-- The twins, this reward includes two complete Mk1 kits. Ideal for a successful fathers day! or not to make some jealous if you have several techies at home! Shipping included for France, add 5 € for neighboring countries, € 10 for the rest of the world.

-- Education kit 11 + - the ideal kit for popular teachers! Everyone can have his robot to assemble and program, courses on electronics, microcontrollers, programming, modeling and 3dprinting can emerge. This pack contains a total of 11 complete kits + 10 servos and 2 arduinos of extra pieces to compensate for any possible mishandling with confidence. Shipping included for France, add 5 € for neighboring countries, € 10 for the rest of the world.

--Education kit 24+-- the ideal kit for popular teachers! Everyone can have his robot to assemble and program, courses on electronics, micro-controllers, programming, modeling and 3dprinting can emerge. This pack contains a total of 24 complete kits + 20 servos and 4 arduinos of extra pieces to compensate for any possible mishandling with confidence. Shipping included for France, add 5 € for neighboring countries, € 10 for the rest of the world.