Athens Artlife - Later is too late - A journey into the Greek soul of 2017 through his artistic scene. 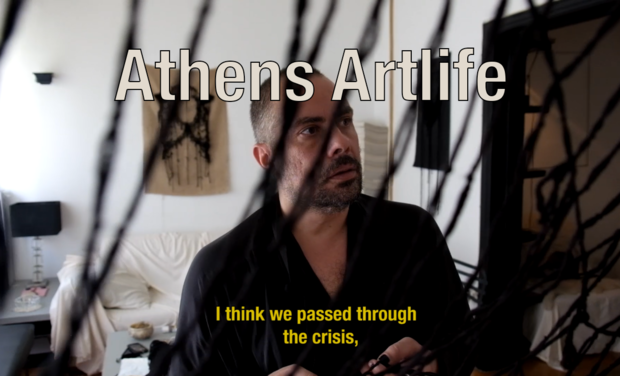 The 2000's have been to Greece what the 60's were to Northwestern Europe. An era defined by strong growth & debt-financed consumption. Unsustainable. Doom to fail. We've all read that Greece suffered a huge blow from the economic crisis. But did you know that Athens is also very much alive? With very little money, art and culture flourished in the capital. So much so that it attracted many artists from around the world, spawning a creative exodus in the country.

This dynamic was noticed by the artistic community and brought forth in the  fourteenth edition of one of the world's most ambitious contemporary art exhibitions: documenta. In 2017, for the first time in its history, the German quinquennial was split between Germany and Greece, between Kassel its main location, and Athens.

Over the course of 4 months, from exhibitions and events to encounters and friendships, we have permeated Athens' artistic ecosystem to see this shift in dynamics and surge of creative energy. How to explain this dynamic? By understanding its causes.

From the social, political, economical, cultural and historical standpoints, this immersion has given us a certain picture of ​​Greece's soul and identity. This creative effervescence cannot be understood without understanding Greece first.

Athens Artlife is a journey into the Greek soul of 2017 through its artistic scene.

A chance, an evening, an encounter, a woman. Ingeborg Beugel. Dutch journalist, war reporter, a cigarette in one hand, glass of wine in the other, we discuss. A family friend, she tells us about Greece, the new life of Athens, the art scene, the influx of international artists, documenta.

She has some perspective. She's been living in Greece for 30 years.  She was married to the right-hand man of singer, actress and former Greek minister of culture Melina Mercouri. She knows the Athenian art scene. She is fascinating, we love her, she invites us to Athens to see for ourselves.

Fascinated by the thought that "less money means more art" we start our research. The New York Times, the BBC, the Guardian, le Monde, they all write about Athens and its new dynamics in arts and culture at large. Searching for a documentary on the subject, we cannot find one. The idea of ​making our own emerges. After 2 months of research, prep and the launch of the non-profit Odyssée Production, we fly to Athens in April 2017.

Life, energy, wisdom and beauty can arise from the worst moment of crisis, doubt and hardship. Athens Artlife is a journey into the contemporary Greek soul through its artistic scene in Spring and Summer of 2017.

Athens Artlife aims at exposing the links between the thriving local art scene and the unshakeable Greek identity through and in spite of national challenges.

Director, scriptwriter, journalist/interviewer, 1st camera, copy-writer & AD for communication, and directed the editing of the trailer.

He dreams of being creative, he is passionate about everything defined as artistic or cultural, except "performances" (he is not sufficiently educated to grasp their depth) and Greek Rebetiko (quite sadly).

He is passionate about journalism, politics and contemporary history. He wants to work in the cultural field at European and international level (UN, EU, NGO...). He's fascinated by Greece and the Mediterranée.

Crazy superstar Dutch journalist & documentarist, Inge has been supervising our project. She actively helped in setting up the frame of our research as well as developing an angle.

Greek director, cinematographer and film editor based between Athens and Edinburgh. Crazy Isi taught us the basics of cinematography and was our second camera for the interviews.

Al. Ma., photographer, cinematographer and film editor based in Athens. She edited the trailer under Arthur's direction. Her work here: http://masmanidialexandra.tumblr.com

Panos Charalambous – Dean (doyen) of Athens school of fine Arts, documenta exhibited artist. He has been an art guide and our link with documenta 14. His profile: http://www.documenta14.de/en/artists/13576/panos-charalambous

Vince Vanden Bogaard – Artist's Agent based in Brussels, he has helped in the early stage in contextualizing our idea within the art world. His Instagram: viince_vb /// Little Big Art - https://www.instagram.com/viince_vb/

Louise Malfait – Public Relation for “Affordable Art Fair Brussels”, she came to Athens in the early stage of the project and kick started our communication on social media. Her profile here: https://affordableartfair.com/fairs/brussels

Morgan le Grelle - Sound Engineer, he is in charge of the documentary soundtrack. His work: http://www.imdb.com/name/nm7915099/

Constantin Didisheim - Old friend that we wanted as the camera there. We pitched him the idea at the very beginning and he quite liked it. This has been an important driver over the entire project. His work: https://vimeo.com/constantindidisheim

Arnaud de Ghellinck “Be Bison” – Film composer, he will help for the soundtrack of the documentary. His work: https://bebison.com/

Arnaud de Kerchove - Diplomat and second at the Greek Belgian embassy, he helped us understand the social, political and economic Greek environment. http://greece.diplomatie.belgium.be/fr

This is THE END
beautiful friends...

In advance, our stupid mustachioed smile to thank your valuable help and support <3

This crowdfunding's only goal is to ensure that all the depth and beauty of this project can be highlighted and brought into focus in the editing stage so that this film can have the best chances of being recognized at its fair value, promoted widely and shown at festivals.

As all the footages have already been shot, the funds raised will go towards the costs of post-production (camera, editing, calibration), the cost of equipment (cameras, feet, lighting, microphones rented on site), to pay the various Greek aids (cameraman, film editors) and finally, for promotion and its festivals fees (registration costs).

Thanks for your implication, we will be able to get this film out there. You are an integral part of the project. Thanks thanks thanks!

1 ticket for the Premier Screening in ATHENS (Cinema Riviera Exarcheia)

1 B&W Tote Bag designed by artist Cacao Rocks (numbered and signed). His work: https://www.artsy.net/artist/cacao-rocks + 1 ticket for the Premier in Brussels or Athens + a private link to see the documentary online

1 Coloured Tote Bag designed by artist Cacao Rocks (numbered and signed). His work: https://www.artsy.net/artist/cacao-rocks + 1 ticket for the Premier in Brussels or Athens + a private link to see the documentary online

Unique Art Piece: "Necklace & Hanger" designed by artist Blind Adam. His work: http://blindadamvision.com/ + 1 love letter written by him + 2 tickets for the Premier in Brussels or Athens + your name in the credits of the film (generic at the end) + a private link to see the documentary online

Exclusive pack "Mécène". Your name credited at the beginning "This film was made possible thanks to ..." + 6 tickets for the Premier in Brussels or Athens + 6 tote bags + 6 t-shirts + 1 personalized thank you card + a private link to see the documentary online