Thanks for your support! With your help we aim to reach a funding of 150%!! 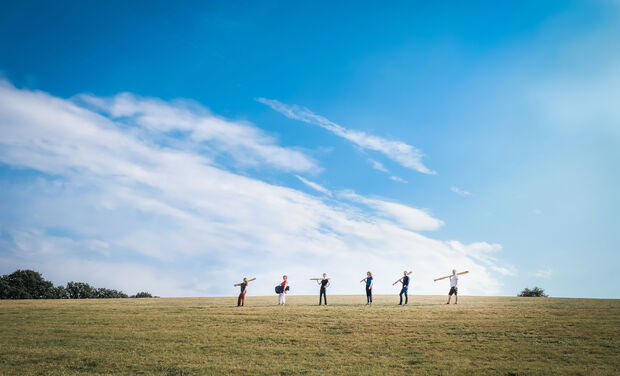 On the border between the Renaissance and the Baroque, Alfonso Ferrabosco the Younger created an inner world full of noble thoughts and tranquil emotions with his Consort Music. Far away from the tangible world, sad and comforting, dark and healing… No wonder Ferrabosco's close friend and poet Ben Johnson described his music as "The Soule of Heaven".A new CD of B-Five, featuring Sofie Vanden Eynde, lute

With this new CD-project the recorder players of B-Five deepen their love for English Consort Music. The centerpiece of this album is Ferrabosco's collection of breathtaking pavanes and enchanting almains. With their warmly sounding Renaissance flutes B-Five captures this rarely heard and to great extent never recorded music. B-Five's agile ensemble play and their characteristic organic sound let Ferrabosco's music dance at the intersection point between frivolous hunger for life and thoughtful resignation.
Lute player Sofie Vanden Eynde joins B-Five and draws a golden rim around this programme with the whispering of her strings. On this CD she also performs some exquisite solopieces for lute by Ferrabosco's father: Alfonso Ferrabosco the Elder.
The cd-booklet will feature a literary short story by Belgian author Annemarie Peeters on the intriguing questions that frame the personal lives of father and son Ferrabosco.The unique story of B-Five...

Barcelona, 2003. Five recorder students almost blow their teacher away. "This sounds so good," he says, "you have to keep playing together." That’s what they do. Hailing from four different countries, they continue to visit each other after their studies. They buy an insanely beautiful set of Renaissance instruments, they mould their sound, they start looking and keep looking. For the best in their flutes, from large bass to soprano: a wonderful conversation between like-minded spirits.
Today, more than fifteen years later, B-Five has become one of the best recorder ensembles in the world. Their organic harmony, their superior craftsmanship, but especially their intense musicality, convince the press and public everywhere.

"B-Five plays with verve, imagination and a wealth of seemingly improvised ornamentation... I was amazed and delighted again and again with the wonderful wealth of textures and moods B-Five's players made with their instruments." (International Record Review)

"One of the best recorder CDs of the last ten years!"
(Klassik Heute on B-Five's album 'In search of Dowland')

Support us with the release of this new CD!

The recording of 'The Soule of Heaven' took place in August 2020 in the beautiful church of Basse-Bodeux in the Belgian Ardennes. An inspiring place where we also recorded our last three CDs and now feel very much at home. The costs of travels and accomodation we have already financed ourselves. However in tough cultural times like these... we hope to count on your support!
With a budget of 3000€ we are able to publish the CD with our partners of the German label Coviello Classics. The time of release will be around summer 2021.
By preordering this new release or buying our already published CDs you will help us reaching this goal! Markus Bartholomé (Germany) - Mina Voet (Belgium/Germany) - Thomas List (Austria) - Katelijne Lanneau (Belgium) - Sofie Vanden Eynde (Belgium) - Silja-Maaria Schütt (Switzerland)

CD "The Soule of Heaven"

Producing this record would not be possible without your support! Therefore, if you contribute 25€ or more, we are happy to send you a signed copy as soon as the CD is released.

Life is full of surprises! When you contribute 10€ or more, you support the release of our CD and you will receive an exclusive, unpublished MP3-track of B-Five.

What is better than one CD?

One for you and one for your best friend? If you support us with 45€ or more, we will send you two signed copies of the Ferrabosco CD as soon as it will be published...

Christmas is coming for sure! Maybe you are still searching for the perfect gifts for your loved ones. The Ferrabosco-album won't make it in time. But don't panic! B-Five already released three other albums with Coviello Classics: Geld Macht Musik, In Search of Dowland and William Byrd Consort Music and Songs. With this package you choose 2 of these albums to be send to you asap! And of course you will also get your signed copy of 'The Soule of Heaven' as soon as it is released.

When you contribute 75€ or more, a B-Five member of your choice will provide an online lesson tailored to the level and interests of the participants. And of course you will receive a signed copy of the CD as well!

If you donate 100€ or more to our project, you will be mentioned as a supporter in the booklet of the CD - and get a signed copy, of course!

We play a concert just for you and your friends! - in addition to sending you 5 CDs, we'll come and play a house concert where you can enjoy Ferrabosco's music to the fullest! (additional travelling expenses may apply - please contact us for an estimate)