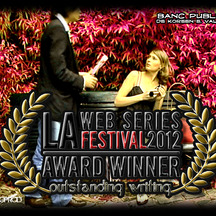 "Chronicles of a public bench, silent guard of anecdotes left daily to its discretion."

A clumsy seducer versus a fiery italian girl, a hysterical feminist facing a pragmatic caribean guy, a boy listening amusedly an eloquent but depressive man, an unsuccessful date or the absurd parody of a Brassens song... After the first season, BANC PUBLIC is coming back with new characters : which one will be your favourite ? And of course, the one who makes everything happen : the public bench...

BANC PUBLIC is a free-broadcasted webserie, aiming at appearing on a national television channel, after Martinique Première (French regional TV channel) : who knows?

BANC PUBLIC's first season has been honoured and awarded by cinema and web professionnals:

Awards give us wonderful reasons and motivation to pursue, but they're not funds... so we need your support to make it happen!

- A young motivated crew : DOUBLE PIGEON and a dynamic (and voluntary!) production team : TICOPROD, working with the author and film director Koreen Valard

An old school gangster who teach the business to his stupid nephew, a father who tries desperately to find a regular baby-sitter, a weird wedding anniversary or the epic meeting of a business man and homeless persons.... And a lot more of characters et surprises !!

Collected funds will cover a part of the costs to make the 10 episodes of the season: one week shooting, the editing and some publicity material for the webserie.

Thanks to all voluntary actors and crew giving their talent and sharing their equipment to complete the budget !!!

Your support to BANC PUBLIC season 2 is a precious help to raise more funds for the broadcasting and the promotion of the serie... on the web and more!

The collected funds will be used as this:

3000 euros for the shooting among wich:

- 400 euros for the set management and for at least a hot meal for the team !

- 200 euros for the actors and crew transportations

1500 euros for the editing and the post-production

A THANK YOU from the team !!

A poster of PUBLIC BENCH

A poster of PUBLIC BENCH, a DVD of season 2

A poster of PUBLIC BENCH, a DVD of season 2, your name in the "thanks" credits of season 2

Previous rewards + an invitation to the preview showing of season 2

You are sponsoring an episode! Previous rewards + your name in the "thanks" credits of the episode and a dinner with the team

You are a super-sponsor!!! Previous rewards + BANC PUBLIC Saison 2 clapperboard !!!