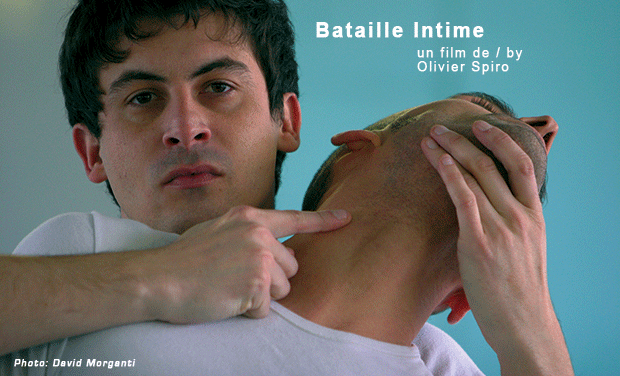 At night, on a rural road, a man escapes by car. He hides in an isolated house near the forest. Soon he’ll discover that the threat he tries to run away is just there in the dark and waits for his confessions.

Bataille intime (The intimate battle) is a story of encounters. Everything started with Roland Topor and Jean Michel Ribes. Two important figures of drama worked together on the writing of five hilarious and biting sketches. One of these stories “bataille intime” inspires two friends Sylvain Groud and Bruno Bayeux creating a choreographical theatre piece where two men tear apart under the light of a microscope. After I saw the stage work it was my turn to recreate a film adapting this piece, with these two men united by the same movement and the same secret.

My first preoccupation was how to integrate the dance into the storytelling and I asked myself how come that this two fighting men dance in an isolated house?

Following this fine thread I got to more stakes, new doors opened to new aspects of this story. Are our main figures brothers, fugitive gangsters, lovers or two ghosts confronted at the edge of reality? This intentional indecision also nourishes the mystery of their meeting and allows the movie to navigate on the borders of genres.

This project got possible for the encounter with a place. The screenplay was only a draft when I told a friend about the ideal location of the story. I dreamt of huge empty rooms, of a house, an isolated hideout lost somewhere in the countryside. She smiled, she knows a place like that: the Domain La Tache, a 200-year-old family house isolated in the countryside of Charente. This house and his surrounding nature influenced the writing of the script presenting him his colours and his lights.

Your support will help us to pay preparations and the expected shooting from 21th March to 27 March 2014.

Each team member is very enthusiastic and participates as a voluntary to this project.

Most of the materials like the camera Red Scarlett, a MoVi 10, sound material, editing material for video and sound and other are freely provided by the non-profit organization DumSpiro, by the director or other team members.

However, we need to rent lighting material, accessories for the camera, install an electricity meter, pay the heating, transports, accomodations, meals and remaining prost-productionfees.

Rent of lighting material and accessories of the camera RED : 4118€

Transports of the team and the material: 1540€

And not to forget the 8% for the participation at KissKissBankBank: 837€

If we manage, with your help, to pass the sum of the vital minimum, we would invest the money in a DCP (a collection of digital files used to store and convey Digital Cinema audio, image, and data streams) and a symbolic rent for the marvellous location Domain La Tache!