Bisiad, the harp in tune with the times. Help us finance our first album! 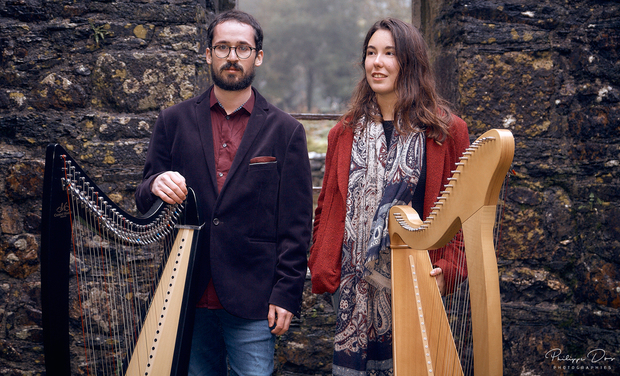 Bisiad is two harpists and singers from the young generation of Breton musicians. It was in Brest in 2016 that Morgane and Kevin wove their bond, reinforced by the continuation of their work in Rennes. Through arrangements and compositions, they together shape a repertoire of traditional Breton, Irish and Scottish tunes. A dynamic and warm music, definitely from today, based on the rhythmic techniques of the two harpists. Instrumentals and songs, dances and melodies crackle there. The texts tell in Breton, French and English.

Young arrivals on the Brittany music scene, Morgane and Kevin have already distinguished themselves in different artistic projects. They won, respectively in 2017 and 2019, the first price and the public price of the Camac Trophy at the Interceltic Festival of Lorient.

With your help, Bisiad will be able to record in the studio from April 20 to 25, 2020, with professional equipment.
A period of work will follow on each recording, with our sound engineer, so that you can enjoy quality listening.
There will remain the visual design of the CD and the pressing to present you a beautiful object by the end of June 2020 !!

The entire album scanned in MP3 format. Thank you !

One is good, two is better!

3 physical CDs + 1 autographed poster + your name forever inscribed in the acknowledgments of our booklet.

We come to play at your house or for one of your events. (Travel costs not included. Accommodation to be provided outside of Brittany)