More than a documentary, a visual experience on cultural and political phenomena in Vietnam, through the eyes of Black H'mongs. 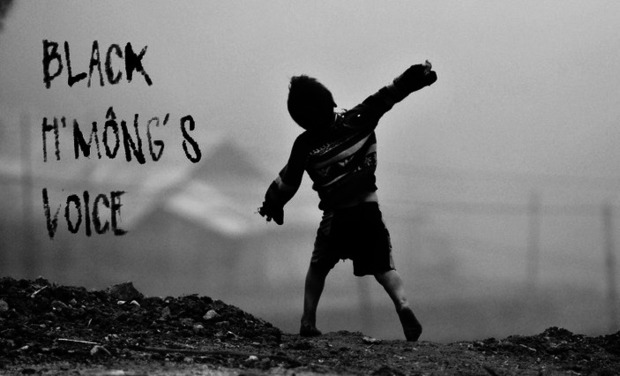 We need to feel free. Free from a system that, since several years, stopped to reflect our humanity, feel from a politic replacing the spirit of an idea with economic power. Free of thinking, free of creating, free of believing.

If you share this need, if you want to look for another way, for a human spot in this automatic system, too “calculated” to leave space to ideas and spirituality, maybe you could share our ideas, maybe you could work with us, giving a little help to this planet to re-establish an order, to wake up a humanity, a system, a society that is becoming more and more grey and flat. We are, maybe, too direct, but limpidity is our dogma.

Black H’mông’s Voice, more then a documentary, is an experiment involving 5 senses.

Through the eyes of Black H’môngs - minority living in northern Vietnam, so named because of the indigo blue dress they wear – we will film the contrast between the south East of Asia, coloured by the oldest traditions of this planet and the neo-colonialist Chinese system.

We will literally immerge for 1 month in the village of Hau Thao, where, through sounds, music, images, we will give voice, in a completely revolutionary way to Black H’môngs, a never-seen documentary, telling stories, lives and traditions of one of the most ancient ethnics of the world.

HOW TO SEE THROUGH THE EYES OF BLACK H’MONGS?

To substitute our view to the Black H’mongs’ one is the only way to launch a message, remaining objective and transparent. Talking through sounds and images, through sensations. The rice terraces of Sa Pa, the buffalos of Hau Thao, the old storytellers’ tales, the echo of the monsoons will give you the possibility to live an extraordinary experience in a breath-taking atmosphere.

Thanks to people met during the previews missions of Studenst for Humanity, our volunteering association ( c.f. www.sforh.it ), we will have the possibility to leave in a very wild village for three weeks, after being passed in Sa Pa and Hanoi. This will allow us to realize our first independent project.

Sharing everyday life with Black H’mongs, we will sleep, eat and work in the rice terraces with them; shooting video, recording sounds in any moment of the day. Our advantage is that we are a 2-people-team going there; used to work together, complementarily. This aspect will give us the possibility to be flexible and ductile. On the road, we will stay in Hanoi for few days, where we have contacts with Hanoi Doc Lab, and we will shoot the contrast between the village and the big city. Also we will have the opportunity to concretely understand what is happening in the streets of Hanoi. We could see and film more about protests against China.

This immersion will be our challenge. We will base our technics of shooting, recording and mixing on works of Ron Fricke, Philip Glass and Goldfrey Reggio (Samsara, Baraka, Qatsi Trilogy, Chronos), with a special attention paid to a visual and contemplative impact that will allow you to live a real sensorial experience.

Forgetting, for a moment, our goal of launching a message, it’s vital to understand that this is not our project. It’s everyone’s project, this is your project. This reality involves everybody, active or passive actors of the same reality.             In a sick society, that divides one from another, the boards are the real limits. A wall between nations, languages, laws, colors. The foreigner is the enemy. He is far, different, scaring, dangerous, and boards are protecting us. So we are English, Italians, Vietnamese, French, this is our label, our root, our identification.

Brahman, is a Sanskrit concept representing the union of each living body in the same reality.  This revelation, matrix of the documentary, pushes us to believe in the freedom of destroying these boards that divide us from the Eastern Asia. This risk to become an homologation process, after the OGMs, the Human Being. And the minorities like Black H’mongs are literally destroyed. In this queue, waiting for we-don’t-know-which orgasmic Holy Graal, where have ideas gone? What about an ideology? What about images, moments, lives? What about history, the pure untouchable teacher? What about the freedom to create?

The creativity, the moral, where is the human potential? Too often merely thrown away. A potential, brains burning to grow the fire of the slow, flattening economic and capitalistic process.

“Everyone who follows, in the world, should give his hand to the “other”,

In the night I scream, going mad. Next one, next one…

And as soon as I calm down I can’t help saying, Is more humiliating to be followed than to follow.”

WHY WE NEED YOUR HELP? We believe that images and sounds need quality, because they are our actors! They need a sensational quality. And quality means expensive equipment. Cameras, lenses, microphones, are more than necessary for our aim.

We also should to diffuse the message, and the diffusion is not cheap. The promotions, the never-ending researches use to take money and a lot of time.

For this reason we want to say “thank you” for reading us, helping concretely, giving us advices and suggestions. At the end, in case we will get more than necessary, we will concretely help the village, sustaining children’s education in Hau Thao, you will be witness and you will participate to H’Exchange project (cf. http://www.h-exchange.org/page.php?PageID=1 ), sustained by our association.

Young and French, when she was 13 she moved to Canada, traversing the ocean. Grew up with bread, water and Deep Purple. We cannot define her passion, involved in music, cinema, art, photography. The truth is that at 20 she has already created her revolutionary and independent world, mixing music videos and short films projected in Montréal theaters. A free spirit, motivated to change the world, her goal is to change the instruction system. Passionate (and student) of cinema, Ingmar Bergman’s first fan, she says she wants to realize a sequel of Persona!

He moved several times from the city to the alps, to the sea, and finally to Canada, Alessandro is a passionate traveller, he loves everything dealing with images, composition and communication: from photography to cinema, from architecture to art. He decided to live as an itinerant, always changing places discovering worlds and cultures. He discovers the real power of creation making projects for his association Students for Humanity. Jack White’s fan, he grew up in gondoles’ city mixing kafka books to Buddhist meditation. He wants to end his life up on the Kilimanjaro, where he could finally write, and think, in peace.