Blanc, solo by Vania Vaneau, has just been programmed in Mexico. Support this project! 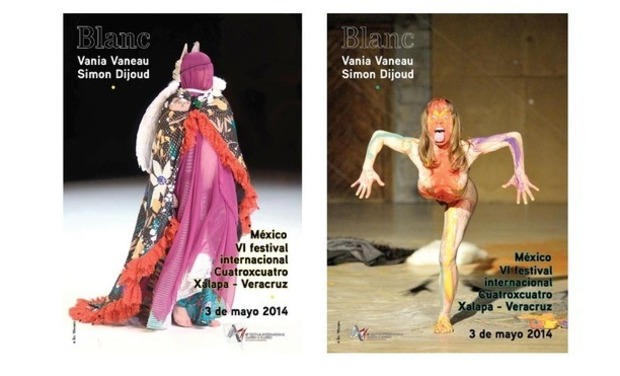 Blanc is a dance solo by Vania Vaneau accompanied by the guitar player Simon Dijoud.

The premiere will be on April 4th at Festival Chaos Danse in Villeurbane, Lyon.

Blanc has been selected to be performed at the VI Festival Internacional CuatroXCuatro de Arte Escenico of Xalapa, Veracruz, Mexico on May 3d 2014. Other shows are being organized in other cities of Mexico.

This project’s aim is to make these performances in Mexico possible.

Blanc is based on a research about rituals, trance and transformation. Seeking to unfold the different layers of the body and spread it in the space like a landscape.

White light contains all the other colors.

The body is considered a filter which is crossed by sensations, emotions, histories and cultures. The individual body is limited, it is used and uses its environment but the same time it has an utopian, multiple and endless dimension.

Shaking intensively the body or changing skins - dressing and undressing it with layers of different materials- it creates multiple and provisory states, figures and meanings.

It is a questions of organs, skin and  breathing but also theater and representation. We travel from the present empathetic relationship to fiction and hallucination.

«  Looking back at my native Brazilian culture, three elements served as basis for the research : the shamanic and afro-Brazilian trance rituals, the work of the tropicalist artist Helio Oiticica and the artistic movement called Anthopofagism which proposed to digest the dominant cultures (European and North American), to mix it with the Brazilian popular culture and create a third element out of that.

It seemed interesting for me to see how these elements could be approached by the point of view of a white, urban, “europeanised” person like me, in the context of a performance, and see how it would get transformed in that process. »

Festival CuatroxCuatro of Xalapa, Veracruz, Mexico, is a collective and independent festival which offers a decentralised context of collaboration and community between artists, producers, administrators and students. It invites national and international creators and proposes a space of exchange through workshops, social projects, talks, street performances, installations and performances.

Since its beginning, the Festival received artists coming from Uruguai, Argentina, Czech Republic, Cuba, Spain, Costa Rica, Japan and Mexico. That made Xalapa one of the most important contemporary performing arts platforms of that region.

In its different activities the Festival received until today 10 000 people.

Festival CuatroxCuatro  as well as the other possible places that hosts us in Mexico will be bearing the costs of the performance, hotel and food for the members of the group but they cannot pay the travel costs from France to Mexico.

The Festival contacted us in December and we’ve tried to find subsidies through public and private institutions in France and in Mexico but unfortunately the answers were negative until now.

Since we have very short time to find that money we’ve decided to make this ‘crowdfundindig’ project and ask  for your participation so we can make this trip.

It is an exceptional opportunity to perform the piece in a country that is culturally connected to our work. It is also the occasion of meeting the Mexican public and programmers from various countries invited by the Festival, to create new connections and opening the possibility of performing the piece in other and places in the world.

The total budget for this project is :

This ‘crowdfunding’ will allow us to cover part of that total cost :

Thank you very much for your participation. We hope to see you on April 4th for Blanc's premiere in France or on May 3d in Mexico at Festival CuatroxCuatro!

your name in the program of the premiere of Blanc at Festival Chaos Danse on April 4th.

1 postcard Blanc-México + your name in the program of the premiere of Blanc in Festival Chaos Danse on April 4th.