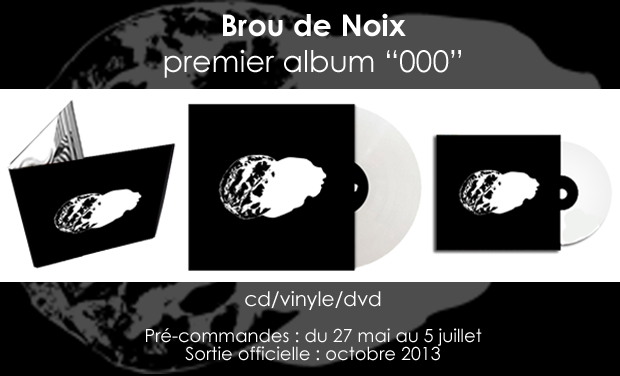 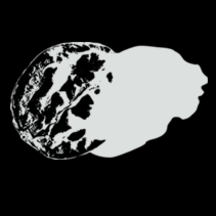 Since September 2012, Brou de Noix has released 16 albums (3 tracks) in digital format, free for 9 months ... This nice pregnancy leads today to the first album, a summary of the first year of work ...

Brou de Noix for all tastes !

While today's musical practices are often nomadic and digital, Brou de Noix wanted to create objects out of this project ... for that matter… beautiful ones.

And as Brou de Noix likes the concepts, rather than one album, you will get almost two: a CD version of 13 tracks that has only 6 tracks in common with the 10-track vinyl edition !

Two different objects for two different musical journeys ... completed by a DVD (3 videos and the whole Brou de Noix discography, 49 tracks in total!) and yet unreleased collages from Flore Kunst and Musta Fior, two artists who met on the internet and decided to follow me in this adventure ...

This is the result of this collaboration that we're offering you today ...

(inside collage by Flore & Musta)

"Flore Kunst performs the art of collage with finesse. Graduated from the École Émile Cohl in 1999, the young designer made her debut in various fields such as linocut, textile design or vector illustrations." She is now no longer as young as in '99 but she's kept her child's soul and drinks ginseng tea to stay punk. She made a collaborative collage with Musta Fior for the CD's inner sleeve. Flore produced 5 original collages for the album release. (Available in A4 Fine Art prints, some in limited edition - the originals will also be available in A5!)

Collagist since 2010, Musta Fior makes collages that are mainly made out of all sorts of papers but sometimes uses the mouse to create digital collages. Always looking for new visual effects, he regularly works on new series. He has met other collagists on the internet and often works with them in various formats. He made in collaboration with Flore Kunst 3D collages inside CD boxes. For Brou de Noix, he collaborated with Flore for the CD's inner sleeve and produced five original collages. (Available in A4 Fine Art prints, some in limited edition - the originals will also be available in A5!)

Videomaker for many of my own projects (Ascalaphe, Lufdbf) Nicotine loves obscure bands, T-shirts with bananas on it. He can't stand frames being aligned on walls and has already made two videos for Brou de Noix‘s "180 "and" 444", which will be available on the DVD. He is currently working on making a short film called "Hell."

Fanny Bruno is a multimedia artist (photography, digital art ...) who likes to mislead and confuse (with her male nickname but also with her pictures). She's always up for a holiday in Brittony and is now working on a video for the EP "3395" that will be available on the DVD.

For those who have experience or a good ear ... Norscq was the leader of "The Grief", an experimental and jubilant French band in the 80’s/90’s...if you don’t have a good ear, don’t bother ... if it's just the lack of experience, go and discover this avant-garde combo (for instance the brilliant "Fycazz on Bananas" who hasn't aged a bit…) and speaking of sound, Jean-Louis has become over time a remarkable and noted "sound engineer": Colder, 2 kilos & More or Von Magnet have entrusted him with the production of their albums and he often completes productions for many labels and artists (mastering for Optical Sound, Born Bad, Grautag, dDamage, lufdbf ...). Norscq likes walking in his underpants with a diving helmet on, is always up for a road-trip in Asia, and because of his origins, he could well bump into Ynfab when she's having a walk in Brittony and... he’s still a great musician as long as he's left in peace :

The fund-raising will help towards the costs of mastering the audio tracks, pressing the CD and vinyl, burning the DVD as well as printing the fine art prints.

The amount requested does not take into account expenses such as packaging and shipping fees (which are included in the price of the packages) and a few other things...

Making beautiful objects has a cost and times are tough for all of us, which is why Brou de Noix will also pitch in! ... Flore, Musta, Nico and Fanny have all volunteered to share their time and talent... and this project wouldn't exist without their participation...

Many thanks to them!

And if you're brimming with enthusiasm and we end up with more than needed, we’ll put it towards improving this project and could offer you some unreleased freebies!

In short, we would do just the same but better!

Here's the link to the French version: