Support BudGE! in bringing the triple bill Budge3 to the Edinburgh Fringe! If you wish to encourage intrepid young dance artists, read on! 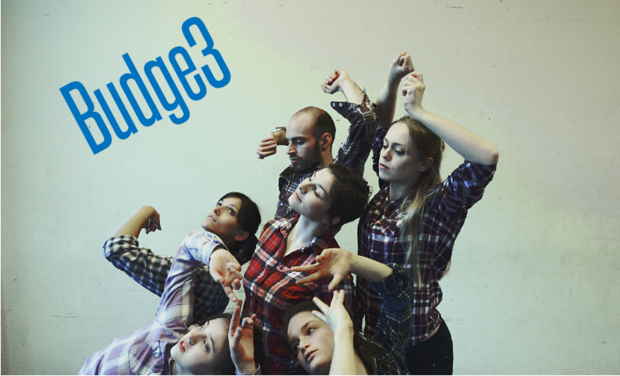 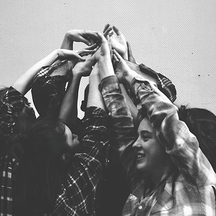 Switzerland’s newest association of independent dance artists is proud to present three original dance pieces created by intrepid young choreographers.  Budge3 is a triple-bill that will be performed from the 7th-15th August as part of the Edinburgh Fringe Festival (Greenside Venues @ Royal Terrace) and we are asking for your help to complete this venture.

The KissKissBankBank will end after the last of our preview showings (9th August)!

The solo Si|Si, choreographed by Pauline Raineri, exposes the restlessness and vulnerability accompanying our interminable quest for fulfillment.  Pauline was inspired by the writings of Elisabeth of Austria during a trip to Vienna, where she discovered a woman constantly seeking for freedom she couldn't find at court.

The trio Harmony in Blues is the result of a collaboration between Sophie Ammann, Rosanne Briens and Erin O’Reilly.

"An enterprisingly cliche-free movement vocabulary where meetings and partings have a country rock feel." Mary Brennan, The Herald (Glasgow, UK)

The duet Hands And, choreographed by Florine Foucault, tells a story, painting a living, open book; a relationship unfolds, much like the dancers’ clasping hands.  It relates the experience of witnessing dance to that of reading a book.  Each person’s imagination yields different imagery, providing an intimate and touching experience to spectators.

BudGE! is an independent dance collective, bringing together the graduates of the Ballet Junior de Genève, one of Europe’s most renowned pre-professional dance companies.  BudGE! provides a professional platform, for emerging dance artists to realize their creative potential.

We are asking for your help to cover the costs of bringing the triple-bill Budge3 to the Edinburgh Fringe Festival.  We are convinced that the Fringe, as the biggest arts festival in the world, will offer us innumerable opportunities to connect with artists from all genres, and to be seen by critics, reviewers and programmers, and individually to develop and refine our craft.  We hope that this festival will offer us new opportunities such as taking the show on tour, give birth to new collaborative efforts with other artists, and to be seen on a larger scale than has been afforded us thus far by the festivals and performance platforms we have been participating in at present.

Unfortunately all of the foundations that we have approached for financial aid have responded negatively because we do not meet their official criteria and we are, as of yet, not sufficiently well-known in Switzerland where we are based, to merit funding for participation in an international festival such as the Fringe.  However we firmly believe that going to the Edinburgh Fringe will be an invaluable opportunity for the growth of BudGE! as a collective and will be the ideal occasion to make an international name for ourselves.  Not to mention that the nine consecutive days that we will perform in Edinburgh create prime circumstances for performing artists such as ourselves to hone our craft in front of an audience.

Young, ambitious, maybe a bit audacious... we are appealing to you to support us in an adventure of utmost importance to our growth as a collective of young, independent dance artists.

With our sincerest appreciation,

The artists of Budge3

** if our funding goal of 4500 euros is reached the surplus will go towards the following :

Cost of liability insurance (required for our venue)

Florine Foucault started dancing at the age of 8. In 2003, she started training in classical dance and entered the Janine Stanlowa school in Paris. Following this, she received a complete artistic education at the Académie Internationale de la Danse in Paris, including theatre, singing and dance, where she obtained the EAT (Technical Aptitude Examinations) in ballet, jazz and contemporary. In 2009, she participated in the performances of Magma and Little Pieces in Paris and Berlin with the cie Bissextile, Stéphane Fratti. In 2010 she started dancing with the Ballet Junior de Genève where she remained for three years. In 2012, she had the opportunity of working on the piece Sideways Rain with Guilherme Botelho’s cie Alias.  She is the founder of BudGE! as well as the choreographer for the Cie 2F, and teaches dance at the MJC du Vaches.

Pauline trained in several schools in Annecy (FR) : CRR d'Annecy, Artys and New Dancer. She also studied at the Virginia School of the Arts (USA). She joined the Ballet Junior of Geneva in 2010 and danced in works by Barak Marshall, Stijn Celis, Cindy Van Acker, Guilherme Botelho, Patrick Delcroix, and Alexander Ekman ...  At the end of her studies, Pauline worked for James Finnemore in London (UK), the Momentum Contemporary in Bern (CH) and John Ross in London (UK). She began working with the Beaver Dam Company in 2013 for the creation of Blue Twig.  During her career, Pauline created the piece "Boa Viagem" for five dancers and one guitarist for the Antigel Festival in Geneva.

Born in Switzerland, Sophie started dancing when she was 3. After achieving her Swiss Baccalaureate, she continued her artistic education at the Tanz Akademie Zürich in 2008. In 2009, Sophie moved to Glasgow to pursue her studies at the Royal Conservatoire of Scotland, where she obtained a BA in Modern Ballet in 2012. Back in Switzerland, Sophie joined the Ballet Junior of Geneva. In 2014 Sophie finished her training at Ballet Junior in order to start her professional journey. She co-founded Junebug Company, which is part of the BudGE! collective. She is also studying for an MA in Cultural Management with Northumbria University, in order to leap into the freelance dance world with body and soul.

Born in California, Erin has studied at several dance schools in the United States, including The Washington School of Ballet (DC), the Gelsey Kirkland Academy of Classical Ballet (NYC), and the San Francisco Conservatory of Dance. She then moved to Geneva where she danced with the Ballet Junior de Genève from 2012-2014. Upon graduating, she was part of the creation of the piece Migratio with Compagnie Laura Tanner, which she performed in Geneva as well as on tour in Venezuela and Ticino. She is also a dancer with Compagnie Beaver Dam and co-founded Junebug Company, which is part of the BudGE! collective.

Born in Coutances in lower Normandie, Rosanne started her dance training at the leisure centre of her city, before continuing her education at the Conservatoire de Rouen in 2009, where she had the opportunity to dance pieces such as La Mort du Cygne by Thierry Malandain on stage.  In 2012, after obtaining her Baccalaureate in Rouen, she joined the Ballet Junior of Geneva, from which she recently graduated. In her last year at the Ballet Junior de Genève she also co-founded Junebug Company, which is part of the BudGE! collective.

Frank Kohler was born 1988 in Ebingen, Germany, and started dancing at the age of 15. In 2006, he trained in jazz dance for a year at the Espace Pléiade in Paris. In 2008, he joined the Mondap’Art school in Nîmes, where he studied contemporary dance for two years. In 2010, he joined the Ballet Junior de Genève, where he danced for two years. In 2012, he obtained a contract with Cie Linga in Lausanne. During that time he performed the pieces Additional Tones and Falling Grace. In 2013, he was hired for the restaging of Folks with the CCN Yuval Pick in Lyon. Most recently, he participated in the creation of Migratio for the Cie Laura Tanner in Geneva, which also went on tour in Venezuela and Ticino.

Antonin Rioche recently culminated his training of 3 years with the Ballet Junior de Genève and is equally impassioned by photography. We are extremely pleased to have him on board as photographer/videographer for BudGE!  For more of his photos see http://www.rioche.fr

Your name will appear in our performance video, which will be filmed at the Fringe + video with short extracts of each piece (downloadable Vimeo link) + preceding reward.

Two personally selected photos of our rehearsal and performance process to send by email + preceding rewards.

1 invitation to our show + preceding rewards.

Live rehearsal viewing and Q&A with the artists. **if you are unable to join us we will arrange a skype at your convenience to see us at work and have a chat + preceding rewards.

**BIG SURPISE VIDEO** (We might, for example, walk the streets of Edinburgh proclaiming YOU ARE A GOD) + preceding rewards.