It rolls for schoolgirls from Mikutukutu. 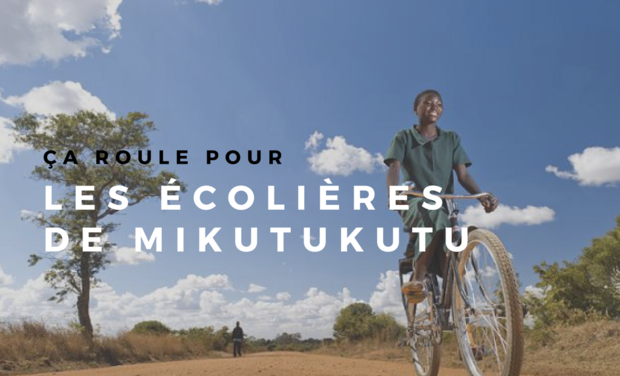 NDAPULA, Zambia, 9 Sept. - Nine kilometers in each direction, rain or shine: this is the
distance that Suzanne Chisulo has to travel every day to get to her school.

Chisulo is one of 120 girls who have had difficulty going to Ndapula Community School.
Many of these girls missed classes at least twice a week.

"You can’t accuse them of living far away," says Amos Muliswa, school coordinator at
Ndapula, pointing to the rolling hills of blue mist in the distance. "That's where Suzanne and other girls come from, in the village of Kapilipili, nine kilometers from here."

Distance was the factor that drove Muliswa and a handful of parents, among them village
chiefs Kachepa, Chikwampu, Chitumbo and Kalimakwenda, to create the school in 2003. The nearest school was 30 km away.

It is estimated that only 20 percent of children, who start primary school in rural Zambia,
eventually complete the final year. The main reason for this situation is the long distances they have to travel to and from school. Girls like Chisulo run the extra risk of being raped while on their way to class.

"Some children walk up to 20 kilometers each day to and from school, spending more than five hours on the road, while they are open to verbal abuse, insults and even physical attacks if they are girls, "Clément Sinyinda, deputy minister of education in Zambia, told IPS. The situation is not peculiar to Zambia, but to all of rural Africa. The impact, especially on girls, of early school drop-outs is serious.

The United Nations Children's Fund (UNICEF) says that girls in the formal education world not only earn higher incomes, but are also more inclined to bring their children to school. immunization, better nutrition and lower maternal and infant mortality rates compared to those who were unable to complete primary education.

The Zambian scholar, Elizabeth Mumba, finds that girls who graduate from higher education have the power to "participate in and benefit fully from the economic and social
development of the nation" in addition to being able to better protect themselves against
HIV / AIDS.

Kazuko Otsu, a visiting scholar from the Hokkaido University of Education in Japan, noted that in Zambia "the long distances between homes and schools, and the lack of adequate sanitation facilities for girls could be the main factors affecting the supply side, and sexual harassment by older boys and teachers seems to be serious in some schools. "

It is to help girls avoid this fate that the Chicago-based non-governmental organization
'World Bicycle Relief' has come to Africa with an initiative that will help more girls finish at
least the fourth grade of the class. formal education.

The Ndapula Community School recently became the first school on the continent to benefit from this program when a shipment of 100 bicycles arrived for distribution - mostly to girls in remote villages. Suzanne Chisulo was among the first beneficiaries.

"Before I got a bike, I woke up at four in the morning so that my friends and I would arrive at school by 7:00 am, the time the classes started. sometimes you could meet bad boys who usually chased us and forced the ones they captured to do bad things, "explained Chisulo, with great embarrassment.

Rita Daka, an orphan who lives with her grandmother in the village of Kapilipili,
acknowledged that before she got a bike, she was usually so exhausted after walking to and from school that she did not want to go back to school the next day.

"With the new bike, I am now able to attend classes regularly," she said. The project started in a promising way. (END / 2009). In Zambia, in rural areas, people are struggling to break out of a survival economy.

The solution: cycling, one of the most efficient and cost-effective ways to make it easier for children to get to school.
But not just any bike. The Buffalo, a specific model created by Frederick Day, founder of the NGO World Bicycle Relief, is assembled in Zambia in the workshops of the association. Capable of carrying 100 kilos of goods, these bicycles are distributed free or sold and financed by micro-credits.

World Bicycle Relief is a Chicago-based, large-scale, non-profit organization that specializes in large-scale bicycle distribution programs to facilitate poverty alleviation and disaster recovery initiatives in developing countries across the globe. the world. Their programs focus primarily on education, economic development, and health care. As of September 2010,

World Bicycle Relief has distributed more than 116,000 bikes in the developing world. In its most important program, Bikes for Empowerment Educational Program, nearly 70 percent of student bikes are designated for female students.

Experiences in Africa (Uganda and Tanzania) and Sri Lanka on hundreds of households have shown that cycling can increase the income of a poor family by up to 35%. In the transport sector, cost-benefit analysis for poverty alleviation in rural areas has yielded one of the best returns in this regard. For example, road investments in India were 3-10 times more efficient than almost all other investments and subsidies in rural economies in the 1990s. What the road does at a macro level to increase transportation, the bike takes in charge at the micro level. Cycling, in this sense, can be one of the best ways to eradicate poverty in poor countries.

World Bicycle Relief configures bicycles specific to the environment in which they will be
distributed. The 2011 WBR bike is nicknamed the Buffalo because of its strength and
durability. The Buffalo WBR features a coaster brake for safety and durability, and weighs 23 kg, including a rear rack and fenders. It can carry a cargo of 100 kilograms. The frame and fork are oversized, 16-gauge steel, and the wheels are 32 and 40 gauge. The bikes are assembled in the WBR facilities. Three projects in Africa: in Harare, Zimbabwe, Lusaka, Zambia, and one in Kisumu, Kenya, to reduce costs, be close to the end user, and ensure local compatibility of parts.

To ensure the continued maintenance of bicycles, Bicycle World Relief has set up a
maintenance training program. WBR organizes training in groups of 5 to 20. In addition, the mechanics are equipped with high quality tools and uniforms. More than 700 mechanics have been trained and equipped to maintain bicycles in their communities in Zambia, Zimbabwe, Kenya and Uganda.

Launched in June 2009, the Bicycle Empowerment Education Program (BIP) is an educational initiative in partnership with the Zambian Ministry of Education, community organizations and several international NGOs. Its goal is to provide 50,000 bicycles to school children and teachers in rural districts in Zambia to improve access to education by reducing travel time. 70% of these bicycles are awarded to students, while 30% are teachers, community leaders and bike mechanics. 70% of the bicycles awarded to students are awarded to girls in recognition of their unique challenges in accessing education. The first reports on the program show an increase in the percentage of children who complete their schooling to 88% in BEEP schools compared to the national average of 60%. Each beneficiary receives basic training on bicycle maintenance and safety, and signs a contract of engagement when receiving his bike.

"Buffalos for Zambia" was the title of our first expedition. We had committed to fund 200
bicycles for schoolgirls. After having set up a small team of faithful rotarian friends, we flew on May 23, 2014 to Lusaka, for a week of unforgettable encounters with the population and schoolgirls of the Zambian countryside to whom we handed our Buffalos, during an incredible day of celebration.

After catching the virus from India, we were hit by that of Africa. Impossible to stop there.
The needs are huge. Our children and ourselves don’t dream anymore. Everything is at hand. Just buy cash or on credit. But in the vast majority of the world, a simple bike is a dream of future, freedom, social status and success. So let's wake up this little bike in our head and let's dream about a better world.
Like these polio vaccines, which have changed the lives of these Indian children, by
avoiding this terrible disease, we will, modestly but proudly, change the lives of these
schoolgirls who will continue to go to school, follow study, train for a trade and become
active and free women.

Zambia, a former British colony, is one of the few African countries to have had no war.
Country stable, located on average at 1000m of altitude, with a pleasant climate, and a
beautiful vegetation.

The 2018 expedition to Zambia is taking shape and moving ahead. The contacts are
formalized and the fever rises gradually. The project consists of the renovation and
extension of a school in the province of Solwezi. The desire, in partnership with Rotary
International, Rotaract, Global Family Action NGO, WBR Bicycle NGO, local authorities and the Zambian Ministry of Education, is to create a pilot school in rural areas. vector of
economic development, mainly for girls.

The construction will take place in May, over 2 weeks in total. The school will be located in the area of Solwezi, Sandang'ombe Mitukutuku. Major works and infrastructure will be well advanced. It will remain volunteers, painting, small masonry, carpentry, assembly of
furniture (Ikea specialists welcome). The inauguration is scheduled for June 1, 2018 as part of a big party. It is this day that we will give back the bikes.

The school has about 700 students, half boys, half girls. The structure already exists, but it is in a bad state. Depending on the level of fundraising, we can consider renovation,
painting, masonry, carpentry, glazing, furniture ..., And of course, the delivery of a maximum of bicycles.
The project will last 2 weeks. From May 22 to June 2, 2018. The official opening of the
school and distribution of bicycles would be scheduled for June 1, as part of a big party.

Initially, we do not believe it, and little by little, thanks to everyone's efforts, this dream will become a reality. I do not propose to do a simple humanitarian action, but to participate in an incredible and unforgettable experience. At a time when people are fleeing their countries, what is more attractive than offering the possibility of being happy in one's own country.