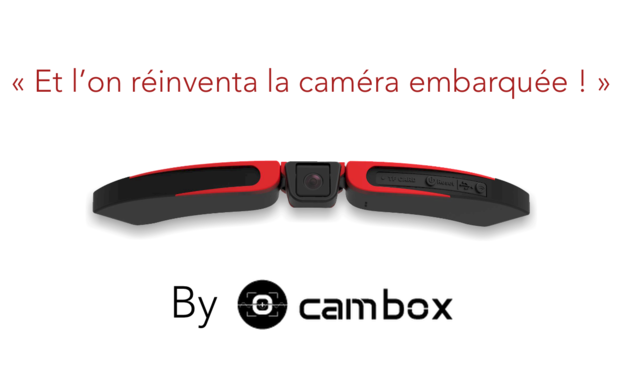 Support the Cambox project by participating in the launch of its new camera : the FullHD Wifi Cambox V3 !

This revolutionary onboard camera will make you forget everything you already knew, with its exclusive fixing concept and positioning, the Cambox allows you to restitute faithfully the user’s vision!

Thanks to your Cambox, you will be able to record your exploits in a more intuitive, immersive way and even more fun all this with an unprecedented safety level !

We are counting on you to accompany us in the launch of our new camera and we invite you to join the numerous fans of our communities!

« And we reinvented the helmet camera ! »

Safety, Positioning, Discretion, Lightness, Simplicity and Design are our Cambox v3 keywords. It weighs only 38 grams, for a length of 168 mm and a thickness of only 12,5 mm. Its curved shape allows to match the rounded shape of the helmet without disturbing the user.

« it will bend to all of your requirements »

allows you to easily and quickly positioned the camera inside any type of helmet or under any type of visor (helmet, cap, hat …).

Its lens, ideally placed in the center and right above your look, allows you to record your real sensations in an ultra-realistic manner !

The pivot-mounted central lens can be mechanically tilted, up to 35°, with the aim of obtaining the ideal viewing angle!

Its negative -5° angle was designed to match several helmets and visors whose support is already tilted down, which allows you filming horizontally!

Despite its size even more compact and a weight similar to the previous version, the new Cambox delivers an unbelievable footage quality thanks to its Sony sensor and delivers a FullHD 1080 resolution.

The 2 implemented HD microphones, placed on each side of the Cambox V3, allow to reproduce an ultra-realistic stereo environment!

«with it, you’ll discover the freedom of going wireless!»

Who has never dreamed of immediately visualized his exploits?

Thanks to the embedded WIFI technology of the Cambox,You can interact at every time by means of your smartphone and of the free app MyCambox.

Simply armed with your smartphone, the MyCambox app, will allow you to control your camera with your fingertips, in order to bring you an unprecedented and unequalled user experience!

Thanks to its revolutionary design, its lightness and its fixation, the Cambox easily fixed everywhere and on all supports!

Cambox Vision is a start-up based in Nantes (France) that designed, manufactured and commercialized an innovating onboard camera which is protected by several international patents.

Initially commercialized within the equestrian sports market, and with more than 6 000 units sold, Cambox Vision now extends its activity to motorsports, extreme sports and other hobbies.

« Our products are our European jobs ! »

Cambox also asserts values with its Made in France product

The adventure began in 2013 with Jean-Marc Piednoir, which is also the designer and the creator of the Cambox. He’s supported in his everyday tasks by a team of young and dynamic professionals.

Cambox is accompanied by BPI France, the Nantes Atlantic Chamber of Commerce and Industry, the Pays de la Loire region, TOTAL Development and the French National Institute of Industrial Property.

We are also collaborating with French subcontractors, the Inovelec group for the conception and the manufacture of our electronic circuit, the Emitech group for the certification of our products and with Alfa Tex Velcro for our fixation system.

All our brands mentioned hereabove are protected and are owned by the Cambox Vision group. The cambox concept is protected by international patents.

What is this collect for?

The different prototypes tested in 2017 have amply demonstrated their efficiency and we are now starting the production and the industrialization steps of the product.

The three main cost items are linked to the manufacture of our electronic components, to the packaging and to the certifications which represent a cost of 40 K€ to be covered.

The Cambox is manufactured and assembled in our facilities and calls on French subcontractors, mainly local.

To launch this product, we do need a minimum of orders to initialize the production phase. This is why we offer you promotional pre-order offers, in order for you to acquire your own Cambox for a very attractive price!

First deliveries will begin mid-April, in order for us to deliver you a finished product with its nice packaging.

Orders will be shipped following the order’s reception date, this mean that the first persons to order will be the first served !

Payment is made by KissKissBankBank and the debit will only be made once the goal is reached. From then on, all the funds will be collected by Cambox Vision SAS.

A BIG THANKS ! As such, your name will remains indelibly etched on our website and on all our social media.

Your name will remains indelibly etched to our website and on all our social media. + The cap of your choice “Cambox Horse” or “Cambox Meca”.