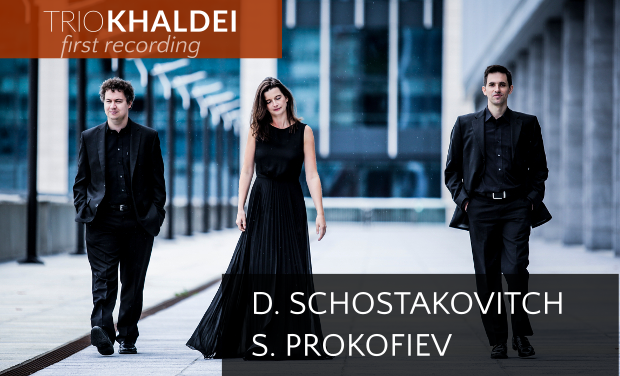 In our five years of existence the trio has performed in some of Belgium’s greatest concert halls, including the Centre for Fine Arts in Brussels, De Bijloke Music Centre in Ghent and the Concertgebouw in Bruges, and the trio is at the top of its game.

Our 2016-17 season is looking good, with performances in the Centre for Fine Arts in Brussels and at the Flanders Festival as well as tours to Slovenia and France. For the moment, though, we’re concentrating our efforts on recording our first CD.

For this CD, we’ve chosen the repertoire that is closest to our hearts. It honours two of our favourite composers, Dmitri Shostakovich and Serge Prokofiev.

Thanks to the generous support of Antwerp’s arts centre deSingel, we have the opportunity to record our CD in their largest performance space, the Blue Hall. The recording will take place from the 12-15 July.

Nicolas Callot, the pianist and sound engineer, will be our artistic and technical director. The CD will be released under the French label Paraty (www.paraty.fr), distributed worldwide by Harmonia Mundi.

The Shostakovich trios have been part of Trio Khaldei’s repertoire since our very first concert.

- Romanticism and youth in Trio No. 1 which was composed during a trip to Crimea

- Sadness and grief in Trio No. 2, a piece written during a horrific time of war and terror. This is an evocative testimony to the memory of Shostakovich’s closest friend, Ivan Sollertinsky.

The trio likes to incorporate changes of atmosphere within its programmes, putting the spotlight on a particular duo or inviting well-known artists (e.g. Liesbeth Devos, Geert Baeckelandt, Jereon Robbrecht) to perform alongside us. Here we’ve chosen two magnificent duos by Sergei Prokofiev, each showcasing the piano and one of the strings of our trio.

- The Ballade for Cello and Piano is one of Prokofiev’s fresh early works combining the composer’s romantic sensitivity to melody with a rousing rhythmical pulse.

- The Five Melodies for Violin and Piano, miniatures filled with humour, take us into an intimate world full of colour and harmony.

Trio Khaldei brings together three strong musical personalities that although very different, fit together giving a result that is much greater than the sum of its parts.

Every concert is a unique experience for the trio, and we tackle every piece with fresh eyes, as if it were the first time it were being played. Our respect for the score encourages us to hear what is beyond the notes. We plan our programmes with care, putting great masterpieces of the trio repertoire alongside lesser-known works.

Barbara Baltussen (b. 1982) comes from a family of musicians. She began learning piano at the age of seven at the Academy of Music of Saint Nicolas under Johan Lybeert. She continued her studies in the Royal Conservatory of Antwerp under Levente Kende and Heidi Henderickx, where she obtained a diploma of ‘mastery of music’ in June 2006.

During the same period, Barbara participated in several masterclasses with musicians of international regard such as Jacob Lateiner, Elisabeth Leonskaja, Lee Kum-Sing, György, Charles Rosen, Udo Reinemann, Jard Van Nes, Rudolf Jansen, Rian De Waal. She was a prizewinner at many competitions including the Jong Tenuto, Cantabile, Axion Classics and E. Durlet competitions.

In a world that offers so many possibilities, Barbara has made the choice not to specialise in one sole domain. Instead, she spreads her musical talents widely, mastering the various facets that the profession offers. Barbara juggles these multiple occupations that constantly intersect and influence each other: in this way she combines teaching with a very busy concert life as soloist, chamber musician and accompanist.

Barbara teaches piano and accompaniment at the Academy of Music of Bornem and at the Musical Humanities in Brussels.

As a soloist she has worked with conductors such as Etienne Siebens, Koen Kessels, Ivo Venkov, Silveer van de Broek, Gert D’haese and Edmond Saverniers. Barbara came up with a solo programme with works by female composers that she has already performed in diverse concert venues and at festivals such as the international piano festival of Quaregnon in 2010. In June 2014, she premiered the first Concerto for Piano and Ensemble by the promising young composer Gillis Sacré, who dedicated the work to her.

Barbara is one of the founding members of the Khaldei Trio and, along with her father Nico Baltussen,

forms an enthusiastic duo. She is much in demand as an accompanist for competitions, conferences and masterclasses and as a coach for various productions. Barbara has already worked with such ensembles and orchestras as the Brussels Philharmonic, the Vlams Radio Koor, Walpurgis, and the Hommages ensemble.

He has participated in master classes with violinists such as Charles-André Linale, Raphael Oleg, Albrecht Breuinger and Renaud Capuçon.

Pieter is also a keen chamber musician. Since specialising in chamber music with the Artemis Quartet at the Queen Elisabeth Music Chapel, he has participated in masterclasses with the Artis Quartet, the Skampa Quartet, Heine Müller, Ralf Gothoni and Andras Keller.

In 2003 he won the international competition “Promotie Vlaamse Muziek en Musicus” at the Orpheus institute in Ghent. With ARIS4 he won the most famous chamber music competition in Flanders, “Gouden Vleugels”.

Since 2006 Pieter has been first violin in Spectra, an ensemble that specialises in contemporary music. He is one of the founding members of the Khaldei Trio and has been a member of the Tana Quartet since May 2014.

Pieter has already played at numerous festivals and concert halls such as: Musica Strasbourg, World Music Days in Sydney, the Traietorie Festival in Parma, the festivals of Aix-en Provence and Avignon, Wigmore Hall in London, the Louvre Auditorium in Paris, the Venice Biennial, the Donostia Festival in San Sebastian, the Ravello Festival in Naples…

Pieter Jansen plays a violin by Marcus Snoeck made in Brussels in 1742.

Francis Mourey started playing the cello at the age of seven in the Conservatoire National de Région in Besançon (France). When he was 12, he progressed to the CNR of Dijon, studying under Laurent Lagarde. There, he completed his training, studying orchestral conducting with Jean-Sébastien Béreau, organ with Jean-Pierre Leguay, composition with Guy Leclercq and music history with Claude Abromont.

At the age of 17 he was awarded the Diplôme d’Études Musicales (formerly the Gold Medal) with highest honours and a year later, the Diplôme de Perfectionnement with distinction.

In 2003, he was the unanimous winner of the Raynaud-Zufluh prize. In 2006, he was awarded the Compte de Kerchkove de Denterghem prize; in 2009 he won first prize in the international Servais competition and the Prix du Patrimoine of the Royal Conservatory of Brussels and in 2010 the Père Sury prize.

As an orchestral musician, Francis Mourey plays regularly with the National Orchestra of Belgium, the Brussels Philharmonic and the Orchestra of the Opera of Liège-Wallonia. He has also appeared as soloist, collaborating with such conductors as Martin Yates, Jean-Sébastien Béreau and Bernard Delire, and performing in venues such as the Royal Conservatory of Brussels, the Concertgebouw in Bruges, the Singel in Antwerp, the Church of the Val-de-Grâce (Paris)… An avid chamber musician, he performs in a duo with pianist Aude Vallée as well as being a member of the Khaldei Trio.

Francis Mourey teaches cello at the Academy of Molenbeek-St-Jean and at the school of humanities and classics, Schola Nova.

He plays a cello by luthier Tanguy Fraval made in 2014.

The funds raised will go towards the recording and production of our CD.

The budget is divided into 3 parts:

The recording location is of prime importance in classical music as this directly influences both the sound and the spirit of the recording. We have the opportunity to record our CD in deSingel in Antwerp, one of the nicest acoustics in Belgium.

The quality of the recording is also of utmost importance. Our sound engineer will attend for the four days of recording as well as three days of editing and two days of mixing and mastering.

The difference between buying an album online and having a real CD is the pleasure of possessing something tangible. This part of the budget will cover the visual element of the CD, from the design of the booklet to the text inside, including the translation into 3 languages (FR, NL, EN) and the image rights…

As well as the CDs sold by Paraty, we are pressing 1000 CDs for our (non profit-making) organisation. These will go to you, the supporters of this project; to concert organisers for the promotion of our trio; and also for sale at our concerts.

We would especially like to thank deSingel and Nicolas Callot without whom this recording would not be possible.

Our sincere thanks go to you, the music lovers, who are supporting us in this great adventure. We are extremely grateful for you backing, and look forward to sharing our passion for music with you at our concerts and through our forthcoming CD!

Your name on our website + a CD signed by the artists

Your name on our website + 2 CDs signed by the artists + 2 tickets to a Trio Khaldei concert of your choice + your name acknowledged in the CD booklet + the possibility of attending one of the recording sessions for our CD + a private concert by KHALDEI XS (violin-cello duo) (within a radius of 100km of Brussels, programme and date to be arranged with the artists)

Your name on our website + 2 CDs signed by the artists + 2 tickets to a Trio Khaldei concert of your choice + your name acknowledged in the CD booklet + the possibility of attending one of the recording sessions for our CD + a private concert by the trio (within a radius of 200km of Brussels, programme and date to be arranged with the artists, decent grand piano present)