A day in Vienna with Hummel's morning spirit, the passionate Brahms and the Transfigured Night of Schönberg. Help us make our CD! 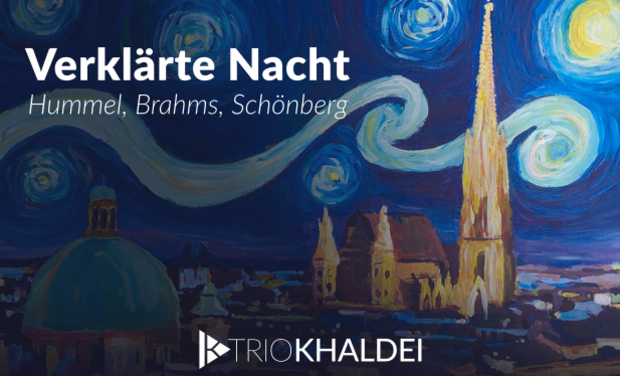 After almost 100 concerts together, the trio is at the top of its game!
The trio has already played in some of Belgium’s greatest concert halls, including BOZAR in Brussels, De Bijloke Music Centre in Ghent, DeSingel in Antwerpen and the Concertgebouw in Bruges. It also had the opportunity to play abroad with concert tours in France, Netherlands, Slovenia, and to record live concerts for Klara (Belgian classical music radio) and ARS (Slovenian music radio).
But one of the most important moments in the trio’s life is still the release of its first CD in March 2017, under the Paraty label.

The coming musical season (2018-2019) should be even more interesting for the trio with two concert tours in Latvia, Lithuania and Estonia; multiple concerts in Belgium, and several other projects that are still in planning. You can  get a taste of what's to come this season by visiting our website.

But for now, we’d like to present you with a project we’ve been developing for a few months: the recording of our second CD.
After a first recording dedicated to Dmitri Shostakovich and Serge Prokofiev, we’re changing the scenery and bringing you to Vienna, the epicentre of three centuries of European music history!

A FEW WORDS ON OUR PROGRAMME________________ _ _
For this recording, Vienna takes centre stage in an eclectic programme that showcases the city through the 19th Century, with three great composers that were born or lived there: Hummel, Brahms and Schönberg.


The program returns to the origins of the piano trio with Johann Nepomuk Hummel, one of the most famous pianist of his time. He studied composition with Haydn’s and was the only student that Mozart would recognize as his own. Hummel’s Trio in F (1799) began the transition between the first Viennese school and Romanticism. The last movement is reminiscent of the famous “Rondo alla Turca”, the finale of Mozart’s Piano Sonata KV 331 inspired by the Turkish military ensembles.

Johannes Brahms is certainly one of the essential composers in the piano trio repertoire. His Trio No. 2 in C, composed in Vienna in the height of Romanticism, boasts endless treasures and Brahms' incomparable talent as a chamber musician makes itself heard. Brahms, usually incredibly self-critical, seems  to have  been  especially  pleased  with this Trio, writing  to his  publisher:  “You  have not yet had such a beautiful trio from me and very likely have not published its equal in the  last ten years.”

Verklärte Nacht (1889), one of Arnold Schönberg's most famous pieces, is often regarded as the last masterpiece of Romanticism. We’ll record this piece, originally written for string sextet, in an arrangement for piano trio by Eduard Steuermann, a pianist and composer who studied with Schönberg.
The piece is based on the poem of the same name by Richard Dehmel. The composer follows the structure and content of the poem in the music. Nature, guilt, forgiveness and redemption are all entwined in Schönberg’s composition.

ABOUT THE RECORDING________________ _ _
Thanks to the generous support of Flagey, we have the opportunity to record our CD in the beautiful Studio 1, which boasts an excellent acoustic for chamber music.
We also have the chance to record on the studio’s new Steinway D. It will be tuned daily by Svetlo Siarov, our pianist’s favourite piano tuner.

The recording will take place from the 15-18 August.
Nicolas Callot, the pianist and sound engineer who helped us in the success of our first recording, will be our artistic and technical director. The CD will be once more released under the French label Paraty and distributed worldwide by Harmonia Mundi.

TRIO KHALDEI________________ _ _
Since its first concert in 2011, Trio Khaldei has developed from a young, promising ensemble to a crowd favourite on Belgium’s biggest stages. In 2013, the trio was one of the six ensembles nominated for the first edition of the Supernova competition. Over the last few years, the trio has performed in many cultural centres throughout the country, in prestigious venues such as Bozar (Brussels), AMUZ (Antwerp), De Bijloke (Ghent) and the Concertgebouw in Bruges, as well as at numerous festivals in Belgium and abroad, including the Ghent Festival of Flanders, Festival 20/21, En Avant Mars, the Spectrum Festival (Slovenia) and the Arsana Festival (Slovenia). The trio has also recorded for Belgian stations Canvas (television) and Klara (radio) and the Slovenian National Radio.

Trio Khaldei has a particular affinity for Russian music from the first half of the 20th Century, especially music by Shostakovich. The trio’s namesake, Evgueni Khaldei, was official photographer of the Stalin regime, and created striking portraits of all the great Russian artists of the time. The search for truth and authenticity and the nuances brought by this photographer to difficult moments throughout his life are a great source of inspiration for the trio.

Trio Khaldei likes to bring together music from times past and present in its programs, introducing the public to music by lesser-known composers as well as the great masters. The program Debuts offers trios by Gaspar Cassadó and Gillis Sacré together with Shostakovich and Sibelius. In the program WWI, Debussy’s sonatas and Ravel’s masterly trio accompany a magnificent trio by Enesco.

Belgian music also occupies a special place in Trio Khaldei’s repertoire. Works by Jongen, Celis, Van Landeghem and Brewaeys are to be found on the trio’s music stands, alongside premières of works by Ruben De Gheselle, Mirek Coutigny and Gillis Sacré.

The funds raised will go to our non-profit making organisation (Trio Khaldei, vzw), to be put towards the recording and production of our CD.

This budget will be divided into the following categories :

The Recording (4.500€)
The recording location is of prime importance in classical music as this directly influences both the sound and the spirit of the recording. We are lucky to record our CD in Studio 1 in Flagey, which has an ideal acoustic for this repertoire.
The quality of the recording is also of utmost importance. Our sound engineer will attend for the four days of recording as well as the few days of editing, mixing and mastering.

The Formatting (900€)
The difference between buying an album online and having a real CD is the pleasure of possessing something tangible.
This part of the budget will cover the visual element of the CD:
- The design of the booklet
- The pictures and image rights
- The text of the booklet, including the translation into 3 languages (FR, NL, EN)
- The text will be written by Pieter Bergé, musicologist at KU Leuven

The Production (4.200€)
As well as the CDs sold by Paraty, we are pressing 1000 CDs for our (non profit-making) organisation. These will go to you, the supporters of this project; to concert organisers for the promotion of the trio; and also for sale at our concerts.


ACKNOWLEDGEMENTS________________ _ _
We would especially like to thank Flagey and Nicolas Callot without whom this recording would not be possible.
Our sincere thanks go to you, the music lovers, who are supporting us in this great adventure. We are extremely grateful for your backing, and look forward to sharing our passion for music with you at our concerts and through our forthcoming CD !

Your name on our website + 2 tickets to our “hundredth concert”

4 CDs + your name in the CD booklet

Your name on our website + 2 tickets to our “hundredth concert” + 2 tickets to a Trio Khaldei concert of your choice + 4 CDs of your choice signed by the artists + your name acknowledged in the CD booklet + the possibility of attending one of the recording sessions of our CD + a private concert by the trio (within a radius of 200km of Brussels, programme and date to be arranged with the artists, decent grand piano required)

Private concert with our programme “surprise”

Your name on our website + 2 tickets to our “hundredth concert” + 2 tickets to a Trio Khaldei concert of your choice + 4 CDs of your choice signed by the artists + your name acknowledged in the CD booklet + the possibility of attending one of the recording sessions of our CD + a private concert by the trio with our programme “surprise” (voted by the audience the evening of the concert from a selection of our repertoire, using an app designed for the trio, within a radius of 200km of Brussels, decent grand piano required)