Come be a part of CelKilt's new album and share The Power of the Kilt! 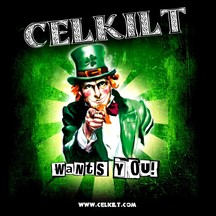 Celkilt joined forces in 2011 around Titou Mac Fire, Loic MacWind, Drick MacWater, Rems MacGround and Ana MacFive ,and has built it's universe around rock'n roll, kilt, traditional music and punk, becoming of the best Celtic live acts in Europe, and growing on the International scene (US, Canada, Switzeland, Germany, Italy...)

Today, after 5 Eps, the band is eager to think bigger with this next album, and still keep its independence.

YOU ALREADY KNOW US?

If you already know us, you probably attended one of our shows, you know who we are (and what we are capable of!) and you're here for a reason!

Deep inside, something directed you to got to know more about us, to be a real part in this adventure, to join the team... You've probably been secretly dreaming of becoming a member of the band...

And that's a good thing, 'cause we need you !

This time, we won't ask you to dance a jig, to jump along with us, to scream "Hey!" with MacWind, to do wild circle pits like the little psycho you are. Nope. For the first time, we're asking you to participate to the album's birth and life !

Our new album is on the way, we'll record it at the end of the year and this time we want to make it big ! We can take care of all parts of the recording process (we put aside 1€16 in a jar every morning since 2011), but it you want :

* To hear us on your favorite radio station

* Get us on Jimmy Fallon's couch

* See our beautiful faces on the subway walls

*Read our latest adventures in Closer

In a nutshell: if you want us to become the Biggest Band in the Universe and give us a fame up to our exuberant megalomania : you'll have to break open your piggy bank, request an inheritance advance, push grandma into the nettles, discreetly steal your spouse's credit card, etc.

But don't worry, we've been nice to you, and we thought of awesome crazy counterparts that will hopefully equal your unfailing support !

Celkilt has always been fully independant, and for this new album we'd like to sail our little ship even further !

Beyond the cost of production of the album in itself:

All this costs a lot of money! So, if we can count on you to support this adventure, we can take the Power of the Kilt even further !!!

***The MacDownload*** : Digital version of our new album+ 1 surprise bonus !

***The MacLucky*** : EARLY BIRD version of the MacPack Premium VERY LIMITED EDITION!! : The New Album in special Digipack Edition signed by the 5 members of the band + Your name in the booklet + 1 beer mat + 1 sticker + Digital version of the Album + 1 advance single !

** The MacPack*** : The New Album in Special Digipack Edition + The Album in Digital + 1 single in preview !

***The MacPack Premium*** : The New Album in special Digipack Edition signed by the 5 members of the band + Your name in the booklet + 1 beer mat + 1 sticker + Digital version of the Album+ 1 advance single !

***The MacFire*** : The MacPack Premium + 1 hand-written lyrics of one Celkilt's song of your choice + 1 guitar strap customized by Titou MacFire!

***The MacShow*** : The MacPack Premium + 1 special crowdfunder Tshirt+ 2 tickets for the concert of your choice (limited per concert, to be determined with the band)

*** Le MacBackStage***  : The MacPack Premium + 1 special crowdfunder Tshirt + Tickets & backstage passes for 2 (limited per concert, to be determined with the band)

** The MacWhistle***  : The MacPack Premium + 1h Whistle Lesson with the Master Loic MacWind and take your whistle home! + 1 Ticket for a show (date to be determined with the band)

*** The MacSkype*** : The MacPack Premium +A mini acoustic show on Skype !

*** The MacRecord*** : The MacPack Premium + Come play or sing with CelKilt on one of the band's tracks and take home the recording and video on a Celkilt usb stick! (On the day of a show anywhere on the 2017 tour)

***The MacDirty*** : The MacPack Premium + 1 of our old Kilts from the 2014 Tour (that we wore at every show!) + 1 old tank top and a Drik MacWater's sweatband ( worn on stage !) + 1 old backpipe reed & 1 tin whistle ( used on stage by Loïc MacWind) + Old bow's horsehair , a bandana, tights and panties from Ana MacFive (washed and clean, we are not savages!) + 1 stage tshirt , 1 old socket , 1 Capo and old strings from Titou MacFire + An old setlists pile + 1 used drumhead and broken drumsticks from Rems MacGround +All of Celkilt albums (signed bluntly by all the members) + The Merchandising Fails + Help load the MacBus after a show and get bullied by Jordan MacSound (because you'll never be doing it right !) + 1 phone call from the band (after some beers in the middle of the night!) + 1 acoustic show via Skype + You'll be a member of The order of The Dirty Kilt ( with all that it implies: your name in the Digital booklet, your pic on the website, An official ceremony in your honor on a show of your choice!)

***The Maclife*** : The MacPack Premium + An official Celkilt 2016 Kilt (never worn before!) + 1 tank top and a sweatband by Drik MacWater (never worn either!) + 1 tin whistle (used only once on stage by Loïc MacWind) + 1 bandana, tights and panties from Ana MacFive (just tried on to be sure!) + 1 stage tshirt, 1 Kilt sock, 1 Capo and strings from Titou MacFire (All brand new!) + 1 setlist for a future show + 1 new drumhead and new drumsticks signed by Rems MacGround +All CelKilt albums (including the new one of course) + Stuff from the Merchandising (All new and very nice!) + Manage a Macbus loading and yell on Jordan MacSound because he's not doing it right (after a show of your choice!) + 1 phone call from the band - sober and very nice ! + 1 acoustic private show via Skype , we'll play all your favorite songs + 1 Lifetime free pass to every CelKilt show (just let us know when you'll come one month before!) + You'll be a member of an order of The Big Kilt ( with all that it implies: your name in the Digipack booklet, your pic on the website, An official ceremony in your honor on a show of your choice!)

*** The MacVideo***  : The MacPack Premium + 1 special crowdfunder Tshirt + a small role in the cast of a music video off the new album ! (shot in the surroundings of Lyon, date to be determined with the band)

*** The MacKilt***  : The MacPack Premium + 1 official custom CelKilt Kilt with Belt and Sporran customized by the band!