I need you to finance Mademoiselle Slassi's hats web site. A web site that will turn heads !

Hello ! I'm Karima Slassi, a milliner of the 21st century. I'm the designer and founder of the hat's brand Mademoiselle Slassi.

I'm not going to change the world with my project... but at least, I'm triying to make it... nicer.

Hats for the 21st century :

My hats are retro inspired but they are definitely contemporary hats!

It is this mix, betwen nostalgy and modernity, that seduces people, make them dream and induces the desire to wear my hats.

Before going further, this is a very special note for the men out there:

Yes I do make hats for men. I just do not have good professional pictures of men wearing my hats, yet. And I'm sorry for that.

But, that's part of my project and you will see some great pictures of men wearing my hats on my future web site!

Mademoiselle Slassi hats are plain or extravagant, sensible or sassy.

They lend themselves to individual beauty, imposing nothing and allowing the wearer's personnality to compose itself a story. They set off the body rather than vice versa.

Hats for a very special day ; hats to be special every day...

The rich palette of colorsand the infinite range of details bring a seductive "twist" to these hats; They can be worn every day as well as on a special occasion.

Artisan, made in France, with love  :

To me, the goal is to design hats that will enhance each one unique beauty and will give the final  touch to a silhouette.

Therefore my hats have the wearer in mind.

Their shapes are timeless and fits harmoniously all faces and complexions. Comfort ia also essential.

The shape of a hat is made by blocking the material either on a wood block or on an aluminium shape.

For a unique piece I will favor the wood block but for series I will choose aluminium.

I work with artisans in France and most of my suppliers are located in France too. But I'm part of wider chain of artisans: some of them are located in South America (mainly for panama straw), or the Philippines (mainly for sinamay and buntal) and some in East of Europe (mainly for fet) with whom I work too. All of us have either choose (or not) to work around hats and all of us are fighting eveydday to keep the love of hats alive and to improve our arts and know-how.

For summer hats, I use various kind of natural straws, finely braided or weaved.

I love colors, bright or subtile; because, to me, a hat should bring some joy.

It's in the sophisticated details that Mademoiselle Slassi hats stand out.

Spruce bow, precious ribbon, cheeky feather, sparking crystal, poetic embroidery... Just the space around your head to write a little piece of poetry and to create the desire.

No limits to Inspiration :

When I create my collections (fall-winter, spring-summer, weddings and parties), I'm inspired by Life: nature, art and poetry, history and stories, people that I ahve met here and there, icons, music and cinema, architecture, fashion... anything!

When I create a bespoke hat, then I'm solely inspired by the future wearer. I try to discover who is the man or the woman who would be under this future hat: his or her personnality, style, ideas, personnal story, dreams and even fantasies...

Some call my itinirary a "carreer change"...  I call it: passion and desire of freedom !

After 15 years as an IT project manager, I have decided to realize a dream: designing hats!

I took some classes, worked few months in some workshops and soon after Mademoiselle Slassi was born, in 2009 !

To promote myself I built in few hours a web site called www.hatsandchapeaux.com   (warning: this site is now more than ugly!!!).

But thanks to the magic of the web and the search engines, plus some beautiful pictures of my hats taken by some talented photographers, I quickly got found by my first customers and that's how I started developping my business.

After mu first orders for bespoke hats during the wedding season, I was contacted for unexpected requests like an order for Miss Universe Japan 2009.

And even for the World Chocolate Master 2009, an international contest for which I had to create some hats that will be covered with chocolate! At that occasion, I was featured in a TV program on Dicovery Channel in the US.

Succes is confirmed when I showcase my hats during some designers markets. At the same time hats are making their coming back on the catwalks and in the streets!

I'm happy and decided tmore than ever to pursue my dream.

But quickly, I find out that it's extremelly difficult to live of hat making nowadays and that I have no visibility.

And, sice I have no money to open my own boutique in Paris, I decide to create my own collections and to sell them to boutiques worldwide. For that I must participate to international tradeshows.

In 2010, I present my first collection and I get my first big orders from Japanes stores! I cannot believe it!

Then, season after season, I get more orders from Japan, USA, Corea...

In the meantime, I still develop my private client base in France and worlswide, and I even have returning customers who are now "addicted" to Mademoiselle Slassi!

Surprisingly, in Paris, I have very few points of sale. But I'm proud to be featured at  Franck Et Fils duirng several seasons.

In 2011, I'm contacted by Agnès b to design hats for her catwalk and for her collection. tTis partnership will last several seasons ans that was a great experience but also the proof that Mademoiselle Slassi was the equivalent of quality and timeless style.

In 2012, I'm featured on the french television in a program dedicated to my "carreer change". My brand is also featured in the media but not enough to create a "buzz"...

Until 2013, I'm capable to do it all successfully by myself. But suddenly I'm hit by the crisis. I thought I was protected under so many hats!

Most material cost is increasing as well as the labor cost of my few subcontractors. And the cost of the tradeshows are a huge expense!

I decide mid-2013 to not attend a tradeshow. Of course, I loose customers because buyers fly to Paris and expect to meet designers at the tradeshows; they have no time to meet a little brand like mine individually while they are in Paris for only 3-4 days.

My absence during the last 2 professionnal tradeshows has increaside the lack of visibility for Madamoiselle Slassi.

But thers is worst! Because I do not have a professionnaly designed web site, I can't communicate with the press, the department-stores, boutiques over the world.

Just by looking at my current web site, my brand is descredited.

I urgently (before end 2014) need a beautiful web site to communicate with boutiques and other professionnals of the industry; but as well with individuals.

This new web site has to reflect the elegance and the quality of my hats.

Without it Mademoiselle Slassi will disappear and ity will be the end of my dream.

Currently my finance do not allow me to invest in this project.

That is why I have decided to call for a crowdfunding. This is today the only system capable to help small entrepeneurs and young designers to take off when they are stuck and cannot get the help from the banks.

That is why I'm today onKissKissBankBank.

Indeed, that's the minimum to get a new and profesional web site. But, this site will be simple, elegant and economical.

- 800 euros : that goes to the graphic designer to work on my logo and the visual aspect of the site

- 200 euros : that goes to KissKissBankBank; without them I won't be there; they deserve their 8% commission

But if I receive more than 2500 euros, that money will be used for the photos !

without beautiful pictures my site wouldn't  really turn heads... I need to organise a shooting with professionnals: photographer, make-up artist, models... and that's not free!

- With 500 euros  l could pay for professional pictures of each single hat on a white background (about 30 pieces per collection).

- With 2000 euros  I could pay for few beautiful pictures that would illustrate the styles of  Mademoiselle Slassi. These pictures will appear on the home page of the site. For this shooting I will need a crew of photographer, hair dresser, make-up artist and models (man and woman).

And if the generosity goes beyond that, not only I will turn heads but I will fly!

If you love my hats, my life change and my project, and you feel like helping me to improve and develop my business and to make it sustainable, this is were your help will go:

that's where I will meet again professional buyers and get orders from department stores and boutiques from all over the world.

that's the professionnal who will develop my relationships with the press and will increase my visibility in the media.

I have the project to create a hat collection where I will collaborate with some rare artisans. The materials and their know-how are expensive. With this money I will make the prototypes and I will present them to buyers of very selective concept-stores around the world. That will

generate work for these artisans and a better visibility of their arts.

THANK YOU so much and... Hats off for reading all that!

To share this campain, please use this link; you can send it to your family, friends, colleagues and you can use it on all your social networks : 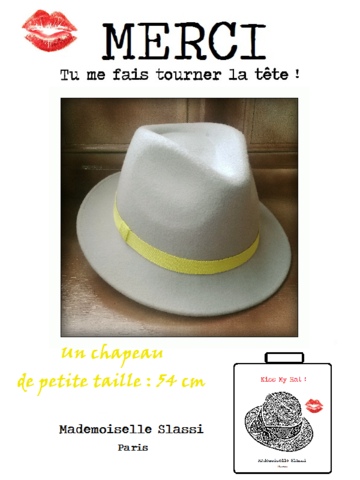 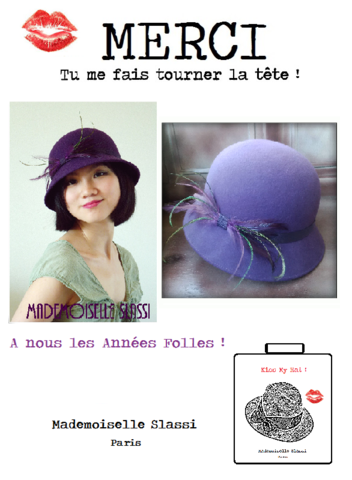 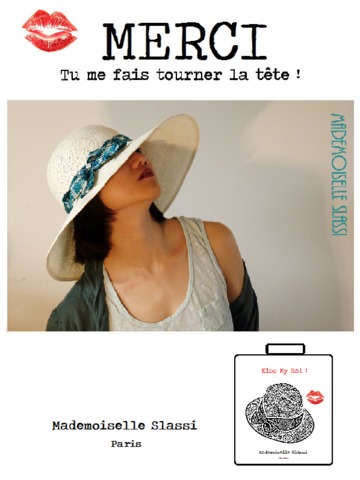