Discover South Africa today through the lenses of some of its most emblematic photographers. Ready for a trip beyond clichés? 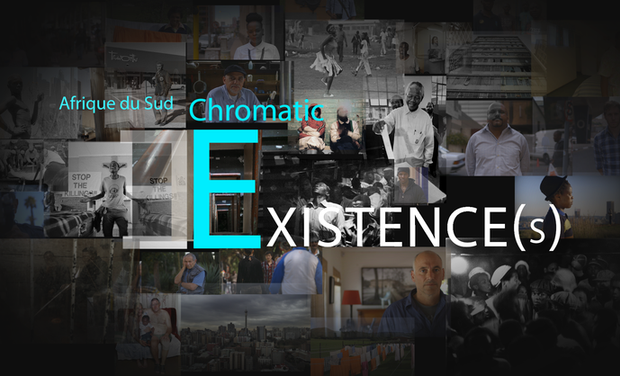 10 photographers, aged 26 to 83, from different social and cultural backgrounds, offer us a very personal point of view of their country. With a lot of humility and eager to communicate, the photographers share with us their questions or considerations regarding their country.   Every single movie establishes a different view on the South African society leaving aside the classical images of apartheid or post apartheid.   The topics are closely linked to the issues of the South African society: colour, well-known risks and dangers of the country, living together, origins, inequalities and social disparities, new landscapes, born free, out coming of different sexual identities.   Each web documentary is the piece of a puzzle, forming the image of a country in progress.   This web documentary is part of a larger transmedia project, which will be completed by a documentary movie to be broadcasted on ARTE in link with the 20st anniversary of the first free elections (spring 2014).  This movie focuses on history: the history of the photographers and their pictures is embedded in the story of their tumultuous country.

WHAT IS GOING ON?

In September 2012 we made a first trip to South Africa. Scouting diary september 2012. We had the chance to meet many of the photographers we wanted to include in our project and each and everyone agreed to participate! Their enthusiasm motivated us, their agreement and the short trailer that we made helped us to find our first broadcaster for the documentary movie, ARTE.

Cape Town, Durban, Kwazulu Natal, Johannesburg... we will be all over the place for 3 intense weeks.

Since the beginning it appeared as en evidence that we could not tell this story as a 100% foreign crew. We needed the know-how of people who are familiar with this country.

During this first amazing shooting we met and filmed 4 photographers, who moved us by their availability, their enthusiasm, their experience and their work. Take a look at Facebook Chromatic Existences the profil and visit their official webpages in order to discover these internationally renowned great artists.

Starting form June 7th we will meet 6 photographers. Every day we shared our adventure on :

The team with David Goldblatt

In 2006, we discover David Goldblatt at the Rencontres Photographiques d'Arles. It's a shock. His pictures reveal another story of South Africa and apartheid. He shows an intimate story that hardly crossed the borders of this country. Heir of Paul Strand and Walker Evans, David Goldblatt has never stopped photographing his native land, its contradictions, its values and its contrasts.

2011 Paris-Photo features South African galleries. Eager to know more about the contemporary photography of this country, we meet Zanele Muholi, a black lesbian activist and photographer. The former student of the Market Photo Workshop, a school founded by David Goldblatt, uses her art to defend the rights of homosexuals. Through her portraits Zanele Muholi questions gender identity and especially the presence of a body ignored by society. We never saw this kind of images before! Strong political, social and cultural statements emerge every time we meet a new photographer: Santu Mofokeng, Guy Tillim, Jo Ractliffe, Jodi Bieber, Pieter Hugo, Mikhael Subotzky ... We "discover" a unique photographic scene. We want to share this treasure.

After my graduation from the Femis in 1990 (specialization production), I chose documentary filmmaking as a discipline and focus on films and society portraits of artists. My interest in history and archival processing has led me to work on several topics dealing with World War I and I developed a series on the living conditions of the black population in the French colonies. My documentaries (in collaboration

with Editing  Productions) are broadcast on France 5, France 3 Ciné Cinémas and  TPS.

After my classes at the Ecole Nationale Louis Lumière, I realized my first short movie  Jeu de Paume, followed by the portrait of the photographer Nicolas Treatt for the Avignon Festival. My meeting with the choreographer Mathilde Monnier in 1987 confirmed my passion for dance and performing arts. My films, documentaries, recordings, choreographic drama as Bruit blanc and L’Homme qui danse, broadcasted by ARTE, treat specific topics such as autism or the issue of masculinity.

Along with my work as a filmmaker, I teach at the Marrakech Film School (ESAV).

We are convinced that the multiple identities, "rhizome" to paraphrase Edouard Glissant, are a fundamental wealth of our country and we are always committed to telling stories of “diversities”.

We started with theatre and came to television via the performing arts in 2005 (Multiscenik on France Ô since 2008, Pass Pass Theatre on ARTE since 2010, recordings in coproduction with France 2, France 3, TV5 Monde, Mezzo and ArteLiveWeb .. .).

Today we want to continue our commitment by exploring a new media.

In order to support this project, we have formed a team of strong personalities, of diverse and competent experts in their respective fields, each representing a force of proposal. Our sessions have defined the scope of action and enrich the project that we present today.

After my scholarship in khâgne and a career designated to literature, I decide to spend a year on the roads of Asia with a camera in my backpack.

At my return in 1994 I study editing at the Gobelins and become a special effects editor. I work for various production companies and television channels and I also develop my own motion picture projects.

The project Chromatic Existences started 18 months ago and since its very beginning the conscientious and hard work of the directors Valerie Urrea and Nathalie Masduraud and of the team bore fruit. Several organizations have already trusted us ...

The authors and directors Valérie and Natalie received the unanimous support of the Scam "Brouillons d’un rêve multimédia". The money allows them to start writing the project!

The transmedia project has been selected once again unanimously by the CNC "Aides aux nouveaux médias." The sum obtained allows us to visit South Africa in September Scouting september 2012

The documentary will be co-produced by ARTE, the project becomes real and we begin to organize the shootings.

The French Institute supports our project as part of the South Africa ‐ France Seasons 2012 & 2013: www.france‐southafrica.com.

We have hours of interesting interviews, tons of breath-taking images, 100 ideas per minute, but we lack of the resources to successfully complete our project.

We need exactly 14,860€ to ensure the fundamental and final step of this adventure: the editing of the 10 web documentaries.

Now you really know everything, the issue of this adventure depends on you ...