Support the edition of CINEMA MAKERS, the book of the Tour des Cinémas exploring the reinvention of European cinemas! 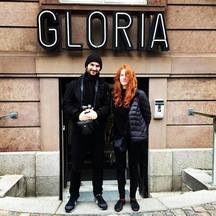 Over the past few years, we travelled across Europe to meet over a hundred independent cinemas, seeking inspiration for the creation of our own cinema. By travelling through countries with different cultural, social and political environments, we witnessed the emergence of a new movement that is reconsidering how to create and run cinemas.

In CINEMA MAKERS, we take you to significant venues at the forefront of this movement and tell you their stories. Discover the incredible people pushing the boundaries of what’s possible - the people who have inspired us in the creation of our own cinema. This book is born from our desire to share these amazing stories with you.

We need you, your support is vital:
By pre-ordering Cinema Makers now, you will receive it in early December!

The project of the Tour des Cinémas was born on the internet, with a site which gathered together the best ideas we found during our trips, as well as articles we wrote about the cinemas we met. Every day, we shared our discoveries and what we learned through the discussions with each cinema’s team. We want to give this project a physical conclusion through the publication of a book, a beautiful object to be treasured. After selecting more than twenty iconic cinemas, we conducted new interviews to supplement and enrich the articles written over the years. This book is the testimony of a time of transition where the relationship people have with cinema is changing and evolving.

> Meet the Cinema Makers within the pages of this beautiful book

What does the Wolf in Berlin, the Deptford Cinema in London and the Dokukino in Zagreb have in common? Throughout Europe, enthusiasts are rethinking the cinematographic experience and reinventing what a cinema venue can be in the digital age. Involve the audience from the start, invent new spaces, explore the creative ripples of our time by welcoming new content, invite creation to happen within the cinema walls. This is a new movement which reaches across the continent. For several years, Agnes Salson and Mikael Arnal set out to meet the innovative "Cinema Makers" in search of inspiration to launch their own cinema. This book is both a testimony to a changing time and a sea of ideas to inspire cultural projects. The authors present an unprecedented view of groundbreaking cinemas in Europe, their inspiring experiences speak to anyone interested in cinema, and show us that anything is possible.

We wanted to work with a local printer: Escourbiac, located near Toulouse (South West France). They specialise in art books and, importantly, have FSC certification that ensures responsible management of the forests. What's more, we have chosen a very nice paper!

We’ve also created A2 posters of the illustration made by Antoine Corbineau as a reward for supporting the project (on 120g paper, sent in a tube).

Mikael Arnal, filmmaker, and Agnès Salson, graduate in “Exhibition/Distribution” from the french cinema school La Fémis, have been collaborating for many years. Together, they created the Tour des Cinémas project, co-founded the cinema La Forêt Electrique in Toulouse, and launched Electric Animals, a production company. They co-wrote their first book Dream the cinemas, tomorrow (ateliers Henry Dougier, 2015) which chronicles their French tour of cinemas. They want to make the cinema a creative ecosystem rooted in the city, embracing new practices and new forms of moving images.

He coordinates the realisation of the project and the link between the various stages of production.

She is in charge of the graphic design of the book.

He made the beautiful cover illustration of our book.

Many thanks to Europa Cinemas for funding the translation of the book into English and the CNC for supporting the publishing of cinema books.

And if we exceed the number of pre-sales, what do we do?

Your support is important!
If we exceed the amount, we can expand the project further:
> Increase the print run of CINEMA MAKERS
> Explore the project in other forms (a photo exhibition for example)
> Organise a party!

You will of course be informed of each step!

Pre-sales purchases will help us to estimate more precisely the number of copies to be published and will play a part in covering some of the costs associated with this book:

Proof-read by Jen Davies : thank you so much! ♥

Pre-purchase of the book - EARLY BIRD We send you 1 copy of CINEMA MAKERS directly to your home before its release.

An exclusive ILLUSTRATED CARD of the cover (postcard) with a note to thank you!

Pre-purchase of the book We send you 1 copy of CINEMA MAKERS directly to your home before its release + an exclusive ILLUSTRATED CARD of the cover (postcard), personalized of course ...;)

Pre-purchase of the book + a nice poster We send you 1 copy of CINEMA MAKERS directly to your home before its release + a nice POSTER of the illustration format A2 (on paper 120g, sent in a tube)