Support independent documentary filmmaking! Participate in the edition of a DVD box of 10 films that marked the Millenium Festival! 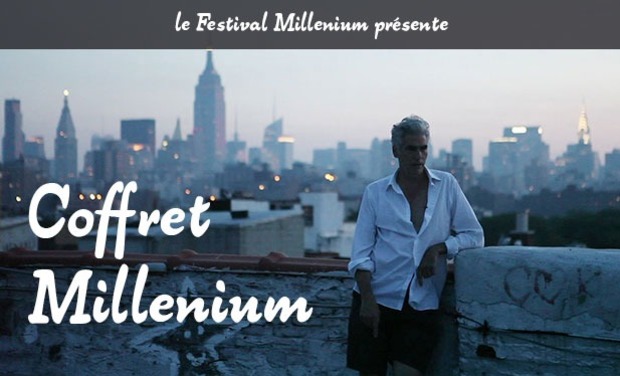 What is the Millenium Box?

- 10 documentary films that are milestones of 10 years of Festival

- A DVD box produced in 300 copies: to give a new life to these films

In the complex world in which we evolve, documentary film seems more necessary than ever. It gives us keys to understanding our society and to deal with current international issues. It has the power to shake our indifference and become a powerful call to action for each of us.

Behind each of these films, there is an independent filmmaker, who has often devoted years to the realization of his project. Years of work, and a far too short life for the movies!

In order to give a new lease of life to those films that deserve to be (re) discovered, the Millenium Festival has decided to publish, for its 10th anniversary, a box of 10 independent documentaries that have marked the history of the Festival: the Millenium Box. Ten films dealing with universal issues and that meet the values ​​defended by the festival. Ten films that touched, questioned, challenged, marked, selected by Lubomir Gueorguiev, President and co-founder of the Festival, and Zlatina Rousseva, Artistic Director and co-founder:

"Of the 800 films selected for the Festival, these 10 films deeply moved me and stayed in my memory. They revealed things about the Other and about myself that I could not imagine, even if I thought I knew about them. They show that it is often in the most difficult situations that true humanity manifests itself. They have such depth that every time I see them, I discover something new, they arouse new emotions. "

"For the 10 years of the Festival, we want to pay tribute to these filmmakers, give a second life to these rare films, and share them with people for whom the documentary is a passion and a way of thinking. "

To support independent documentary film, it is essential that we be independent ourselves. This is the guarantee of quality programming both from the point of view of artistic choices and our social commitment. It is to maintain this independence that we appeal to your support.

Support independent documentary filmmaking, discover these masterpieces of documentary and give new life to these films!

Ash and Money by Tiit Ojasoo and Ene-Liis Semper

“If the Parliament can sometimes do bad theater, then we can do good politics”

A World not Ours by Mahdi Fleifel

“What does it mean to be lifeless, without perspectives? Have we reduced the world to a waiting camp, a transition camp for a better life?”

“How to (re)question our own culture starting from the perspective of the Other?”

“In a society so obsessed by image that it forgets human relations, four years of shooting this documentary allowed an individual to experience the deepest and longest relationship of its life”

Japan: a Story of Love and Hate by Sean McAllister

“A strange love that withstands the challenges of daily struggles”

“A long journey to discover that love is stronger than hate”

My Love Don't Cross that River by Jin Mo-young

“Romeo and Juliette is an ageless story”

The Good Postman by Tonislav Hristov

“At the borders of Europe, some of the first witnesses of immigration are simple villagers being asked questions about values to which each responds in its own way”

Toto and his Sisters by Alexander Nanau

“In the face of an uncomfortable reality, documentary cinema is able to challenge our indifference”

Concretely, you will find in the box:

- A selection of the 10 films that have struck us the most, affected, shocked - simply moved - over these 10 years full of discoveries!

- DVDs in original version subtitled in French and English.

The edition of a box of 10 DVDs requires a long technical work, from the management of the copies to the pressing of the DVD, through the preparation of the masters, the subtitling ... It also includes a graphic aspect for the illustration and the impression of the box itself. Finally, it also requires the purchase of the films copyrights, which allows us to support them directly.

All of this has a price, of course, and we think that making these films available is worth it.

Concretely, the preparation of the masters for the DVD, the sending of the copies and the subtitling of the films in English and in French are already supported by the Festival.

The money collected on KissKissBankBank will be used as follows: