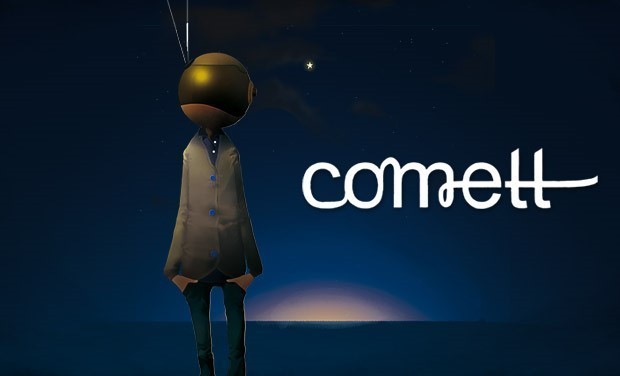 Comett is a French electro pop band, founded in 2005 by Alex C.P. It is therefore only after several trips abroad (1 year in London and 2 years in Dublin) that the composition of a first album occurs.

Back in Paris, Alex is able to surround himself with talented and creative people, beginning with Julien G., a drummer and rhythmic programmer who can refine the musical tone of the songs as the tracks are exchanged back and forth from Paris to Tours.

Mixing and matching audacity and skills with music, cinema, and graphics, the album will eventually tell a story and will be entitled “ My reality is your fiction ”. Very soon after, Yoann Auzanneau (a.k.a. Ozano, a graphic artist, joins the project, creates the characters, and puts the story in a retrofuturist world.

Comett records the full album at “home” in 3 years, the final mixing and mastering is realized by Antoine Chaperon (Grisbi). A first stop-motion video is produced by les Lapins de l’espace (Grandville, I am un chien, Hawa, Bob the monster…) under the direction of Romain Wagner.

The video introduces the album “My Reality is Your Fiction” with the single “ Once upon a time / City of lights ”. With no marketing, the video and the song are quickly taken up by social networks, blogs and other Web sites.

Proof of its uniqueness and originality, the single is part of several festivals including the International Festival of the clip (Protoclip), and won an award at the festival clip of Barcelona. Comett will release his first album during 2014.

Thanks to you, we will finalize the release of our debut album including:

The album is ready to listen and waiting for your support!

In case we receive more money, we will use this money to record a second album.

DIGITAL PACK = The entire album (12 tracks) in MP3 as soon as the crowd funding ends. (End of April)

PACK PREMIUM = Before its official release: A 12 track CD including original Artworks by the artist "Ozano" + the entire CD (MP3) + a custom message from the group.

RARITIES PACK= PREMIUM PACK + 6 unreleased songs (rarities) in MP3 + the Video clip in HD of "Once upon a time the city of lights."

THANKS PACK= DELUXE PACK + your name on the CD + on facebook.

REHEARSAL PACK = THANKS PACK + 2 hours in rehearsal with Comett (in Paris or Tours) to learn a song or to play a song of your choice with the band!

ACOUSTIC PRIVATE LIVE PACK = Only for France (possibility for belgium) sorry (unless you pay for the flight/train). THANKS PACK + an acoustic live of Comett. Comett in your house!

ELECTRIC PRIVATE LIVE PACK= Only for France (possibility for belgium) sorry (unless you pay for the flight/train). THANKS PACK + an ELECTRIC LIVE OF COMETT in your house or in a venue chosen by you.

THE GUITAR PACK = THANKS PACK + official signed guitar that served for the recording of the album. To pick on PARIS + a free beer to drink with Comett in Montmatre!