Help us to accomplish this concert that joins different artists involved in boosting projects dedicated to children in difficulties. 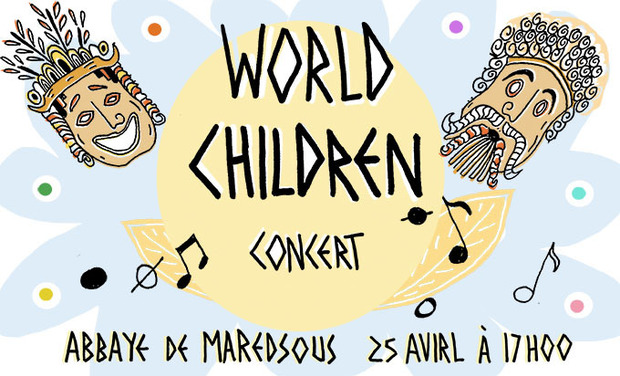 World Children presents a concert at the Maredsous Abbey on April 25, at 5pm

This is a charity concert to get funds for the organizations: Chorales Equinox and Sagapo Children Foundation

You can find the following artists at this concert:

The legendary Vasilis Lekkas, famous Greek singer, joins the Equinox groupe at La Petite Maison, the psychiatric hospital for children and adolescents in Chastre, inspired by Virginia Atala Vivanco with her wonderful "Hymn for Childhood", accompanied by the pianist Pau Baiges who also heads the group Equinox and also Jacques Alphonse de Zeegant with his compositions for piano and voice. Together they will make this special event which will mix cultures and harmonious sounds.

Together, the accomplished artists get involved to boost projects that dedicate to children in difficulties, and that aim to bring relief to their trouble.

The main goal is to give children access to the music world, through a structured and socializing activity which helps them to develop a both personal and collective fulfilment. These objectives are of particular value when it comes to children in a situation of social exclusion.

Vasilis Lekkas first appeared on the music scene in 1980, singing Manos Hadjidakis’ music compositions, titled "Mellisanthis' season”- “I epohi tis Mellisanthis”. That work was the beginning of a long collaboration on eight discs, many concerts in Greece and abroad and theatrical performances.

Pau Baiges was born on 1984 in Barcelona. He started playing piano at the age of 6. He studied in Barcelona with Leonid Sintsev, in Munich with Vadim Suchanov and in Brussels with Aleksandar Madzar. He also received advices from Alicia de Larrocha and Joaquin Achucarro. Pau wanted to expand his musical horizon by studying Jazz, improvisation and conducting. Thanks to that, he could work in Gran Teatre del Liceu (Barcelona) and conduct several projects of Opera for children and musical theatre. Nowadays, Pau lives in Brussels and works for Equinox in "la Petite Maison" in Chastre.

Virginia Atala Vivanco, born in Lima, Peru, without any artistic career, will play us her composition "Hymne à l'Enfance" aiming to hommage all children in the world. Her dream child to help children in difficult situations, while she was a privileged child, will come true.

Jacques-Alphonse De Zeegant (resident composer at the Hulencourt Soloists Chamber Orchestra) followed his studies at the Royal Conservatory of Brussels. He was a pupil of André Dumortier and Valery Afanasiev. In the 80s, he lived in Africa, eager to spend his early years in the service of humanitarian work. He is the author of numerous works for solo instruments, orchestra and choir, some of which have been recorded as the oratorio "The Mystery of Hi" or his first concerto for piano and orchestra, violin and orchestra.

The collect will help financing :

This is a Charity concert to collect funds for Equinox Choirs and Sagapo Children Foundation. The money that exceeds the expenses will be for this organizations.

The Equinox project is dedicated to creating and developing children’s choirs; underprivileged children, children in social difficulties, or disabled children. It is a substantive project - for the long haul - geared to getting music to “take roots” in environments were conditions are not a priority for it to grow. Equinox is a matter of sharing art and culture, and also simply, equality - to feel as a musician. This process helps build solidarity among children, the sense of the other, friendship, and develops - of course - the self esteem.

Sagapo Children’s Foundation is a humanitarian organization dedicated to working with children, families and their communities worldwide to reach their full potential through education. Sagapo commits in creating awareness to transform lives and restore hope. By educating the children of today, we envision positive change in current communities, and encourage the passing on of their knowledge to future generations.