A family strategy game, full of twists and turns where speed and haste should not be confused! 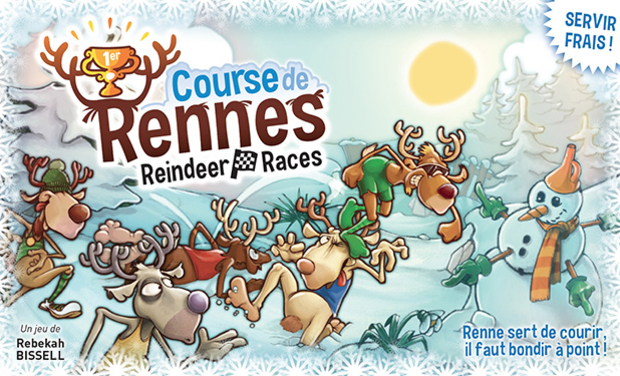 Before reindeer can fly, they must learn when to jump!

REINDEER RACES is a game that is simple enough to be accessible even to the very young. However, don’t be fooled into underestimating its mechanics. Under the guise of a friendly game, savvy players may be secretly plotting, concealing their strategy till the last moment. With a gleam in their eye, they throw down a handful of cards. All of a sudden, their reindeer shoots forward to the goal, leaping over the heads of the other reindeer, leaving the competition behind in a single turn!

Tested and approved by players of all ages and backgrounds!

Everybody knows the reindeer who heroically pull Santa’s sleigh every year on Christmas Eve! Anyone in the world is able to cite Blitzen, Dancer, Prancer, Comet...uh...uh...Vixen, wait...Grumpy, Dopey...uh...Melchior... Well, everybody knows!

And everyone is wondering, “How does Santa go about recruiting such amazing reindeer?” It’s a very simple and closely guarded secret. The answer is in the box!

Every five years, when the aurora borealis lights up the sky, the people of the North organize the "Reindeer Races" to choose the best reindeer. From all around the world, reindeer reunite at the North Pole, hoping to win the races and join the ranks of the elite. Their ultimate goal is to earn the prestige and honor of pulling Santa's sleigh.

The competition is tough, intense, and merciless. To win, each participant must do his best, holding nothing back, in an effort to leap farther and higher than the others. Five treacherous tracks await the brave reindeer, and at the end of each, trophies are awarded to the most daring. Will you be one of them?

Age: 6 years and up (or younger, if accompanied by an adult)

For more information, feel free to download the rules on the following link: GAME RULES IN PDF (in French).

Note: This is a text-only version of the rules.

We will add the final version as soon as it is completed. The file is in French for the moment, but the translations in English, German, Spanish and Dutch are underway and will be available soon.

About the Designer: Rebekah BISSELL

Rebekah started out by making games for her own children and then graduated to print-and-play contests on Board Game Geek, where she has won several awards.

She especially likes games that are fun for both adults and children.

About the Artist: Sébastien DRILLON

Senior Graphic Designer and specialist in rough events, this father of a 10-year-old girl is a true gamer.

Eager to return to his first love, illustration, he’s getting back to his roots at Robin Red Games.

His first game was "Généalogik" and following this successful experience, he immediately began to work on "Reindeer Races" to the delight of his daughter and publisher.

About the Editor: Robin Red Games

Robin Red Games (http://www.robinredgames.com) is a publisher founded in 2012 (a new company!) by Pascal Boucher and quickly followed by Yves Roig.

Each game is fully designed and manufactured by Robin Red Games in France.

Since its inception, Robin Red Games has designed and edited 14 games. Accessible to all ages (some for as young as 4 years), four of these games are also available in French and English Braille versions for the blind, so that everyone can enjoy playing together equally.

The money collected will cover some of the costs of making the game as well as various other costs (shipping, prototypes and kkbb commission...). The rest is funded by Robin Red Games.

The nature and size of "Reindeer Races" are on a larger scale than previous productions of Robin Red Games, and its funding is, too.

It is thanks to your support and your pledges that we can complete this adventure (to the delight of young and old).

If this project goes beyond our expectations, we plan to improve some aspects of the game:

- A bigger rulebook with more diagrams.

However, the designer has worked on three expansions. The game, as it stands, is already very addictive, but with expansions, it can be even more fun! In addition, each expansion allows you to add another player. Instead of a maximum of 4 players, we could go to 7!

- If we reach 5,000 €, the expansion THE LONE REINDEER becomes available at no additional cost to all contributors who have pledged to the levels : KISSKISSBANKER, ALLBANKER, FANBANKER and PROBANKER. If the goal is reached, the expansion will be officially released on March 1, 2015. However, you will receive it along with the base game-several months ahead of its release (lucky!).

- If we reach 6,000 €, the expansion SUPER-REINDEER also becomes available at no additional cost to all contributors who have pledged to the levels : ALLBANKER, FANBANKER and PROBANKER. If the goal is reached, the expansion will be officially released on July 1, 2015. However, you will receive it along with the base game-several months ahead of its release (very lucky!).

- If we reach 7,000 €, the expansion LUCKY THE REINDEER also becomes available at no additional cost to all contributors who have pledged to the levels : ALLBANKER, FANBANKER and PROBANKER. If the goal is reached, the expansion will be officially released on November 1, 2015. However, you will receive it along with the base game--several months ahead of its release (very, very lucky!).

SOLIDARITY! Thank you for supporting the project! Your name will appear in the credits on the Robin Red Games website.

SUPPORTER! Your name will appear in the credits on the Robin Red Games website. All PDF files of the game to download.

KISSKISSBANKER! Your name will appear in the credits of the game. All PDF files of the game available. 1 Exclusive Badge. 1 copy REINDEER RACES. 1 Expansion THE LONE REINDEER (If 5,000 are collected).

KISSBANKER! Your name will appear in the credits of the game. All PDF files of the game available. 1 Exclusive Badge. 1 copy REINDEER RACES.