Cyclovent ("wheels to the wind" in french) is a sports and creative biking adventure on the forgotten Eurasian paths. 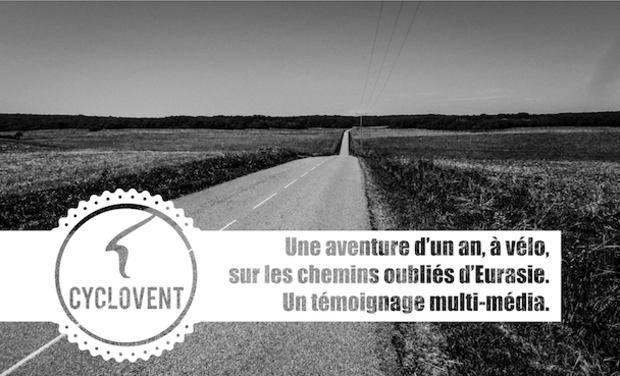 How does people live at the end of the roads that does not exist on the map ? What happens byways ? At the time of the highways and high speed trains, we take the tangent to the paths that nobody talks about , but where life goes on. Now Boarding !

Our Grail is : forgotten and unused roads in France, Germany, Poland, Russia, Mongolia, Central Asia, the Caucasus and the Balkans. The 500 night stops would be:  wild camps , gardens, hearts of men.

Our values :​​ never sleep in an hotel, share this amazing adventure with sincerity, and being energy independent thanks to our little homemade charging system.

To go forward : our legs and your support.

Cyclovent is also a piece of creativity that's sometimes poetic, sometimes bubbly but always original : sharing our feelings  while mixing sound and photographs, sound & poetry, sound & sketches.  All served with the right amount of spontaneity and honesty.

We are five : two humans, two bicycles and a stove

The humans: a couple of fearless adventurers (excepts for bears, snakes ... *): * Non-exhaustive list

- Simon, 30 years old at the next crossing, storage of food floor mats, visas and mapping manager. He loves : drawing the paths on the map at the camp. He does not like : cars and drizzle .

- Delphine is responsible for making the bivouac welcoming, head of organization, absurd ideas provider. She loves : making small drawings on the map at the camp , recording sounds , drawing ... She does not like : wiping the wet from the tent in the morning, crowded roads, starting late, expect after a wonderful encounter.

The bicycles, our brave companions : easy going, always up although sometimes a little flat.

The stove : "Flambeur" the burner, because without him we would be cooked ... or not! It helps us feeling brand new after a hearty meal.

During our previous experience, our taste for the byways matured. In Japan, as we were 22 yo,  then in Serbia, where we went on numerous occasions . In Morocco, Canada and Ireland in solo for Delphine. Cyclovent began to mature after the Ireland trip. First life experience cycling in Croatia ( Zagreb- Zadar) , many biking adventure in Brittany, in Burgundy etc ... The project matures over 2 years now. And, you know what  ? We are ready !

Thanks to your support, we would go further in this continent and ensure minimum of security (insurance, water filtration, vaccines) expensive but still essential.

It's a bit of everything we aim to bring you : not everyone has the opportunity to leave everything and go as we will do, have some travel with us, get some freshness , get a little spice in everyday's life. A little bit of sparkles from our routine to yours.

During our " connected " stops, we will share our last experiences and discoveries on our website with photos , drawings, sounds and sometimes movies. Depending on your support, you will have an exclusive and early access to our posts in addition to other rewards.

According to media brought back, we will achieve either a book, a film, an exhibition or conferences ... As contributors to the project, you will be invited to events related to adventure and your name will be mentioned prominently in our achievements.

CYCLOVENT a total and entire investment over two years.

Financial: a total budget of 13,000 euros, of which a personal investment of 8,000 euros including :

Technical : A to Z achieving of our website ( the website in french at that time) , the small clip (The little clip ), flyers, two handmade power usb chargers, sewing ( sleeping bag protections, saddle etc ...)

The 3000 euros crowdfunding will finance :