Trip to Utopia. The adventure of a « citizen awakening » in the heart a universal village 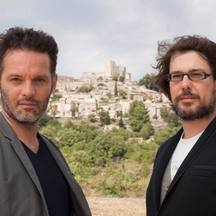 A documentary written and directed by Cyril Montana and Thomas Bornot

In the heart of Luberon, in a village called Lacoste, Pierre Cardin, multimillionaire icon of the fashion industry, has been buying for 15 years around 40 houses (1/3 of the village) and about the same amount of hectares left uncultivated.

Cyril Montana, a child of the region who became a writer in Paris, realizes that his village is in danger. Feeling alone and helpless while facing this situation, he decides to seek help from those who are actually changing the world around the world: thinkers and activists, philosophers…And this with the aim of finding concrete projects to revitalize the village.

Accompanied by Thomas Bornot who will film this quest, Cyril will initiate a real « Trip to Utopia » in order to find positive alternatives and we hope the result to be an inspiring documentary.

Cyril Montana is a writer. He was published several times (Malabar Trip / le Dilletante – La faute à Mick Jagger/Albin Michel). He also worked alongside Jacques Attali as a coproducer regarding the creation of the Positive Economy Forum.

Thomas Bornot is a director and producer of many documentaries.

Justine Henochsberg and Julie Guesnon Amarante, founders and producers of Les Batelières Productions. This production company has an editorial line that is built around social, political and cultural projects and also develops special contents for young audiences. Les Batelières Productions recently produced documentaries such as the « drama documentary » My American (way of) Life by Sylvain Desmille and also 2 short films and a musical content.

Present both yourself and your project. You need to capture your audience's attention: tell them a story! Explain to them who you are, what you do (the nature of your project) and what they stand to gain by supporting you. Be clear, engaging and positive. Don't be afraid to use images, gifs or videos to illustrate your points and make your visitors even more enthusiastic about the idea of supporting you.

The Lacoste Pack : the previous compensation + a private link of the film in preview

2 tickets for the « premiere » of the film in Lacoste or in Paris in the presence of Cyril and Thomas who will also pour you a drink after ! + The Lacoste Pack

2 tickets for the private "test screening" of the film in Paris in the presence of Cyril, Thomas and the producers where we will listen to your feedbacks on the first footage around a breakfast + The Lacoste Pack