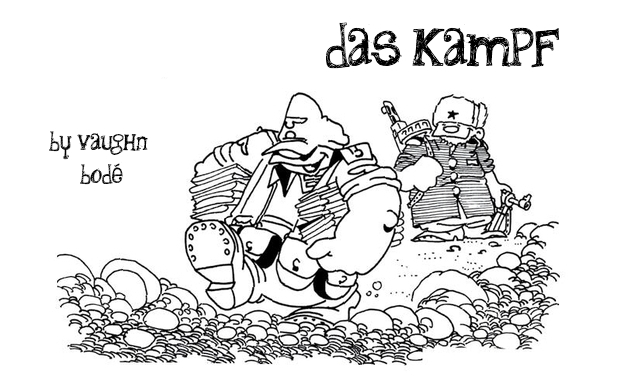 "War is sometimes wondering whether there could ever be intelligent life on this planet..."

In 1963, Dǎs KämpF, redefined comic-books. And created a whole new "genre": the comix.

Help us publish a new complete, unabbriged, blilingual (English and French) edition of this classic!

Vaughn Bodē (1941 - 1975) was an artist involved in underground comics and graphic design. He is perhaps best known for his comic strip character Cheech Wizard and artwork depicting voluptuous women. He was inducted into the Will Eisner Award Hall of Fame for comics artists in 2006

Das Kämpf, self-published in 1963, is considered to be one of the first underground comic books. It even invented a genre: the comix!

(Underground comix are small press or self-published comic books which are often socially relevant or satirical in nature. They differ from mainstream comics in depicting content forbidden to mainstream publications by the Comics Code Authority, including explicit drug use, sexuality and violence.)

The work’s form was also a way for Bode to thumb his nose – or stick his tongue out – at a well-known comic strip author.  In December 1962, a little book called Happiness Is a Warm Puppy appeared in the United States.  In this book, author Charles Monroe Schulz presented the characters from his already famous comic strip, Peanuts, in a series of two-page spreads:  one page devoted to a drawing from the comic strip, and the adjacent page to a naïve (or, for some, cloying) aphorism on happiness that began “Happiness is”.  Published in time for the holidays, the book was on the New York Times best-seller list until October 1963 – this was also the beginning of a very long list of illustrated books by Schulz that would become world-wide best-sellers, but that is another story….

Bode’s response to Schulz’ saccharine humor was a series of illustrations that did not depict happiness, but war.  He substituted the leitmotif “Happiness is” with “War is”, declining, frame after frame, a view on “war” that was alternatively and simultaneously derisive, acerbic, ironic, blasé, cruel, despairing, and tender.  The soldiers he depicts are human beings motivated by what are often base desires, as well as toy soldiers who follow orders without knowing why.

But WHY in French?

The French reception of Bodé could itself be the topic of an article.  Unlike his contemporary Crumb, who was discovered in France in 1968, Bode was not published in French until after his death. Despite his notoriety in the underground world of the late seventies, he was not known to a larger French public until January-February 1975, when he performed his Cartoon Concert (during which he played all the character parts of his comic strips, as they were projected frame by frame onto a screen) at the Festival d’Angoulême and the Louvre. Futuropolis published Bodé, a book in black and white, in its 30x40 collection in the fall of 1975, three months after his death. Outside a few sparse pages dedicated to him in Phénix, Pilote, and Métal Hurlant the year of his death, and a few others in Epic in 1984 and 1985, the only comic book to be published under his name in France was Erotica in 1984 (Albin Michel).

Yet, thanks to many comix-lovers, Dǎs KämpF has always enjoyed in France a kind of sacred aura.

You generous gifts will help us print the book.

At first, we wanted to print out a small run for hardcore fans of Bodé. But we met so many people who were excited about this book that we decided to make a larger run (at least 2500 copies).

Let's be honest, it was a bit too much for us.

But, as Browning said, "A man's reach should exceed his grasp"!

So we are doing it!

Help us bring this gem back to life!

"A little help from mys firends" - you get one postard! Yay!

"Gimme a hand" - you get five different postcards! Yay!

« Iron fist ». The book, the postcards... and a poster. Coolcoolcool.

"V for Victory". All of the above and TWO posters. The cool never ends.

"Fingers in the nose". All of the above. And two extra copies (that is, three copies!). And you will be included in our publishing house's very own "Hall of Fame".

"Reach for the stars". All of the above... and your name will appear in the book. As a thank you. For you are a good person. Limited time offer: ends on October 12nd 2013.