Support the Twin Cities Tour that celebrates 10 years of friendship between Charlottesville and Besançon. 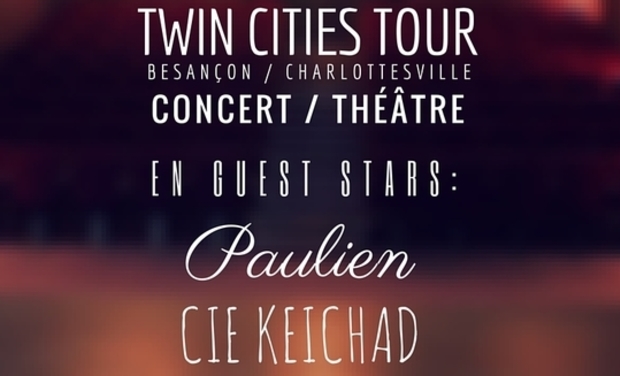 From April 5 through April 9, 2016, the Scenacle Theatre,located in the old town of BesanÁon, will propose  several concerts of "Chansons Françaises" by Paulien, a Dutch-American citizen who lives in Charlottesville, and an American play, named "Providence", from a text written by Neil Labute and performed by actors from Besançon. Through the week, aside her concerts, Paulien and her musicians will meet with high school and University students, and with  Seniors from local clubs.

The "Twin Cities Tour in Besançon" is a project initiated by 3 lovers of Charlottesville: Jean Eberhard, Quentin Juy and Loïc Mazet:

- Jean Eberhard, former head of a Business School in Besançon, is since 2009 an active member of AFC - Alliance Française de Charlottesville.In 2010, he organised in Virginia, a French Theatre Tour for a Company from Besançon and in 2014, a Music Tour.

- Quentin Juy, performed during the Theatre Tour in Charlottesville. Everyone still remembers his great performance at Old Cabell Hall and at Live Arts Theatre in plays by Marivaux and Feydeau.

- Loïc Mazet, is a student at UFC -University of Franche-Comte.In 2010, he spent 3 months in Charlottesville for his in-company project in order to get his BA diploma from IUT GEA.

Each of them enjoyed Charlottesville, the City, UVA Campus, the francophile atmosphere, the friendly welcome they received everywhere...

When they met in Besançon a few months ago, they shared the idea of a project that would celebrate the links between the two cities, with the help of students from Loïc former school, IUT GEA. First year students, Vanessa Picard, Manon Hergott, Clara Renault, Jane Vincendeau, Lucie Tétu and Alexandre Petit-pas, joined the project and are coached by their Professor, Mr Jean-Paul Maujean.

In supporting the project, you will help them to pass their first year final exam!

Paulien comes to Besançon with two of her five musicians. Matty Metcalfe, accordion and Rick Olivarez, guitar.  Two talented musicians from Besançon, Vladimir Torres, bass and Damien Groleau, piano will complete their band. Gerard Brikkenaar van Dijk, her husband, who produced her album "Chez Moi" will escort them. Paulien will give 4 concerts from Tuesday, April 4 through Friday, April 8.    From her youth in Holland,where she was born,Paulien remembers the usual family summer holidays in France where she discovered the French Language.  She easily says that she loved it at once for his poetic rythm. At the age of twelve she found herself involved in a song competition in Holland. She won it with a popular tune of Françoise Hardy...  Years have passed, Paulien is a successful singer of French and American songs in ...French, in Dutch and in English. She made a full House for her two last shows at the famous Blues Alley in Washington D.C.! Her exciting dynamic showcase of French/American songs from the past to the present will conquer Besançon.

Providence is a text written by Neil Labute. It takes the reader back to the dark days of September 2001.  An illegitimate couple lives hidden in a condo in New York City. Facing the dreadful chaos that suddenly happens in lower Manhattan, they decide to change of identity... The three protagonists on stage make the audience share this amazing situation where lies and manipulation impact choices and decisions for the future...

Muriel Racine:  Professor of theatre at The Regional School of Music and Drama of Besançon, Muriel is an accomplished actress,

who performed in numerous plays such as Romeo and Juliette, L'avare or L'Ecole des Femmes de Molière  .

that will allow him to create and to pass his broad experience to others.

Lou Chavanis : Actress, producer, photographer Lou is in charge of communication at Le Scenacle too.

She is driven by looking forward to finding true meanings and poetry in her daily life.

The place where everything is possible:

Le Scenacle: Will host most of the events and meetings during The Twin Cities Tour. It's a venue dedicated to creation and innovation located in the old town of BesanÁon. In its premises, every dream linked to Arts can become reality!

This American week is also placed in the heart of a project tutored by a group of 6 first-year students in Management of Companies and of the Administrations of Besançon.  You thus have the opportunity to help them, by participating in the financing of this event which is important for their passage in the second year.  They have for objectives to promote this event and are supervised by professionals of the culture and the communication as well as their professor.

They count on you!

Twin Cities Tour is carried by the Scènacle association and benefits from no help on behalf of the City or of the Region. That is why we call to you today.

To favor the access to the culture and the promotion of cultural exchanges appears to us as a priority today, it was then impossible to us to give up this magnificent project. So, by contributing to the financing of the Twin Cities Tour you will become cultural actors and benefactors of this exchange and those to come. Indeed, the project exceeds the frame of this week to Besançon, the idea being to set up a real exchange between Besançon and Charlottesville which will be long-lasting and enriching for all!

To cover the expenses related to having Paulien and her musicians come to Besançon, to marketing the event and to strengthening our technical staff, we need 1,200 €. We do appreciate your help for balancing our budget.