Suport the art project from the school Mi Otro Mundo in Peru and help the creation of a totem by famous Peruvian artist Alberto Quintanilla! 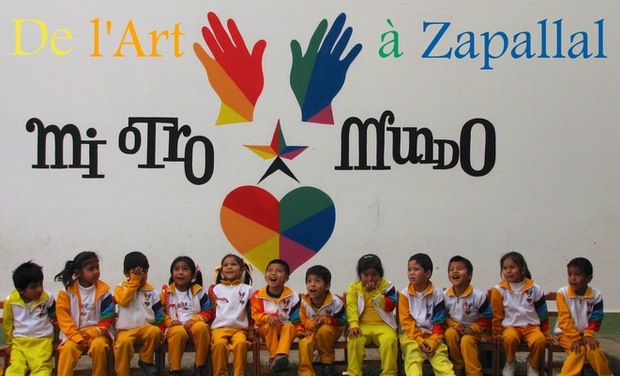 Who are we? Mi Otro Mundo is a local initiative which aim is to improve the life of a disadvantaged community of Zapallal, a shanty-town of Lima. The local population of Zapallal faces a challenging social and economical situation, and education is key for them to get a chance to start a better life. Unfortunately, education is often neglected by the inhabitants and by the authorities and put in the back seat. This is why Mi Otro Mundo's objective is to boost children and adults fulfilment through an educational, social and cultural hub. We have the drive to fight the feeling of ignorance and reinforce self-esteem of the local population as well as an initiative-oriented outlook. We want to help them building a brighter future, this is why we have worked hard to bring the ambitious "Art in Zapallal" project to life.

The school Mi Otro Mundo. To get more informations about the project and the actions of Mi Otro Mundo : website and blog.

Why do we want to do this? For the past 8 years, our non-for-profit organisation has been dedicated to provide a qualitative education to the children and reinforce the bonds within the local Zapallal community. In September 2014, Mi Otro Mundo celebrated its 8th birthday, a great opportunity to give a present to the children, their parents and all the volunteers that have been working hard to make this project possible.

This present is coming from the Peruvian artist Alberto Quintanilla del Mar. Originally from the Andes and French at heart, Alberto Quintanilla has a strong connection with Mi Otro Mundo. It is with greatest honour that the artist has offered to dedicate his talent for a good cause and sculpting totem for the community. It is a big privilege for the local community and our organisation to get the attention of one of the most creative artist from the 21st century.

A great Peruvian artist supporting Mi Otro Mundo. Alberto Quintanilla del Mar is a skilful artist with many talents: drawer, painter, sculptor, poet, musician, singer and storyteller. Born in 1934, he studied at the school of fine arts of Cusco and then at the National Art school in the capital, Lima where he won the gold medal in 1959. In 1961, he obtains a grant from the French government and move to Paris to pursue his art studies. In 2013, the UNESCO acquire one of his painting "El sueño de la Tierra". Since then, he has been considered as the voice of a the south-american people and culture.

His universe inspired by Peruvian heritage. His art is influenced by the south-american mythology and culture. He sources his inspiration from traditions, myths and fantastic characters from the Inca tradition and the Quechua universe. His origins and roots are an endless source of inspiration for him. Alberto Quintanilla's art is built around the Peruvian heritage and identity. He is a strong believer that one needs to know his own history to make great art, and that you have to consider it as a means for integrating society.

The project. The idea is to create a totem representing the 4 regions of Peru, showcased from the History of civilisations perspective. This project forms an integral part of the cultural problematic in Peru, where traditions are neglected. Built during the rural migrations, the shanty-town of Zapallal is an unfortunate example where the cultural identity is completely disregarded.

The different faces of the totem, representing the cultures in Peru.

The art to reinforce self-esteem. In this neglected area where feelings of helplessness, ignorance and frustrations are strong, culture is an undeniable vehicle to develop personal fulfilment. The totem will become a strong symbol to reinforce children's self-esteem and will be a aesthetic element at the heart of Zapallal. It will reinforce the local population's pride and dignity, by seeing Alberto Quintanilla bring up his talent and creativity to their doorstep. Meeting this greatest Peruvian artist will be a great occasion and event for Mi Otro Mundo and the local community of Zapalllal.

An History and Culture vehicle. This totem, highlighting the Peruvian cultural wealth, will stand for strong values such as sharing, cultural identity and solidarity. It will help the local community to question the meaning of the totem, their history and their cultural background and identity. It will also allow to awaken the children's curiosity and interest, inspire them and might even give rise to vocations!

Culture in the service of education. This totem is part of a global educational objective and will constitute a teaching tool in its own right: it is the first stage of the creation of a book of tales for children, explaining the history of each totem's face. The illustration of the book will be created by the children. They will also undertake the creation of a mural-painting together with their parents and the rest of the local community of Zapallal, in order to reinforce the bonds between all these players. We want to bring them together in an artistic project that will embellish their environment.

The funds raised will be used to produce the totem: buying raw material (1000€), preparation and sculpture (500€), varnish, transportation, totem's base (400€). We will also use the donations to fund the educational activities that will come out of the totem's creation (1600€) : editing the book of tales, animate illustration workshops for the children ; organise the realisation of the mural-painting to gather the local community of Zapalllal around this artistic and cultural project that will improve their environment.