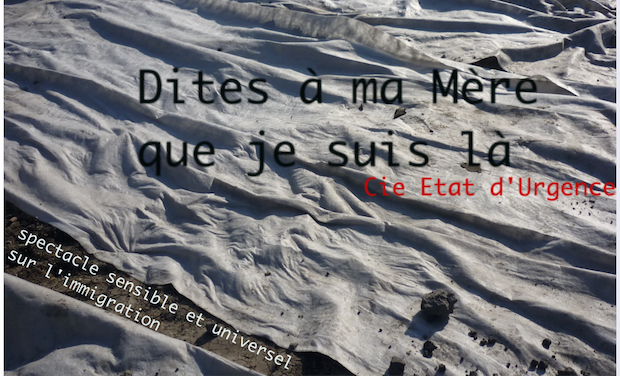 The «Etat d'Urgence» (State of Emergency) company has the objective to create a singular, original and contemporary performance.

Amanda was on the initiative of this project. She has done her research in the field with refugees and immigrants in Europe. She developed a thesis for the ISCTE in Lisbon University, Award of Excellence and honour of the jury and published by UNODC (United Nations Office against Drugs and Crime in Brazil).

This is a multidisciplinary project (dance, theatre, circus, video) that takes its innovation to adapt, interpret and treat a topical subject: the human and the world, in a participatory approach.

·      Speaking in a language that tends to universal on problematic of borders, migration and walls that separate our humanities.

·      Transform our personal vision, break out clichés, and build bridges with our experience to reach a wider vision.

·      Awareness a wide audience, make them responsible, as an inseparable part of this symbolic system that rejects the difference and condemned to death or misery of men, women and children.

·      Conduct field actions, regional, national, European or international on that which founds the rejection of others to learn, to meet, to discover, without judgment or hierarchy, talk without fear or hate, to share our emotions, our cultures...

OUR PRINCIPLES OF ACTION:

·      Meet, listen, discuss, exchange and interview the people that we will meet (migrants, residents, associations, traders ...)

·      Immersion periods in the refugee camps. These immersions will be conducted with field’ agents and associations to give voice to immigrants through interviews.

·      Propose an exchange time about our know-how: dance happenings, dance, acrobatics, theatre workshops and conferences, all developed on the theme of living together, suitable for all kind of audience.

·      While, the creation process will be followed by the eminent sociologist Abdelhafid Hammouche, professor at the University of Lille 1, in order to produce a travelogue, a book, object that will remain.

·      Share a scientific approach, sociological, political and human on the situation of migrants and refugees in Europe’s immigration and asylum system (Frontex, Eurodac, Dublin agreements, etc.) through readings and workshops.

The crowdfunding will allow us to progress in the production of this great project.

At this moment, we have part of our budget but we still need 3,500 Euros to cover expenses related to the video, soundtrack and set creation.

Despite our efforts, we have not yet succeeded to close our production.

The spectacle has great chances to live thanks:

This contribution will serve to cover essential expenses of the creation of this project. Specifically to:

·       1000 € record and editing the soundtrack from interviews gathered in refugee camps and in cities and neighbourhoods where we will be hosted.

SO WE NEED YOU TO SUCCEED!

If luckily the money raised exceeded the amount of € 3,500, the excess will be used to cover travel and meals costs during our creation residences (Aix en Provence, Apt, Gap, Port Saint Louis du Rhône) and immersions (Calais, Dunkerque).

THANK YOU so much for your help!