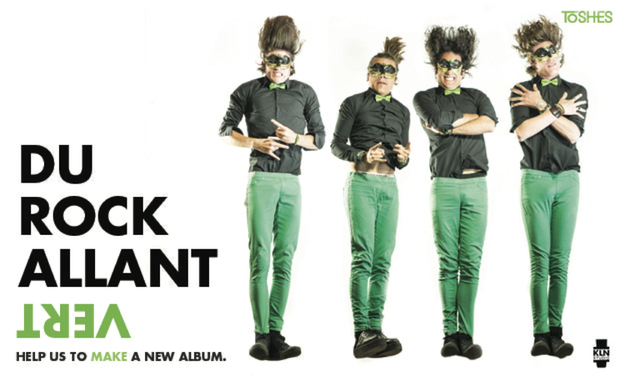 “We started the band back in October 2012 with the ambition of bringing something new to the table, as regards to music but also to live performances.

Toshes as a project is meant to provide our listeners with a fresh perspective and an offbeat world view. Don’t be surprised then if we are all about green and black, since those colours symbolize unity as a core value of our band. As to the venetians masks, they simply refer to the “social mask” people wear every day and that we encourage you to take off.

Our story as a band began in the middle of an industrial estate of West London, where you could find a tiny recording studio. Well, we used to live in this studio 24/7, which has deeply influenced the making of our forthcoming album. We can’t wait to have you guys listen to it.” Toshes

- Precious Junk (from the mini-album «The Mask We Wear»)

The funds collected will finance :

- The mix - included in the studio fees

Now you know as much as we do. Should you have any questions about this budget or the projet, we encourage you to reach us through our Facebook page. We will answer them the best we can.

After less than 2 years of activity, Toshes announced a debut 12 tracks album shaping up to be an explosive mixture of different styles and influences.

Following the success of their first crowd funding campaign, which led to the release of the EP “The Mask We Wear”, the band is now taking on a far more ambitious goal and will begin the recording of this album in September 2014.

Currently touring France to support the release of their EP, the band’s members have been working on the album’s tracks for almost two years. They are row ready to deliver a record that will light up your senses, whether you are listening to it at home or hearing it live.

“We have cooked up something really wild and versatile, without caring too much about rules. We wanted to create something unique that embodies both the energy and the straightforwardness you should expect from a good Rock record. This album will lead to the biggest tour we have ever done, with shows close to your hometown as well as in other European countries.

And it is only through your support that we will be able to accomplish all that.” Toshes

OUR SPONSORS AND PARTNERS :

ASPIRING SMOKER MAN ==> Digital album - high quality (mp3 320Kbps, FLAC or AIFF) // « You are still bum puffing but we love you anyway, welcome to the family ! »

PRECIOUS JUNK(IE) ==> album pack + EP, both signed by Toshes // « For those who are completely hooked on Toshes and sing our songs in the bathroom. »

GREEN PEOPLE ==> Precious Junk(ie) pack + digital album available one week before the release + T-shirt + poster // « Grab the "Green People" pack and reach cloud 9 one week before everyone else ! »

THE SURPRISE ==> Green Virus Ambassador pack + special thanks on the album's booklet + surprise picture of the band // « Surprise !!! »

ADRENALINE ==> Green Virus Ambassador pack + 2 tickets for a concert of the 2015 tour + backstage access + skype session with the band // « Toshes live, even better than Ryan Reynolds in Green Lantern ! »

BIG BOSS'S PACKAGE ==> Toshes will perform in your office or in the venue of your choice (travel expenses not included) // « For those who want to see the Toshes' tour bus turn up at their place ; ) »