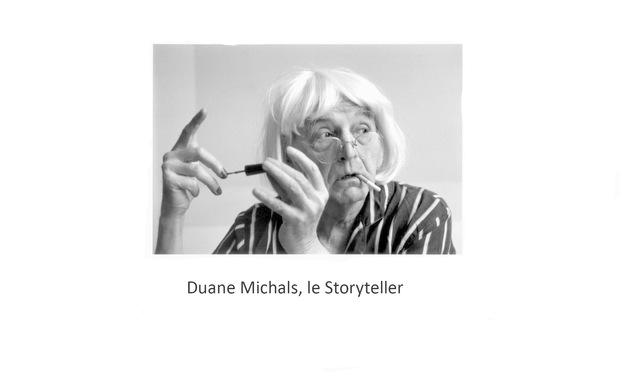 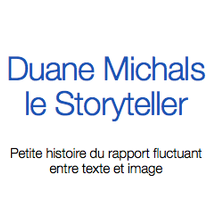 A short story: the fluctuating relationships between texts & images...

This book is a manifesto. A manifesto for a contemporary re-reading of  Duane Michals' photographs. This 83 year-old photographer created a unique work, mixing writing, photography and painting. Even though he receives great attention from the American public, his work has been rarely exhibited in Europe, especially if one considers his vast production and his considerable influence on young photographers.

Starting from this unusual artistic process, the book I wrote is dedicated to a broader issue: the relationships between texts and images. It starts with a bustling cultural period -in the 1960's-1970's- , a time when the notion of mixed-media artist spread, a time for new artistic groups such as the Narrative Art, and ends in the 2000's with the development of interconnected texts and inages, questionning the input of new technologies.

Having witnessed a need for narratives, a need that appeared approximately thirty years ago, and the necessity for artists and critics to write stories, within or about the art, I decided to work on the changing relationships between texts and images throughout the last fifty years.

Because today museography has to be written the way stories are. Because curators have to be writers, exhibitions have to be stories and photographers have to explain what they mean, to tell their tales... Because new media and new technologies had a tremendous impact on the conflicting relationships texts and images entertained. And mostly because looking at the younger generation of photographers made me realize a fact one cannot deny: we are definitely sitting in a new era: the era of photo-graphs.

How was it financed:

I self-financed years of research and three trips to the U.S., investing over 5.000€ in this project. What initially started as a misunderstanding and a phone conversation that lead me to believe that Duane Michals was suffering from a mysterious illness turned into an impromptu visit to his gallery to introduce myself and this project that was, at a time, but a mere blurb on a sheet of paper.

During the 2014 summer, I bought a plane ticket with not much more that a large smile and an essay I had written during my finals and that had not been touched for years, and flew New York City.

Things unfolded very quickly and little did I know that Filigranes Publishing would trust me on this project with not more than a short explanatory note. As luck would have it, Duane Michals' assistant chance visit to the gallery turned out into a three-people interview then into a dialogue that finally brought me to Duane's front-door.

Where are we at?

Filigranes and I have worked on a mock-up for the book, to help the graphic designer and give him a direction. He's now working on the final dummy. The text has been done for months and everything is now close to be printed.

The book will get published in November, 2015 to be launched during Paris Photo and will be available in librairies in early 2016. We are planning on a little get-together event for the launch. oping that Duane Michals will meet us on the way!

Duane and I, in December, around Christmas under the snowy snow of New York city..

1500 € for all reproduction rights

Three sponsors decided to support this project very early, giving 3500 € while the Filigranes Publishing House finances parts of its budget.

The book was presented in Florence during the "Critical studies : Asking big questions again" conference - http://euroacademia.eu/presentation/duane-michals-writing-with-photography-hybrid-prints-a-pun-of-text-and-images/

The crowdfunding campaign will help finance the reproduction rights and the editorial follow-up.

Your pic in the face book of the project and thanks to you all!

A sticker with a quote by Duane Michals to be chosen amidst... Those 3 options: "All his life he believed all the lies white men had told him" "Upside down, Inside out and backwards" "There are thing here not seen in this photograph"

Un livre dédicacé par l'auteur + Un sticker d'une citation de Duane Michals au choix... Parmi ces trois options : "All his life he believed all the lies white men had told him" "Upside down, Inside out and backwards" "There are things not seen in this photograph"

A book signed by the author + A postcard / portrait of Duane Michals with a toilet paper turban, shot by the photographer Laure Vasconi

A book signed by the author + A postcard / portrait of Duane Michals with a toilet paper turban, shot by the photographer Laure Vasconi and signed by both the artist and Duane Michals

A book signed by the author and Duane Michals + A postcard / portrait of Duane Michals with a toilet paper turban, shot by the photographer Laure Vasconi

A book signed by the author and by Duane Michals + A postcard / portrait of Duane Michals with a toilet paper turban, shot by the photographer Laure Vasconi + A surprise present by Filigranes editions

A book signed by the author and by Duane Michals + A postcard / portrait of Duane Michals with a toilet paper turban, shot by the photographer Laure Vasconi + A surprise present by Filigranes editions + Your name in the book