Help us to fund our dance-theatre creation on KissKissBankBank ! 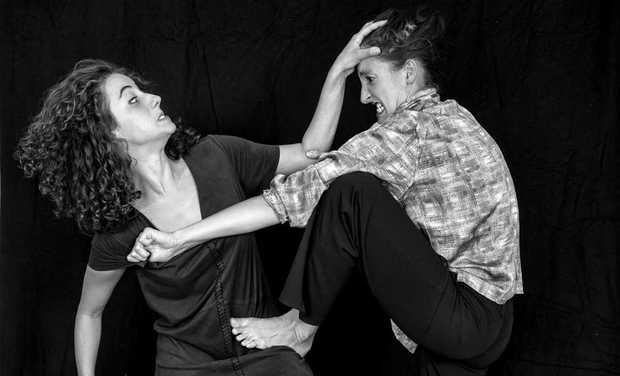 In this new choreographic research, Anouk Orignac proposes to explore the feeling of anger with the help of two dancers, Alice Thomas and Juliette Adrover.

Two women confront each other and confront their fears, their desires, their contradictions. It is a conflict with one another as well as a conflict with the self, and what explodes like fireworks is the inability of speaking.

In between clownesque theatre and a distraught dance, in between loneliness and complicity, Anouk Orignac proposes a staging of angered bodies, sounds, rhythms and voices.

How does our anger get heard? How do we transform it?

These two questions arose at a time when angers accumulate, - whether they are social angers, political angers, or angers carried out by all bodies and all cultures -.

We decided to stage two women confronted to their own angers and to those one of another. A choice which engages to debunk some of the caricatures brought about by social representations which are associating anger to a male character and most of the time, angry women to hysteria.

We began our research about anger during three short residencies in Essen, Germany, in Granada, Spain and in Toulouse, France. Today we would like to finalize this research by creating a choreographic piece : Duo NRW.

To achieve this month and a half of residency as well as possible, we need to collect some funds in order to finance this work ; and today we need your help !

Several years of collaboration led us to carry out various choreographic and multidisciplinary projects between France, Germany and Sweden. We created the ensemble Agbaza in 2016, a dance company structured by the Danzón Association.

What is there to be said? How? These two questions are at the roots of each one of our researches. We approach these two questions with our various backgrounds and with the gaze we’re carrying on what’s surrounding us.

Anouk studied dance, guitar and theatre at the Conservatory of Toulouse. In 2013, she pursued her dance education at the Folkwang University in Essen, Germany. During her studies, she danced several repertoire pieces such as Le sacre du Printemps by Pina Bausch, Fielding Sixties by Merce Cunningham and of The Vile Parody Address by William Forsythe as well as new creations by Szu Wei Wu, Mark Siescarek and Rainer Behr. In 2017, she joined the Folkwang Tanz Studio where she worked with choreographers such as Malou Airaudo, Stefan Brickmann, Reinhild Hoffman. In 2019, she joined the Weld Company in Stockholm for choreographic projects from Samuel Feldhandler and Yvonne Rainer. She began to develop her own choreographic work in 2015 and built the ensemble Agbaza.

After her studies in ballet and contemporary dance at the Conservatory of Toulouse as well as in theater, Alice followed a performing arts education at Toulouse University 2 and a further dance education at Paris 8 University. She is interested in art hybridization and begins to question limits between theatre and dance, between text and body. A research that she continues to develop within the ensemble Agbaza. In 2019, she goes to Spain to deepen her practice of the flamenco and works with artists such as La Tatí, Raimundo Benitez, Cristina Aguilera.

Based between France and Germany, Juliette studied ballet and contemporary dance at the Conservatory of Toulouse. She danced with several choreographers, contributes to multidisciplinary  projects in the frame of European programs hosted by Echodramas Cultural Group and brought her interest to afro-contemporary dances after working in the Ecole des Sables, Senegal, with choreographers such as Germaine Acogny and Irène Tassembédo.  In 2017, she graduated a Master in philosophy at Paris-X Nanterre University where she led a research about history through the concept of image, about our capacity to think history through the medium of arts. She is integrating this research in her own artistic work with her partners from the ensemble Agbaza.

The collection will serve to fund all the costs resulting from six weeks of creation between Toulouse, Lyon and Essen.

If the collection exceeds the amound requested, we can consider to pay us more reasonably and to follow up the project (tour, staging, costume, video material etc…).

An original photo of the creation sent by email, an invitation at one of our performance in Toulouse, Lyon and Essen, with a surprise at the end and an original drawing sent to your home

An original photo of the creation by email (photo: Xavier Orignac)

An original photo of the creation sent by email and an invitation at one of our performance in Toulouse, Lyon and Essen, with a surprise at the end

All the previous gifts as well as a dance class with five persons of your choice given by the team !