HELP US TO REALIZE THIS ROAD MOVIE IN SAM PECKINPAH AND JOHN WAYNE'S FOOTSTEPS ! 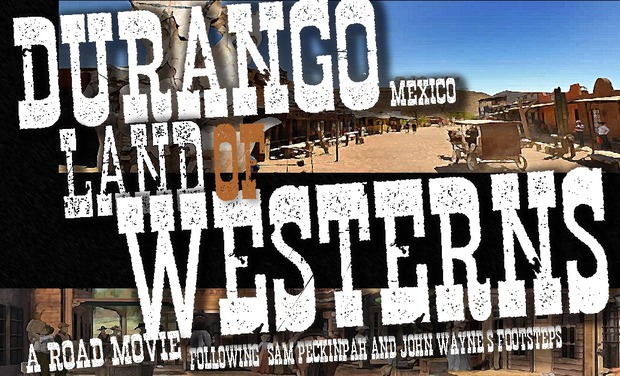 Two Rooms at the End of the World

This project springs from the deep friendship between Claudia Goytia and Michel Rocher, who have worked together for many years.

The work resonates with a love of Mexico and its rich harvest of the arts.

In Mexico, music comes from the sky and the earth offers unique decorative beauty.

Each of the 32 states has its own style that you could explore a thousand times, while still having something to discover.

The state of Durango, where Claudia was born, is one such, it’s her land…

Film sets are like characters in themselves. If they lack finesse, the film cannot succeed. We propose that without their magnificent sets, the great, classic Westerns would not have been the same.

A documentary of 52’ quickly demonstrates the diversity and use of these locations.

The primary concern was to secure the cooperation of Juan Carlos Lazo. He is a master of the image and currently one of the best in Mexico. By putting the locations, sets, and their creative arts in the context of some of the films, his images highlight all that we wish to show you.

You will be able to put yourself in the place of location scouts who chose the natural scenery that allowed the directors to bring their dreams to life.

This film is a journey that respects the rhythm of the traveler, taking time to rediscover that which they so loved in the films: it’s like going to Monument Valley and putting yourself in John Ford’s place. We track the still-fresh imprints of Sam Peckinpah and John Wayne’s shoes.

We hope that you will join us on this adventure, getting a taste of the Mexico that we know and love so deeply.

Bon voyage! Have a great trip!

Since 1897, the state of Durango in the Northwest of Mexico, has been a favorite location among the directors of great Westerns thanks to its magnificent landscapes. The consistently blue skies have just enough cloud to create a backdrop without overwhelming the scenes, and the omnipresent sun creates a naturally dramatic light.

The road was laid as early as 1914, when Mutual film signed an exclusive $25,000 contract with Francisco Villa to film and stage his major battles as he advanced towards the capital.

Here, Raoul Walsh chose to film and record the exploits of Pancho Villa on 35mm film, almost all of which has unfortunately, now disappeared.

The story goes that in 1954, Jack Martin Smith, who worked on the sets for Robert Webb's WHITE FEATHER project, sometimes piloted his own plane over Mexico, scouting for new locations to film.

Mexico was a land of opportunity for studios looking to lower production costs and diversify locations. The state of Durango, with similar landscapes to those of Wyoming, Texas and Arizona, was an obvious choice.

During the Holy Week of 1954, the Mexican peso fell dramatically, becoming further grounds to go south, not only to find new locations, but also profit from the local craftsmen and artisans who did not need to be told what a hacienda or Mexican church should look like.

The Mexican government saw the opportunity and offered filming conditions that the studios could not refuse. Everything was cheaper than in the United States; hotels, transport and of course the stylistic authenticity which marks the Westerns produced at that time. This authenticity of setting gave credence to the other actors working alongside the stars of the time.

“We could film without changing anything about the décor or disturbing the local inhabitants who were few in number miles around.”

From 1954, Durango became the favorite back lot of Hollywood studios and international film makers, not only for its sets and locations, but also due to the professionalism of the Mexican teams and the technical proficiency they acquired.

On January 5th, 1965, John Wayne began filming "THE 4 SONS OF KATIE ELDER" directed by Henry Hathaway. Wayne fell in love with Mexico who first acquired a residence in Acapulco, then Durango, where he bought himself the 1500-hectare ranch, “La Joya”. He transformed it into the main set for the five films he shot there over the next ten years, until his death in 1979.

Several years after the death of the actor, the ranch became the property of his former employee who had remained on the property, without pay. He was rewarded after brief legal proceedings, and was then able to develop the ranch for commercial ends.

The documentary begins inside the dilapidated house of Dolores Del Rio, with the actress doing the voiceover. She will be our guide throughout our journey between movie clips and beautiful pictures of these cult locations…

Here is a demo

Started his career as a theatrical projectionist in 1973 and studying direction and edition. Joins the national TV Antenne 2 (France 2) for broadcast quality control (1978-1984.
From 1984 to 2003 as part of the early team of Canal + the first french pay TV as technical director cinema, and then create Studio canal+ services as vice president technical services (servicing. dubbing), assets, library preservation and theatrical.
He converts Studio canal+ services as a profit company after two years with a crew of more than 30 people based in Paris, London, and Los Angeles.
As a preservation passionate and specialist, he initiates all the majors 35m/m negative restorations of the Buñuel’s, Fellini’s CABIRIA'S NIGHTS, Godard’s CONTEMPT, the Claude Sautet’s movies, Melville's RED CIRCLE, with internationally new theatrical presence (“Cabiria’s nights “, Contempt” released and presented by Martin Scorsese)
After 2003, he joins the Mexican artist Juan Gabriel as personal director and art designer for the live shows conception.
Directs some music videos (“inocente de ti”)/ and videos for the live shows, plus personal videos
At the same time produce/direct documentaries (“un angel en el paraiso” 52´ 2005) for his own Querida productions.
In 2009 He create Pi-Xhel films dedicated to productions services in Mexico producing cartoons for Cartoon Network LA.
He joined 3dLiveFlix from 12/2010 after developing a 3D process organization in Mexico and converts 30 minutes of “Conan the barbarian 3D”.

one of the best DP in Mexico !