A humanitarian project with an urgent message on life, death, war, friendship and integration. 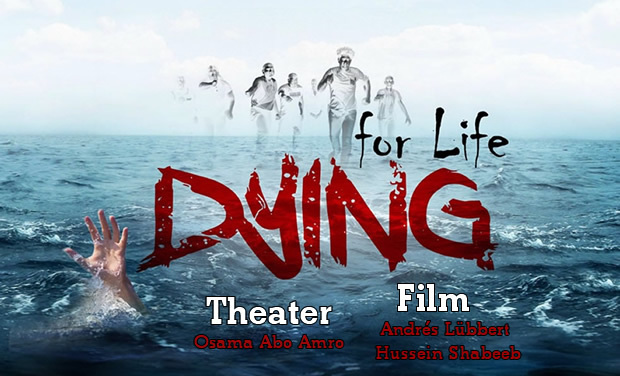 The Syrian director, Osama Abo Amro, wrote his play 'dying for life' while he stayed in the refugee center in Kapellen.

"I admire his sense of creative expression while he had so many problems on his hands. (security of his family in Aleppo, his wife and newborn child, who are still separated from him.)"

Osama has been looking for companions with a common story and he taught them how to act in his play. The first order priority for Osama is to make people aware of the war in his country. His uses art to convey a message. When you're watching "Dying for life" at times, you can feel the mix of emotions that Osama carries with him. They don't leave you alone. It is a cry for help, to be finally heard.

With this documentary "Dying for life" Hussein Shabeeb and I, Andrés Lübbert, want to sketch a different image of the idea of a refugee. Osama and Dara, the main actors in the film, are always smiling, although, they have many problems. They want to prove what they represent to society. One example, to illustrate their drive, to make progress, to become independent, is the following story: while Dara, was still in the refugee center, and even had no papers, he was already invited for an interview, to become integration instructor. An interview which he completely did in Dutch.

The documentary gives a unique view of integration through drama. It shows through an intercultural dialogue- as a process of inclusion- how shared meanings can be generated through drama. In the parallel story line, we come to discover how Osama and Dara, in their human quest seeking to be accepted, in a society that is afraid of them and which is full of prejudice and obstacles.

I am Andrés, co-director of this documentary. We all have a common history of fleeing, that perhaps unites us. But we are also common people from Antwerp, who try to find, their artistic itinerary.

Osama and Dara, main actors in the theater project, arrived in Belgium, about 10 months ago. They were fleeing the war in Syria. Co-director of the documentary Hussein, fled Bagdad 10 years ago, looking for a better existence. My father, came 38 years ago, through Europe, because of the Pinochet dictatorship in Chile.

On October 23, the play and a work in progress of the film will be shown, as part of the "Mestizio Arts Festival" in the Arenbergschouwburg in Antwerp: http://mestizoartsplatform.be/event/dying-for-life/

"Thanks to the support of KunstZ, an intercultural theater group of Borgerhout, Osama could develop his idea, and his play "Dying for life" was born. There is a lot of interest to have performances at several places, but we lack some financial support, to pay production costs, such as transport, accommodation and other technical matters. We hope that with your support we will be able to present a project in all of Belgium and in other countries as well.

From the beginning of the creative process of "Dying for life" we have been making a film, in which we see, how Osama and Dara, progress through their daily life. We also see, how the play comes into existence. We filmed everything with our own material, without budget. Now, we want to finish the film. For the post production fase, we really need you. There are basic costs such as color correction of the film and the costs for original music. The money collected will be distributed equally over both projects. The budget is flexible. This means that any surplus will be well spend. The goal of this action is to obtain a minimum, with which we can start. But the reality costs will be a lot higher. This means, the more we collect, the easier it becomes for us, to cover all costs.

The minimum costs are:

The editing is an investment of our own. If we obtain a broader budget, we will invest this, in hiring a cameraman, for a few extra scenes, for the cost of 1000 euros extra.

If there is more budget available there will be more opportunities to travel for the group.

The costs for using this site, are about 500 euros. That means, about 5 % for this website and 3 % for bank costs. We obtain a grand total of 4500 euros which we want to collect.

We would like to thank our partners KunstZ, Mestizo Arts Festival and Arenbergschouwburg.