Support a contestant who takes on the most dangerous television assault course contest ever made. Will he survive and claim his reward? 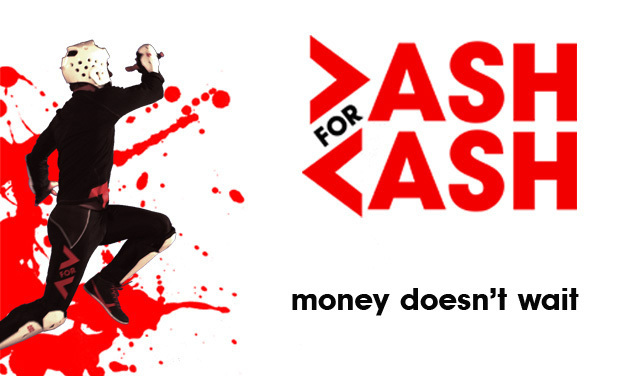 Win TV is a YouTube channel featuring games that are devoid of scruples to attract high audience ratings and arouse the interest of bored TV-watchers. What if one of the channel’s games was truly dangerous?

In DASH FOR CASH, the channel’s first game, the competitor makes his way through a series of obstacles in the pursuit of a cashbox which risks disappearing from the contestant's grasp as the clock is ticking.

Shot with several cameras like a TV show, the game gradually becomes more and more extreme, finally turning into a life-threatening ordeal.

After training at the prestigious Drama Centre London and he has worked with directors such as Sam Mendes and Damien O'Donnell. Subsequently Sean won the "Best Actor" award at the Newport International film festival for the feature "The Sky in Bloom". Sean has also worked for television (BBC, History Channel) and recently appeared on the last Season of the series 24 alongside Kiefer Sutherland. Although his character did get killed at the end of the episode. Also, he actually used to run for England and was so fast that he was really known as the 'Silver bullet'.

A true blonde, she has played the bimbo on TV shows like Caouet, and commercials with silly yet sexy jokes. She also stars in this year’s ‘Africacorse’.

He plays a really weird man in ‘TOUT EST FAUX’, and a funny producer in Guiraudie’s ‘Rester Vertical’ selected for Cannes this year. He also wrote his own play in which he stars, practically naked, and always smiling ‘Les Chaussettes rouges’.

Your contribution is essential to complete the film! Do you hate trash TV? Do you love dark humour? Help us finish this bloody short! Film horror buffs, promote new blood!

We shot most of the film with the SACD/Youtube grant (5000 euros) with an extra investment (mostly personal) of more than 10000 euros which enabled us to pay for the studio, the shooting material (2 RED cameras), the set design (we built a 500 meter obstacle course) and props (9 obstacles and deadly traps made for real and in VFX). However, we need to finish the film's post-production with your help.

We need your help to edit, work on over 50 shots with photorealistic visual effects (involving the creation of extensions and virtual sets), sound effects, foley, music and motion design, grading and sound mix.

As usual, a small part of the budget will go to creating the cool rewards (20%) and to KKBB (8%). This is the minimum budget we need to complete the film. It will be awesome for YouTube!

This budget would allow us to have a more polished final product,with highly defined photorealistic visual effects and more graphic creation. With 5000 € we can work in a proper sound studio, have a professional grading and make a DCP copy of the film. With this budget we can do things in the best way possible and guarantee a top notch finish for the big screen.

It will allow us to distribute the film to a larger number of festivals.

We will also develop the website properly, as well as the mobile game: It will look something like this but better!

Also, if you're a game developer and would like to work on it with us, you should get in touch ASAP!

Preparing the next deadly game !

DASH FOR CASH’s young film crew will guarantee the film will both make you laugh and scare you.

We made the one below for under a grand, just imagine what we can do with more:

Music for the race

A proper fan of Cliff Martinez and old SEGA video games. He plays the Neo retro vibe to the fullest. Here is a taste of his previous work:

Fernando Ruiz, Cinematographer. Below is a link to his latest feature, 'MAY I KILL YOU' as Director of Photography, he would probably be a rock star if he wasn’t so busy working in many film and commercial projects at the same time.

He does visuals for LUDO, and animations for Radiohead's "Reckoner" music video and more...

With hundreds of films under his belt (http://www.imdb.com/name/nm2107304/) he’s the king of splatter horror in France, and the funniest make up artist out there, well, at least, that’s what she said. He works with Leo Leroyer who blows shit up, really well. And is a crazy driver. In two words, the French Tom Cruise.

TIPPER: A smile, a subscription to our newsletter, you will be the first to know what's up and you'll get the link to the film as soon as it goes online! Thanks for the tip! We'll make it up to you with some sassy images!

EARLY BIRD: A sneak peek of the film before anyone else! A DASH FOR CASH or Win TV Sticker and an invitation to our launch party at a reduced rate.

CONTRIBUTOR: One invitation to our LAUNCH PARTY where you will meet everyone involved IRL! You will be credited on the website as an official contributor to the DASH FOR CASH! A sneak peek of the film and all bonus content before everyone else! Win TV thanks you!!

EARLY FAN: A Win TV t-shirt, a +1 invitation to the launch party and a copy of the film and bonus content on a USB key.

SPORTSMAN OF THE FUTURE: Limited DASH FOR CASH top and all previous rewards. Be on the top 30 Competitor SCORES on the site. Please note this suit is not fireproof, so behave...

SPECIAL GUEST: A VIP invitation +1 to our LAUNCH PARTY. As a VIP guest, you'll get all the free drinks you want and get to hang out with the cast and crew and even meet the Win TV girls and presenter. Hell, you can even suggest him a one-liner for the short. And you might even get an invitation to his play where he plays half naked, you never know.

SURVIVALIST: A unique element from the DASH FOR CASH survival kit based on the traps used during the shoot (fireballs, darts, ninja stars, bear traps): choose from a lighter, or a pen shaped like a dart... A VIP invitation +2 to the launch party. Plus all of the above.

ELITE: The full DASH FOR CASH survival kit based on the traps used during the shoot (fireballs; ninja stars, bear traps, darts, etc…). The kit features a lighter, a dart pen, a Swiss knife and a dynamo lamp. Everything is decorated with traps from DASH FOR CASH! You're ready for adventure! Thank you for your trust. Be on the top 10 contributors on our website. A VIP invitation +5 to our launch party. Plus all of the above. Your name will also appear on the DASH FOR CASH credits!

COLLECTOR: DASH FOR CASH costume with accessories (overall, helmet and protections). There is only one left (the other one was torn to pieces during the assault course). And it was actually worn by the one and only Sean Knopp. A true collector's item and a sexy addition to your wardrobe. Plus all of the above. You're the man, 10 VIP invitations to our launch party!

PATRON: you get all access, glory, honor and a producer credit and invitations to private and public festival screenings as well as the film and all content. You will be credited on the film as the main contributors to the 'Dash for Cash'!!! You are now part of the happy few and you can invite as many people as you want to our launch party, it will be madness! I tell ya!

SPONSOR: Your brand becomes an official DASH FOR CASH partner! You will be placed during the race with a special infomercial animation or ident. You will also appear on our website! And you can promote yourself during our launch party as well!

WINNER: You can be the one and only owner of the DASH FOR CASH cashbox, used for the shoot (plexiglass). Plus all of the above and as many VIP invitations to our launch party as you want!